A Plea for Unity

People who are cynical about Christmas don’t cherish the magic of a child’s belief. 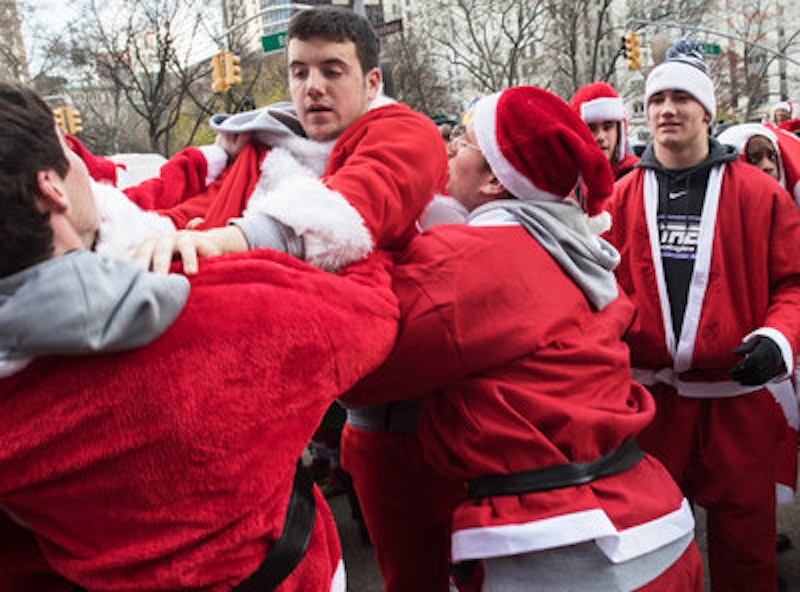 I’ve been a raging misanthrope all my life. From the first moment of independent thought, I knew that most people are untrustworthy disloyal shits. Maturing, I learned to select particularly offensive specimens and target them for vicious pranks. It’s a hobby to select worthy targets from the herd and direct my wrath at them in creative ways. I loathe bullies, and have a particular animosity toward amateur drunks. Drinking and driving is reckless. Competitive drinking is idiotic. The people who engage in competitive drinking are usually bullies of one sort or another. They’re also easy targets for all manner of mayhem.

I avoid proximity to children at all times. Chimps and raccoons have more impulse control than the average American child, and probably better hygiene. That said, I respect and honor the sanctity of childhood itself, and I harbor an immeasurable seething hostility toward those who would desecrate the myths that children cherish. I consider those people what L. Ron Hubbard would term “fair game.” They’re in need of tutoring, perhaps a visit from the Karma Squad.

Gen. George S. Patton said, “Show me what a man is cynical about, and I’ll show you what he lacks.” People who are cynical about Christmas lack the intelligence to appreciate the positive influence of the holiday on people who generally behave like the selfish consumer biorobots that they really are. People who are cynical about Christmas don’t cherish the magic of a child’s belief. They lack any appreciation of the value of innocence. Anyone who derives joy from the public desecration of a sacred childhood myth deserves whatever happens. No mercy for the merciless.

Originally a one-off participatory performance event conceived and executed by a band of lunatic Surrealist artists in San Francisco in 1994, SantaCon has devolved into a hideous lurching vomiting human caterpillar, a roaming catalog of every negative aspect of alcohol made fully manifest. The participants have shown no compunction whatsoever about presenting this revolting spectacle in front of children innocently walking the street, children young enough to believe in Santa Claus, a fine pagan entity having no real relationship to any genocidal Semitic religion.

Do a web search for video of children on SantaCon. It’s horrifying. Seeing the look on the face of a child asked to “hold my beer” while Santa pukes into a trashcan is a bit like seeing a kitten with its leg caught in a mousetrap. The icing on the golden cupcake here is that the event looks entirely white. We must think of the children!

SantaCon is a parade of crime victims waiting to be taken. Just following them around and waiting for the moment, a decent street criminal could harvest a tidy profit at low risk. Putting LSD in someone’s drink is illegal, don’t do that. Bars can refuse to serve them. Smart ones already do. In my old neighborhood in Manhattan, if you’d pulled this crap on the Irish, it would’ve been, “You fuckin’ come up here mockin’ fuckin’ Santa Claus in front of our kids? You fuckin’ loser faggot asshole, we’re gonna kick your shit back to Jersey!”

Speaking as a white man, I’d grant carte blanche to any Person Of Color who feels the need to express their animosity toward white folk by engaging with SantaCon this year. It could be very therapeutic, a healing moment that could bring us all together.

This is a cause that could unite us all. Regardless of whether you voted for the malignant narcissist or the benign one, the psychopath or the sociopath, regardless of your race or gender, or your immigration status, we can all agree on this: SantaCon is an obscene travesty, an assault on childhood innocence, and a vicious insult to professional drunkards of every race, gender, and religion. SantaCon must be destroyed! Americans, UNITE!