A Flash of Young Pals in Denver

It wasn’t always a tight-knit group, but we worked hard and enjoyed each other’s company. What Year Is It (#225)? 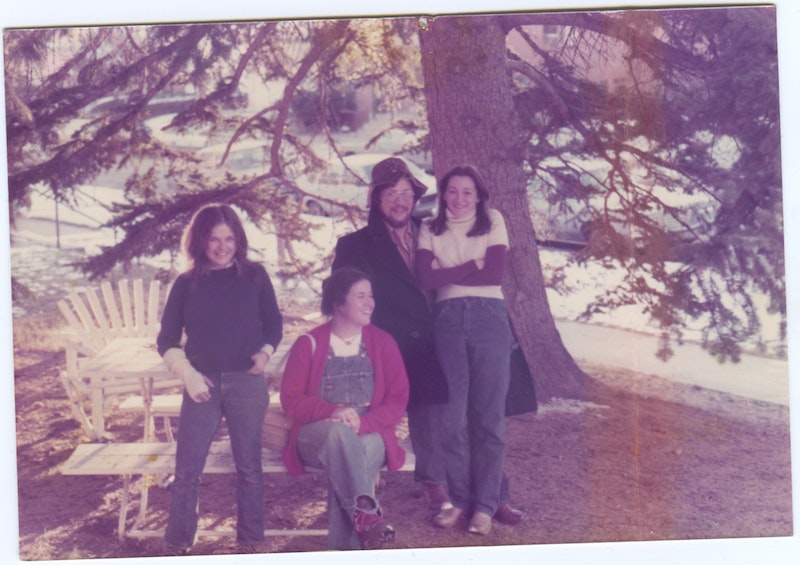 It was a mid-December snowy morning in Denver, and I’d gathered several colleagues from College Press Service on the front lawn of our Gilpin St. offices for a scrapbook photo. I’d taken a semester off from Johns Hopkins (to my mother’s chagrin, since that just wasn’t done in our family) to work at the five-person collective—a word you don’t hear often today—that sent out semi-weekly packets of news stories, brief blurbs and comics to approximately 500 subscribing college newspapers. I’d planned to spend a year in Denver, but felt I’d exhausted the “learning/teachable moments,”—there were many—and wanted to get back to Baltimore, finish my degree and get a jump on the fantasy of starting an “underground/alternative” weekly newspaper, tentatively titled The Baltimore Blast (the paper materialized; that name mercifully didn’t).

It was a scattershot group at CPS (and the local chapter of The National Lawyers Guild, whose office was also at 1764 Gilpin), a bunch of ostensibly liberal young adults from across the country thrown together to work 16-hour days during the week, and a few hours on weekends, not really to “Speak Truth to Power”—when did that phrase become popular and then really obnoxious?—but to synthesize the pulse, or zeitgeist, of the current, post-demonstration college campus. I never did figure out the “zeit” or “geist,” though gave it a fruitless go; instead it was a more settled time with no draft or buildings to occupy. I wrote two stories that were printed in over 350 college papers, one on Bob Dylan and the other about a student editor in California who was suspended by the school’s dean for green-lighting several obscenities in an otherwise unremarkable front-page story. I made over 35 calls for that particular dispatch—and my new friend Ned, the beleaguered editor, was reinstated—and that was practical experience.

I’ve no idea, decades later, what became of the four people in the picture here (taken days before I took my leave from Denver and went on a Greyhound curlicue that stretched from Denver to Montana and Wyoming, then Utah (awful because you couldn’t get beer for the bus at the rest stops), Reno and then Los Angeles, where I crashed for one night with Mary Ann (sitting), a real sweetheart who had family in L.A. and she took me on a tour of Mexican neighborhoods. Carol (top left) was a firecracker, who also had a two-year-old daughter, and she became sort of prominent in the Denver newspaper and political community. Steve was from Jersey, and though an irritatingly clunky writer (but eager for tutelage) was a really good egg and like me returned to the East Coast when his tour was up. He visited me in Baltimore once; I showed him what was left of The Block, and then bar-hopped in Fells Point. Helene was, if I recall correctly, a recent graduate of Vassar or Smith, and though she never flaunted it gave the impression, from tipsy comments at the dingy Satire Lounge, where we’d often convene after work, that she was from an affluent background. Helene was smart, and her duty aside from writing (we each doubled up; mine was running the Chief-15 printing press for the releases we sent out) was keeping the books, a necessary but thankless job that no one else wanted to do.

I was in tight quarters with these guys for five months, and if we weren’t really tight-knit, it was an intense period (everything’s intense at age, unless you’re glued to the tube or working for the government) that was a key component of my early career. I still chuckle remembering an October Sunday afternoon, when one of my brothers was visiting from New Mexico, and the two of us, hats in hand, asking Steve if we could buy the bottle of rye he kept stashed at his place, since we’d blown our cash at The Satire the night before. Steve was initially reluctant, but after a few minutes of schmooze that this guy from Jersey could appreciate, relented with good humor.

See if you can guess the year from these clues: The first commercial flight of Concorde goes from London to Bahrain; actor Sal Mineo’s murdered in West Hollywood at 37; Star Wars begins filming in Tunisia; Syria intervenes in the Lebanese Civil War; the CN Tower opens in Toronto; Family Feud debuts on ABC; Angola joins the United Nations; Laurence Olivier wins Best Supporting Actor, and “Silly Love Songs” is Billboard’s #1 for the year.