Santa Claus, Saint Nicholas, his origins, and his monuments. 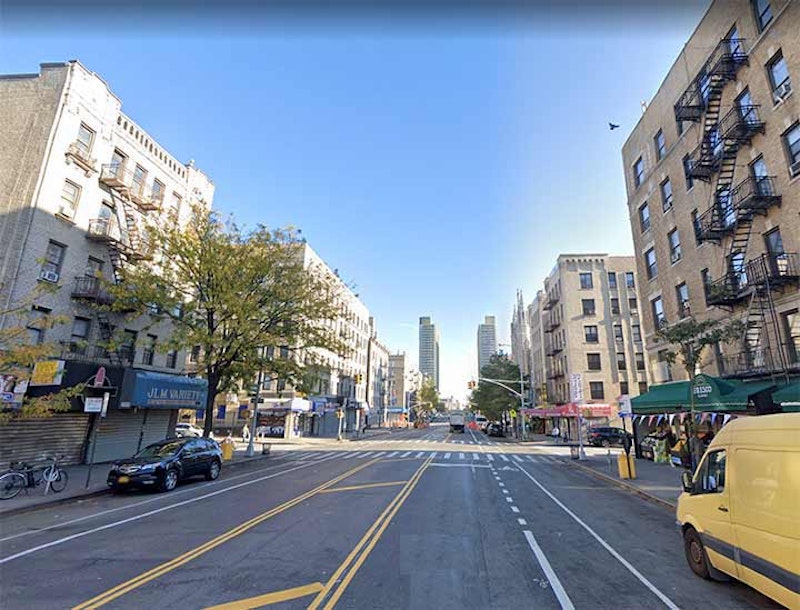 The legends abound about Santa Claus. Somehow, a 4th-century Greek bishop, Saint Nicholas of Myra, acquired the reputation of generosity that continued over the centuries until the Dutch built a further legend about him and contracted his name to “Sinterklaas,” and the British further adjusted this name and spelling to English pronunciation. The three mages from the Far East who visited Christ in the manger crystallized the legend. The tradition spread to the States.

Many think that Santa Claus walks the earth still; in the 1880s, Virginia O’Hanlon knew it and New York Sun editor Francis Church confirmed it. Santa Claus, however, has remained totally resistant to modern media as the centuries have passed. He has never appeared in the pages of Vanity Fair, or on the sets of Jimmy Kimmel, or on the internet domains of Facebook or Twitter. For Santa Claus, mystery is his greatest advantage, and it’s mysterious he chooses to remain.

While Santa Claus has repeatedly been purported to have been seen coming “right down Santa Claus Lane,” no street of that name exists within the five boroughs of New York City. However there are a scattering of streets around town that remind one of Christmas, the anniversary of Jesus Christ’s birth that inspired Santa Claus’ generosity.

Saint Nicholas, despite his Greek origins, is especially revered in northern Europe. He was the patron saint of New Amsterdam, the colony established by the Dutch in the 1620s, and the name of the first church established in the colony. St. Nicholas Ave., shown above, which zigs and zags around northern Manhattan from Central Park to Inwood, partially overlays an older road that was once a Native-American trail but later employed by colonists and named Kingsbridge Rd. as it led to the toll bridge spanning Spuyten Duyvil and now is honored by innumerable Bronx neighborhoods. The routes of St. Nicholas Ave. and W. 125th St. were also laid out in addition to the pre-existing older road, which became “St. Nicholas Avenue” in 1901 in the same spate of renaming that produced Columbus, Amsterdam and West End Aves., which had previously been 9th, 10th and 11th Aves. There are two other streets named for St. Nicholas in Manhattan: St. Nicholas Terrace, which runs along the west side of St. Nicholas Park, and St. Nicholas Pl., way uptown at W. 155th near where the Polo Grounds had been. 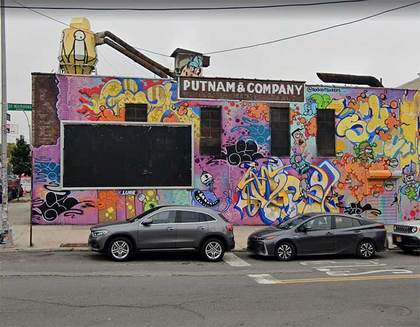 There’s a loose logic to the naming of the north-south avenues in Bushwick and Ridgewood that hark back to the Dutch colonial era. There’s St. Nicholas Ave. as well as Knickerbocker and Onderdonk Aves. (I’ve always said that old Dutch names are fun to say) as well as Irving Ave., which came along later on; it was named for Washington Irving, who wrote about Ichabod Crane and Rip Van Winkle, figures in Dutch Colonial New Amsterdam: originally Hamburg Ave., it was renamed because of anti-German sentiment during World War I.

Here, we see some of the “street art” that appears on the rubric “Bushwick Collective” that centers around the junction of St. Nicholas Ave. and Troutman St. In this case, the spray can Van Goghs have repainted the name of a previous business, Putnam & Company, though the copy beneath the first line has been allowed to continue to fade. 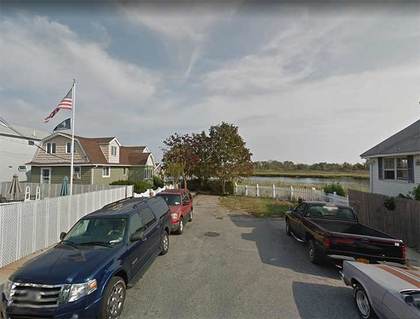 The word “noel” is derived from the French word for “birth,” ultimately from the Latin; English employs the root in the words “native” and even “natural.” It has over the centuries been employed to mean Christmas carols and by extrapolation, the holiday itself. Oddly, the word is two syllables in this context, and as a man’s name, just one. The feminine form keeps the two syllables.

In Brooklyn, Noel Ave. is way down there: it’s in the south end of Gerritsen Beach, the insular neighborhood tucked between Marine Park and Shell Bank Creek, the waterline pictured here. Here, Noel Ave. interrupts a set of streets named in alphabetical order, from Abbey Court, Beacon Court, through the M street, Madoc Ave. Noel Ave. appears between the F and G courts, Frank and Gain. Gerritsen Beach is neatly divided into two halves by a creek inlet, with only Gerritsen Ave. connecting them. 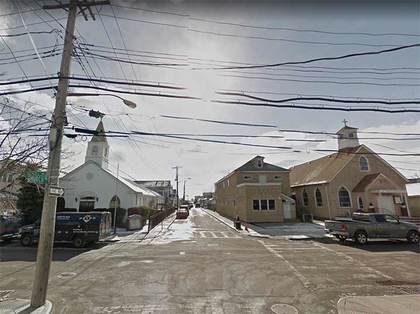 Broad Channel’s only two churches, St. Virgilius Roman Catholic and Christ Presbyterian are only a half block away from each other on Noel Rd. and Church Rd. (the latter is probably named for the Presbyterian Church). The Catholic church and school are modest buildings dating to 1924. The St. Virgilius convent, which appears similar to a regular residential building save for the presence of a cross above the front door, is a few blocks away at Noel and Lanark Rds. St. Virgilius merged with St. Camillus on the peninsula in 2008; when Christ Presbyterian was damaged by fire and storms, St. Virgilius welcomed its congregation.

The positioning of Noel Rd. is unusual, as it’s the only named east-west road in Broad Channel. The island has its own street numbering system independent from the rest of Queens (as does the Rockaway peninsula) with East and West roads from one through 22, divided into east and west sectors by Cross Bay Blvd. However Noel Rd. runs east and west between 7th and 8th Rds. How did this come about? That’s another mystery. 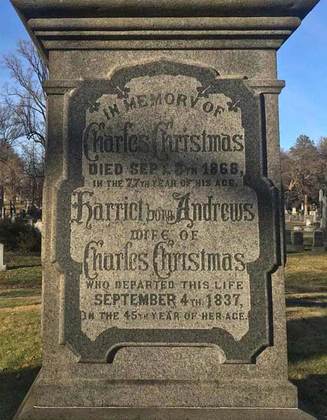