A Day at the Library: A Journal

The following journal is completely true. 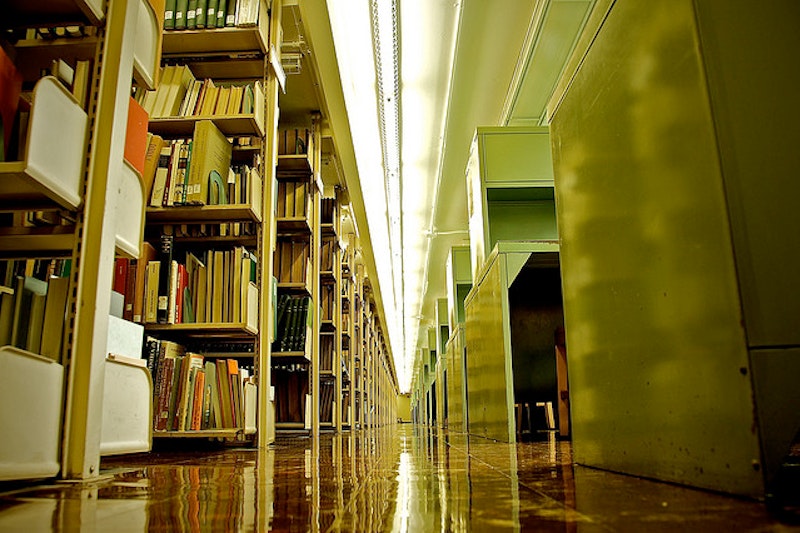 Well, true over the course of a few months, but true nonetheless.

10 a.m.: Open doors. Local tutor who fixates on my first name every time he addresses me stumbles in. Asks for books on five unrelated topics. None of them will be exactly what he’s looking for.

11 a.m.: We have a service bell prominently displayed on the front counter, but this doesn’t stop people from yelling “HELLO?” as we’re processing books in the back office. The bell has a strangely inverse effect on people: it will be unrelentingly rung by children while I’m standing there, and no one will ever touch it while I’m away from the desk. This psychological reversal might very well save the planet. Scientists should investigate further.

11:30 a.m.: Local derelict kid comes in with a root beer, despite the very obvious “NO FOOD OR DRINK” signs posted everywhere, ever since the Crush Incident of 1909. I leave him alone—at least it’s not his brother, the only human being stupid enough to watch “Two Girls One Cup” on a very open bank of library computers.

11:31 a.m.: I take that back. There are at least two human beings stupid enough, both sprung forth from the sagging loins of the same neckless mother.

11:45 a.m.: Story time breaks, and the influx of mothers on cell phones comes rushing down the stairs, their children in an undulating sea of sticky and crafts. Five minutes later, it looks like a unicorn exploded across the circulation desk. Thanks, tenacious glitter.

12:15 p.m.: Walter, a 70-year-old man with an unnerving penchant for baby talk comes in to show me a caterpillar he’s found outside. Asks me if I want to keep it. His feigned five-year-old innocent act screams “child toucher.”

12:34 p.m.: Someone has forgotten his e-mail password. This is entirely my fault. Obviously.

1 p.m.: Anonymous arrival of 20-odd boxes of donated books, most of which are growing colonies of toxic mushrooms. Human reluctance to throw out books is understandable, but the usefulness of damp, decrepit books at the local library is absolutely nil... unless these people are really into killing librarians with toxic spores—in which case, great job!

1:45 p.m.: Angry patron declares that female employee has a “hard-on” for her because of her astronomical (but completely justified) late fees. Also claims that she has a serious illness that prevents her from returning books on time. Also claims that she is an “artist” which means that, “she exists to break the rules.”

2 p.m.: Director saunters in. By 2:05, we hear a crash and a curse emit from her office, which looks like a particularly alarming episode of Hoarders. Waiting for the dead cat limb to flop out of the door so we can finally call the local health department.

2:12 p.m.: Resign myself to the position of a glorified video store clerk for the remainder of the afternoon. Why take out books when multiple copies of Wedding Crashers and Last Holiday are available? Oh, Queen Latifah, what mischief will you get into next? Will you finally find love? Or dignity?

2:45 p.m.: Local magazine editor comes in and complains about the wireless network not working. Asks when it’ll be fixed. Asks again. Asks more insistently. Asks again. Changes setting on his computer. Wireless suddenly works. Glares at anyone who dares to breathe too loudly.

3:35 p.m.: Woman arrives at library panting and with a beet-red face. We call 911 and the volunteer ambulance corps arrives. Woman states that she’s just taken a pollen pill. I mean, a known, severe allergy to pollen shouldn’t really be related to this, right? Right? Thanks for bringing it here, dummy.

5 p.m.: Someone decides to defecate up the wall in the public bathroom. The sheer power that has been demonstrated is nearly admirable. Find out how to harness this force, re-purpose it towards saving the oceans.

5:30 p.m.: I slip out the side door before the director regales me with another fascinating story about her myriad of secret rashes. These stories typically begin with, “I don’t want to be gross, but...” I say that if you want something, take it. Especially if it involves me not hearing about incurable open sore #35.