How do you react when a star player of an opposing team is injured? 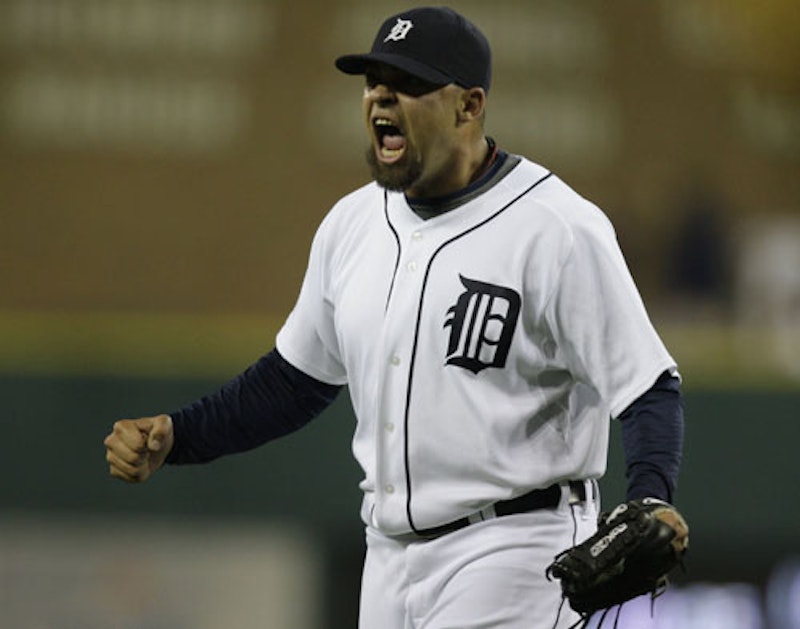 I missed the Tigers/Twins game last night, but this morning it was impossible to escape the brutal video of Detroit’s explosive reliever Joel Zumaya clutching his right elbow after chucking a 99 miles per hour fastball to Delmon Young in the eighth inning. Zumaya’s fate is as yet unknown, but it’s certainly possible that the injury-plagued pitcher could miss the rest of the season. Which brings up a topic that’s touchy among baseball fans: when a player from a team that’s battling yours for a division title gets knocked out of action, there are two reactions. One is of at least feigned sorrow, with platitudes that it’s awful for the injured individual and the game of baseball itself. The other, and more honest I believe, is a momentary feeling of shock, that’s followed by an unsentimental calculation that your team now has a better chance of going all the way to the World Series. I’m in the latter camp.

There are caveats: only the most misanthropic individual would find pleasure when a player is beaned (like when Roger Clemens took out Mike Piazza in 2000, with no apparent remorse), suffers a concussion or career-ending injury. But as a Red Sox fan, if the Yanks’ Robinson Cano twisted his ankle tonight and had to sit on the DL for two months, I would not be unhappy. And if Mariano Rivera suddenly developed a dead arm, resulting in a skein of gopher balls and an ERA that bolted up to 4.54? Delightful.

Every team suffers a number of injuries each season, and on occasion it seems that half a club’s squad is hunkered down in sick bay. It’s part of the game. This year, it’s Boston’s turn: last weekend in San Francisco, 2008 MVP Dustin Pedroia (the unofficial leader of the Sox) busted his foot and will miss at least six weeks; burgeoning ace Clay Buchholz, unaccustomed to running the bases, somehow messed up his leg and he’ll skip at least one start; and catcher Victor Martinez is heading to the DL after fracturing a bone in his thumb. Meanwhile, the Sox have been without Jacoby Ellsbury, who stole 70 bags last year, for all but 11 games this season after a collision with teammate Adrian Beltre. (Ellsbury’s timetable for a return is uncertain, leading many in the Boston media to question his desire, but that’s a sore subject for another day. Short version: Ellsbury, not coincidentally represented by agent Scott Boras, was critical of the Red Sox medical team, blabbing to reporters, which is usually a one-way ticket out of Boston given GM Theo Epstein’s elephant’s memory.)

I can’t usually follow the meathead comments that appear online reacting to a sports story, but last weekend several Yankee fans chimed in on the message boards after the Pedroia injury, with mock sorrow, and predictably drew self-righteous and venomous responses from the Sox faithful. That sort of hypocrisy is hard to swallow: sure, the Sox have had some bad luck, but there’s no use whining about it.

I was at Camden Yards last Sunday watching the Washington Nationals blow another game to the Orioles with their unfathomably awful defense, and spoke with a buddy about this question. He’s a class-A Phillies fan, and I asked him if he’d be sorry if, say, the Atlanta Braves’ young star Tommy Hanson pulled a hamstring, and had to miss a month or two, including a few starts against the rival Phils. His reply: “Tommy Hanson? Sure, I’d take that, but I’d rather David Wright (of the suddenly competitive Mets) missed the rest of the season.”

It’s sacrilegious, I guess, or perhaps just bad taste—not unlike, God forbid, suggesting that Ken Griffey Jr. used PEDs during his career—but I think that’s the instinctual nature of a baseball fan. Mind you, this only applies to division rivals, so, since Zumaya is in the A.L. Central, and no immediate threat to Boston (unless they get in a Wild Card chase later this summer), I wish the young pitcher all the best and hope his injury is less severe than it appears.