These Birds are Cooked

The Baltimore Orioles, despite their touted "young talent" are destined for A.L. East's cellar for years to come. 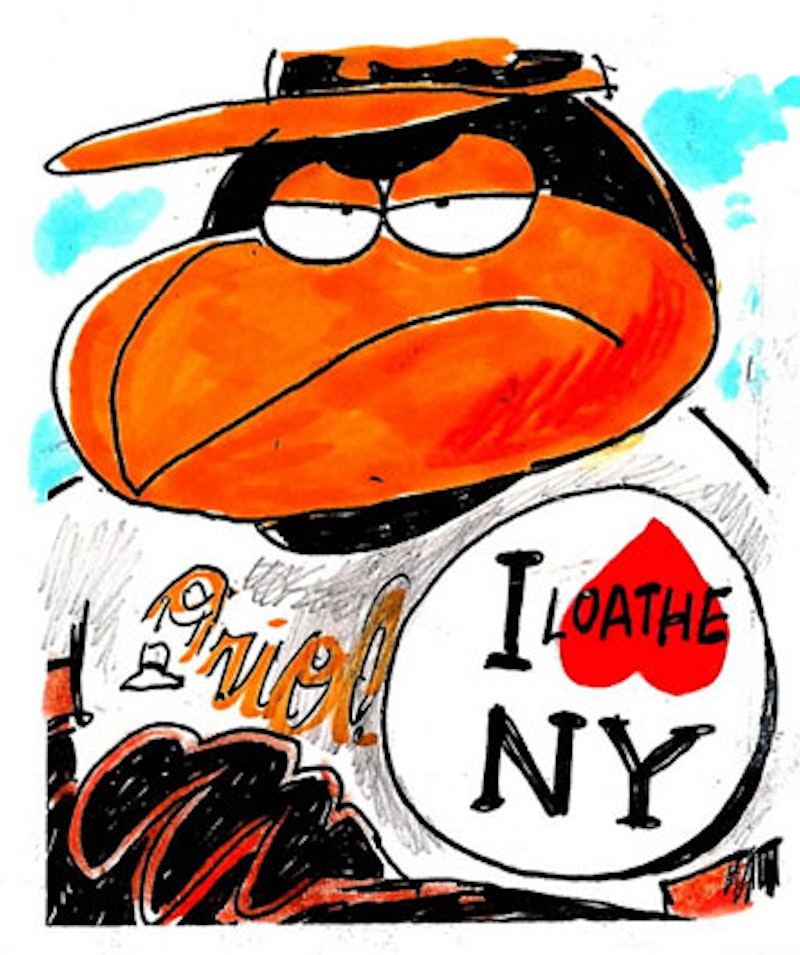 The Baltimore Orioles have had such a horrid run since 1997 that it’s not surprising that the occasional out-of-town sportswriter will churn out a story that suggests, all evidence to the contrary, that the O’s do indeed have a bright future. It’s a swell fairy tale, one that I’ve fallen prey to previously, as recently as last summer, but the stark reality is that Baltimore’s baseball fans have as much reason for optimism as their counterparts in Pittsburgh and Kansas City. Maybe less, considering the team is still owned by Peter Angelos. (If only Cal Ripken Jr. could head a consortium to buy the Birds, the clucking on message boards says, then the O’s would be in business! Truth be told, I couldn’t agree more.)

The Yankees just completed a three-game shellacking of the O’s at Camden Yards—scores were 5-1, 9-6 and 10-2—and while the Team That Jeter Built (the Yanks veteran, at 35, is having a terrific season, and, by my reckoning, is a lock for the American League MVP, more for “lifetime achievement” than actual performance, as the Twins’ Joe Mauer deserves the award) unfortunately appears to be riding a wave that will lead to a November parade on Broadway after winning the World Series, Baltimore’s woes are far deeper than just dropping their last three games.

On Tuesday, New York Times beat reporter Tyler Kepner, published a story headlined “Yet Another Year Pains the Orioles, but This Time There is Hope,” that I’m pretty sure was sincere. But Kepner, a fine baseball writer, just doesn’t follow the team enough to see that the cornerstone of O’s optimism—the young pitchers Brad Bergesen, Chris Tillman and Brian Matusz, along with the superb right fielder Nick Markakis—isn’t nearly enough to get the team to .500 next year or even in 2011. Bergesen, for example, was impressive this season (until he went down with an injury) and for my money, the best of the lot. Nonetheless, even when he took the mound, maybe leaving after giving up three runs in six innings, the O’s bullpen is so atrocious that you can never put a “W” on the scorecard until the final inning is completed.

Baltimore Sun sportswriter and blogger Peter Schmuck is more realistic, joking that even he, once the Ravens’ season gets going, will be an infrequent visitor to Camden Yards. Schmuck also made the blunt observation that O’s manager Dave Trembley won’t be around to see his prized youngsters progress (or, as in the past, probably not). Reacting to the team’s president of baseball operations Andy MacPhail’s decision to shut down Tillman and Matusz for the rest of the season, Schmuck wrote on Sept. 2: “The only real question is what this means for Dave Trembley, whose future as manager was supposed to depend—in large part—on whether the young Orioles showed noticeable improvement over the final two months of the season. If that is still the barometer for his job security, then Trembley is a dead manager walking, and MacPhail has paved his road out of town with a series of decisions that have made it next to impossible for the club to avoid another end-of-season collapse.”

My only quibble with Schmuck’s analysis is that the (annual) collapse began after the All-Star break. (At least Schmuck, one of the few Sun sports survivors after a mass purge by parent company Tribune several months ago, hasn’t lost his sense of humor, either about his newspaper or the baseball team he covers. In his blog on Sept. 2, he quipped, “In case you missed it, or all the copies of today’s print edition are sold out in your area, I’ve got a column up today…”)

Trembley, I’m betting, gets canned a day or two after the season ends. On the one hand, I feel bad for the guy, who toiled in the minor league sewers for some 20 years before getting tapped for the O’s job in ‘07; on the other, he’s a humorless fellow who is simply lost when it comes to making strategic pitching decisions. Trembley told Kepner that there’s a “sense of pr ide” emanating from his squad’s clubhouse, which is pretty weird since the O’s are going to finish last (again) in their division and probably lose 95 games.

I go to a lot of games at Camden Yards (even though I’m a Red Sox fan, which has its own drawbacks this year, the O’s park is still a great place to see baseball, and it’s affordable and not far from my house), and it’s difficult to see that “pride” on the field. Last Sunday afternoon, for example, even in a 5-2 victory over the Indians, most of the team seemed lethargic and going through the motions. When Adam Jones (now injured and probably out for the season), by all rights a five-tool player, took a half-hearted route on a ball hit to dead-center, and muffed it, my wife—an O’s fan who has a Jones t-shirt—stood up and screamed, “You’re a disgrace, Adam Jones!” it caused one of our sons and me to take notice of this uncharacteristic vehemence. Veteran Melvin Mora’s done with the team after this year, but he loafs as well, as does—and sorry for the heresy, O’s diehards—Brian Roberts, who was foolishly signed to an extension through 2013, even though he’s 31 and has previously expressed ambivalence about playing for a perennial loser.

Finally, and although this is apropos of nothing more than the general lack of cultural interest among baseball players, when one of those dumb in-between quizzes was flashed on the Jumbotron that Sunday, I just shook my head in disbelief. Nine Orioles players were asked what singer they preferred, Neil Young or Neil Diamond, who are roughly the same age and were performing before the athletes were born. Six of the nine chose the unspeakable Diamond over Young, which would be the rough equivalent of six Orioles in ’69 picking Lawrence Welk over Bob Dylan.

Jim Johnson may not have a future as the Orioles’ closer, but at least, unlike rookie sensation (still a work in progress as a catcher) Matt Wieters, he apparently prefers “Keep on Rocking in the Free World” to “You Don’t Bring Me Flowers.” As does Brad Bergesen, which leads me to believe, without any baseball horse sense whatsoever, that he’ll be a star. And then leave for a contending team as soon as he can.