The Football Scandal That Isn't

The Michigan practice time scandal isn't a big deal. What is a big deal is how the media messed up. 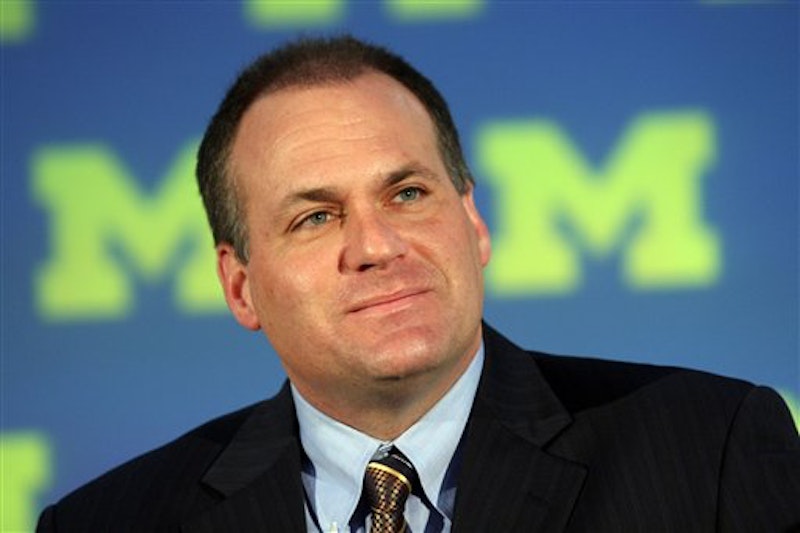 Things have not been well in the land of Michigan football. Last year's 3-9 season and a few off-season transfers have left Michigan fans uneasy. Then, over last weekend, came Armageddon. According to a report in The Detroit Free Press, Michigan had violated several NCAA rules regarding the amount of time players were forced to practice. After decades of a clean program, it had apparently taken second-year head coach Rich Rodriguez barely more than a year to flush everything down the toilet. We fans, unfortunately given to holier-than-thou posturing from time to time, were tarred, scarred, and all looked foolish. I saw the report scroll across at the ESPN's onscreen ticker and sent out incoherent, expletive-laden text messages. I received equally angry, confused responses.

As I began sifting through the story online, I was surprised by what I found. Instead of self-righteous columnist anger and end-of-the-world predictions, I was met with relief. Apparently every program—in all sports at almost all schools, not just the moneymaking football and basketball—does what our football team did. Michigan has an entire staff devoted to making sure we abide by the rules. It isn't even clear that we violated anything.

In place of an argument between pro- and anti-Rodriguez camps, which is what I expected when I first heard the news, normally disparate Michigan fans have really come together behind Rodriguez (for a great discussion of this, check out this post). Many fans, especially those under the age of 40, have united against what is emerging as the perceived enemy: The Detroit Free Press.

This story has become a classic showdown between the mainstream sports media and the blogs and social networking sites that make up the new media. And, frankly, it looks like mainstream media is losing the battle. For instance, take a look at the Free Press' coverage of new media response to their coverage of the "scandal." If newspapers want to figure out why they're losing market share to blogs, they need to look no further than the story above. Instead of embracing new media, the web editor of the paper takes bizarre, condescending shots at the mediums. When discussing PetitionSpot.com, the writer made the inexplicable decision to include the following sentence: "Other popular petitions on the site include one to bring back NBC's Chuck for a third season (41,058 signatures) and another trying to get comedian Kathy Griffin's new book selected by Oprah Winfrey for her book club (36,743 signatures)."

On top of that, there seems to be a complete absence of any understanding of journalistic ethics on the Internet. You will notice the correction (incorrectly and misleadingly marked as an "Update") at the bottom of the page without any context explaining the "update." If you look at MGoBlog.com's discussion of the article, you can see what was deleted from the online record without mention: "Most of the posts are written by someone who identifies himself as Brian. No contact information is given." Even the most cursory glance at the website will find that contact information is readily available, as is a short autobiography of blogger Brian Cook. This is an egregious error in a paragraph that is nothing more than a pot shot at a blog that happens to be criticizing your publication's story.

The laziness in online coverage can also be found in the curious decision to use Facebook as the only method of interviewing the founder of the anti-Free Press Facebook group. If the group founder refused other methods of interview, that's fine and should be noted, but the story reads as if the author only tried Facebook. As a result, the quote appears in informal Internet style, making the founder look less than professionally literate.

Aside from the bizarre us-vs.-them tactic taken by the Free Press against the new media response, the coverage of the scandal itself has been ripe with ethical questions. Jonathan Chait, an editor at The New Republic, wrote a column lambasting the Free Press editors for allowing an opinion columnist—one who has constantly criticized Rodriguez, at that—to become one of the primary reporters on the story. This is a greater crisis in sports media where the lines between opinion columnist and "hard news" reporter are much blurrier than in traditional news.

The response to the scandal, though, has showed a real chink in the constricting style of mainstream sports media. The entire issue at stake in the Michigan hullabaloo is the definition of "voluntary workout." This is an extremely contextual issue, and the nuances seem completely absent from mainstream coverage. If you look at ESPN.com's initial story about the scandal it fails to frame the accusations with anything near the depth of its own blogger writing simultaneously. In the post, the blogger is able to explain that these practices occur at all programs and are not necessarily violations. Why then, is this extremely pertinent information not in the mainstream ESPN story or in the initial Free Press story?

The Internet's response has been clear and devastating. There are details about the story that have still not been explained, such as why there was no comparison to other programs, why freshmen players quoted have responded so angrily, and why certain sources were kept anonymous. Mainstream media, especially the sports media, need to remove this layer of opacity and add a layer of accountability. Instead of mocking the criticisms and publishing self-congratulatory articles, the Free Press should respond to the questions being asked. They wrote their own story about Michigan fans rallying behind the coaches. Maybe they need to look at themselves and ask why.