The Story of Two Bigfoot Columnists

On the conservative side, it’s all sports; as for the liberal, recriminations against the American people for being stupid. 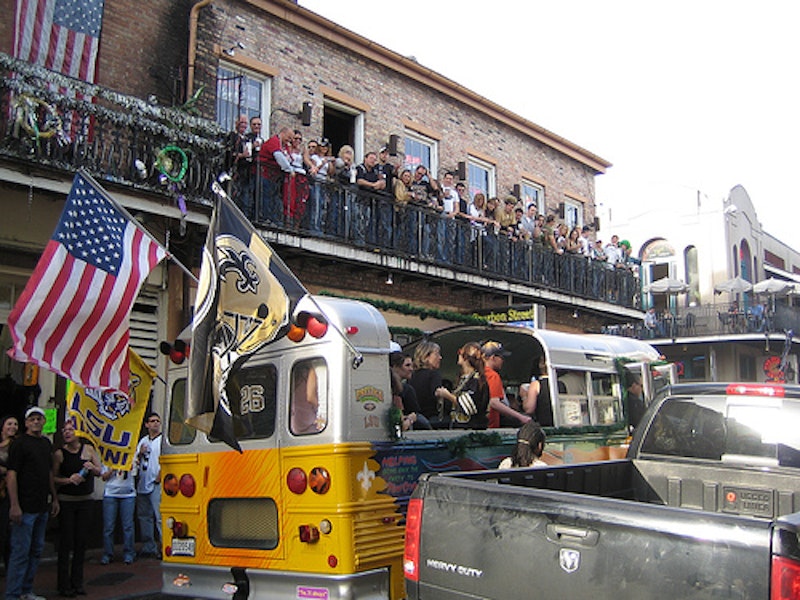 Two op-ed columns captured my interest this past weekend, one a whimsical toss-off leading up to the Super Bowl, the other an earnest and odious defenestration of the American population at large. The writers, The Wall Street Journal’s Daniel Henninger and Slate’s Jacob Weisberg, have little in common politically (and probably culturally as well), but both took the opportunity to muse about the citizens of the United States and what does, and doesn’t, make them tick.

I’m a little grumpy myself at this point, but that’s mostly because of the blizzard that’s paralyzed Baltimore—the local television weathercasters were anything but grumpy, since this two-foot plus storm was their equivalent of an impossibly tight presidential race on Election Day—and left wreckage in our front and back yards, with one particularly menacing broken tree branch falling atop the station wagon. As a youth on Long Island, winter storms were an opportunity to make a lot of dough, shoveling the driveways of older neighbors; on Saturday, I took to the task once again, until the daggers of pain shooting from my lower back forced me to turn over the job to the kids.

Nevertheless, as the city remains at a standstill, I’m attempting to clap my verging-on-arthritic hands (owing, in large part, I’m convinced, to the impossibly tight keyboard of my Blackberry), remembering the old Boy Scout standby, “If You’re Happy and You Know It,” and thinking about Henninger’s contention that “Most people would rather be a happy sports fan than anything else. This is irrefutable.” His hyperbole is obvious, of course—excepting those slightly deranged men who attend baseball games in the summertime, shirtless with their team’s colors or logo painted on their chests or beer guts—since while sports is, at least to millions of us, a delightful diversion from the sometimes hard realities of daily life, the pleasure of your team’s success is fleeting. Henninger didn’t let on to readers what team he rooted for in the Super Bowl, but it was clear he planned to park himself in front of the tube for the game, and imagined that perhaps all nine Supreme Court Justices would as well.

My own scattershot feeling on that score, probably because following football, as opposed to the six-month MLB season is that any neutral observer (leaving aside Colts partisans) who didn’t favor the underdog Saints probably kicks cats and dogs for a hobby. After all, while New Orleans has, at least in some respects, recovered from Katrina (and I’ve no compunction in reminding readers that President Bush’s inept response to that disaster was a far bigger factor in his second-term unpopularity than the Iraq War) who wasn’t pleased on Sunday night that the beleaguered city had something monumental to cheer about?

And a winning sports franchise is monumental: years ago, here in Baltimore when the Orioles were among MLB’s elite teams, you’d hear the common refrain all over town, from people of wildly divergent backgrounds, “How About Them O’s!” Today, as the still-beloved Birds are in the midst of an 12-year skein of losing seasons and attendance at their now-iconic Camden Yards slipped to an all-time low in 2009, the city is worse off, both spiritually and fiscally (less spectators, less business for the surrounding bars, hoteliers and retailers) and the team’s resurgence would at least lift the mood of residents. That may seem hard to believe, but when the Ravens took a backdoor route to the NFL playoffs not long ago, and knocked off the New England Patriots, Baltimore was awash in purple Ravens paraphernalia and everyone from the Dunkin’ Donuts cashier to high-priced lawyers were talking about the team.

But there is a limit, for while taking an active (even obsessive) interest in the fortunes of the team you follow, the jubilation after a championship or down-in-the-dumps grumbling in the event of a lost season, is short-lived. In the fall of 2008, the Boston Red Sox (my intense diversion for more than 45 years) were competing for the American League pennant against the upstart Tampa Bay Rays, which would normally occasion nail-biting and cheers and groans after each at-bat. Yet, I barely noticed (the Sox lost the deciding seventh game), since the country’s economy was in tatters and Boston missing the World Series was of little consequence. That’s an extreme example, but you get the drift: once a game is completed, it’s only a brief period of time before a fan moves on. This isn’t lost on Dan Henninger, of course; he was just having a lark with this column, in all likelihood a welcome respite from writing about the country’s chaotic and currently dysfunctional government.

Not so for Jacob Weisberg, however. I don’t mean to stalk the Slate Group’s editor-in-chief in print, but his bitter gibberish about the at least temporary fall of Obama is so nonsensical it’s hard to resist. As I’ve written before, Weisberg last November prematurely laid out the accomplishments of the first-term president, including health care, but now the “narrative” (when that word disappears from the vocabulary of political journalists I’ll be an extraordinarily happy man) has flipped upside down, the left-leaning pundit has taken to blaming us—American voters; you and me and a dog named Boo—for Washington’s stalemate.

Weisberg’s Feb. 6 column, headlined “Down With the People,” might appear to be, like Henninger’s op-ed, a frothy romp, but anyone familiar with the increasingly intractable Weisberg knows that he’s averse to parody. He concedes the idea Obama has made “tactical mistakes” as “plausible,” and doesn’t miss another opportunity to slam “obstinate” Republicans, but concludes that Americans are basically out to lunch. He writes, “[This] neglects what may be the biggest culprit in our current predicament: the childishness, ignorance, and growing incoherence of the public at large.” He zeroes in on contradictory polling results, citing that at different times people liked Obama’s stimulus plan, then didn’t; desired more regulation on financial institutions, then didn’t; and want a balanced federal budget, but not at the expense of entitlements.

Yes, this can be strange (and more pronounced today since different polls are released nearly every day, usually worded to suit the pollster’s own political leanings), but fickle opinion among voters wasn’t invented when Obama took office. And, unlike Weisberg, who makes his living following the business and pratfalls of government, for a majority of Americans, politics (aside from the two weeks preceding an election) isn’t a high priority. Most people, otherwise engaged in their own jobs, figure that elected officials, at least theoretically, have the country’s best interests at heart, and are in D.C. or their state’s capital to represent them.

What really has Weisberg’s goat—and a similar, if less offensive, strain of condescension can be found among his liberal colleagues—is that Obama’s first year in office hasn’t changed the Beltway culture much at all, and the President is no longer seen as transformational (like Lincoln, the two Roosevelts or Reagan) but rather as an intelligent and charismatic man who really is inexperienced. This was not in the narrative! I happen to believe that Obama, once the Democrats take a deserved shellacking in November, will buck up, ditch some of his hack advisers from previous administrations, and probably win reelection in 2012.

But it’s a gross insult not only to Weisberg’s readers, but citizens across the country, to blame the public—who, according to the Slate sage, “live in Candyland”—that Obama’s health care reform has not become law. Maybe it hasn’t occurred to Weisberg that what, a year ago, seemed like a very reasonable and necessary issue, is now in the sewer because of sweetheart deals to entice reluctant Democratic senators; bills that are longer than a William Vollmann novel and probably unread by a majority of those voting on them; a Republican party bent on revenge; and a mass media that covers politics as if every day was the Super Bowl.