We need to stop letting third parties control the difficult conversations of our time. 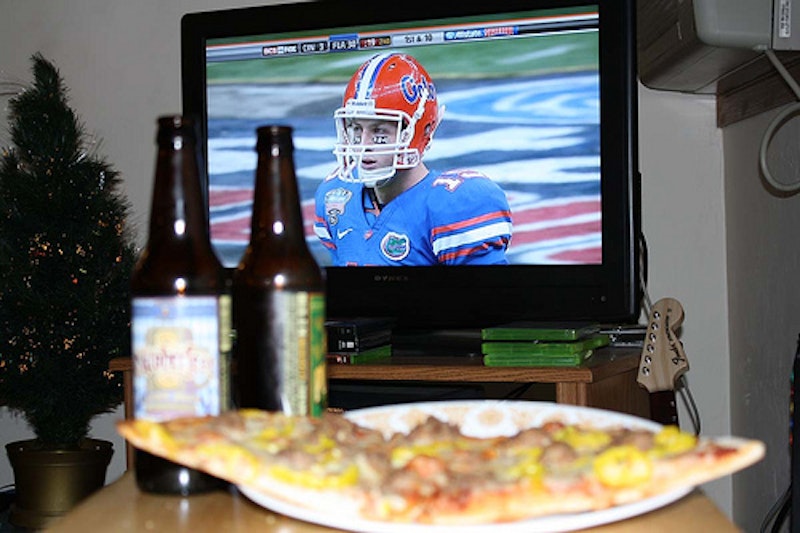 Once again, powerful, entrenched forces for cultural and political conservatism have done what they’ve developed as an art over the last three decades, but especially since 9/11. They set up a straw man—in this case Tim Tebow, an earnest and gifted college University of Florida football player who has been photographed during games with “John” painted under one eye, “3:16” under the other. Then, they allow him to turn the cultural conversation about a hot-button issue—abortion in this case, but you can substitute deregulated capitalism, campaign finance, security, and most recently health insurance reform and the national debt—into an emotionally charged rhetorical blind alley. By positioning Tebow and his mother, as Sarah Palin and others before them have, to occupy national attention instead of a meaningful debate about important issues—by focusing the conversation on a Super Bowl commercial of all things—cultural conservatives succeed in controlling issues as they never will through conventional democratic means. Like, say, elections. You can tell Senator Scott Brown I said so.

That said it’s important not to give reactionary conservatism more credit than is due. I find it more insulting that the mainstream media has become their handmaiden, kow-towing to what has only ever been the loudest of minorities in pursuit of a misled ideal of “balance.” Bush, Rove & co. were just plain better at running election campaigns than their Democratic opponents—and have succeeded, as President Obama has noted recently, in shifting our political dialogue into a grandstanding “every day is Election Day” mode. Analogously, culturally conservative organizations like Focus on the Family are remarkably adept at controlling media coverage in the manner outlined above. The story about the Tebow Super Bowl spot has been covered as if that’s all there is to it—one man, whose gestation was not terminated by his mother, makes a highly emotive commercial. Should he and his mother have done it? wonder some in the media. Is the ad rife with inaccuracies? wonder others. They report the story as if Tebow approached Focus on the Family out of the earnestness of his belief. Actually, as Jim Daly, the CEO of Focus on the Family, clucked on Tuesday’s Larry King Live, Tebow was cherry-picked by the organization for a bunker buster of an ad. Mission Accomplished.

The first 20 seconds of the one-minute video are a rhetorical fumble. The logic runs: “We are talented former athletes, presumably the best Planned Parenthood could get on short notice. We’re all about sports and family, and since the word ‘abortion’ is conspicuously absent from the script, that’s our response to the Tebow ad.” Talk about contorting sense in a desperate attempt to fight back. The video improves as it goes along, focusing on empowered mothers and daughters’ ability to take care of their own reproductive decisions. Even still, it’s as insipid a response as the pallid white background the athletes stand against. James and Joyner rehash the standard-issue “right to choose” talking points, but the fact remains that this is a YouTube video, not a Super Bowl ad with all the cultural capital that entails. Goliath wins game-set-match, and while the mainstream media reduces the story to a slug-out between Focus on the Family and Planned Parenthood, nothing productive can possibly come from its coverage.

Most media have perpetuated the illusion that this story is about Tim and Pam Tebow, instead of an issue-driven story that should concentrate reporting on Focus on Family’s deep pockets, questionably close connections to CBS and other mainstream media outlets (a story The Daily Beast took up on Tuesday), and the organization’s cynical, frequently bigoted cultural agenda.

James Dobson’s assertion that homosexuals will “destroy the Earth” is only one of the outlandish anti-gay statements made in the name of Focus on the Family (http://sportsbybrooks.com/tebow-fronts-group-known-for-anti-gay-agenda-27656). So far, the reporting I’ve read has failed to understand that the Tebows are patsies. They are emotional lightning rods perfectly positioned to keep this moment from becoming an opportunity for a serious discussion about reproductive rights. Of course Tebow has the right to his views, even to air them on national television—no reasonable person would question that, and no reasonable media outlet would waste time discussing it.

But as long as these diversions make for emotionally engaging television, and those emotions are kept at a fever pitch, Focus on the Family has control of the story and the debate. Only a matter of degree separates the Tebow ad from the horrifying, not to mention patently fabricated, videos that Rock for Life once distributed of fetuses screaming as they were terminated. In order to have a serious national conversation about abortion and reproductive rights, we must leave behind the issues’ heavy emotional baggage and approach them calmly and rationally. This involves thinking about the issues more deeply than hurling unproductive epithets like “anti-choice” or “pro-death,” reconsidering the assumption that all those on one side are religious bigots (my ire is directed at Dobson and his organization, not all those who are “pro-life”), and ending emotive mud-slinging that too frequently relies on outright fabrication of facts.

Only then can people on all sides wrest control of the conversation from deeply entrenched special interest groups like Focus on the Family and, yes, the mainstream media. Only when we stop letting these organizations have the conversation for us by proxy, and really examine our beliefs for ourselves, can we start rationally discussing reproductive rights.