Slate’s Jacob Weisberg shoos off the President’s critics and unconvincingly clings to the Obama/FDR mantra. 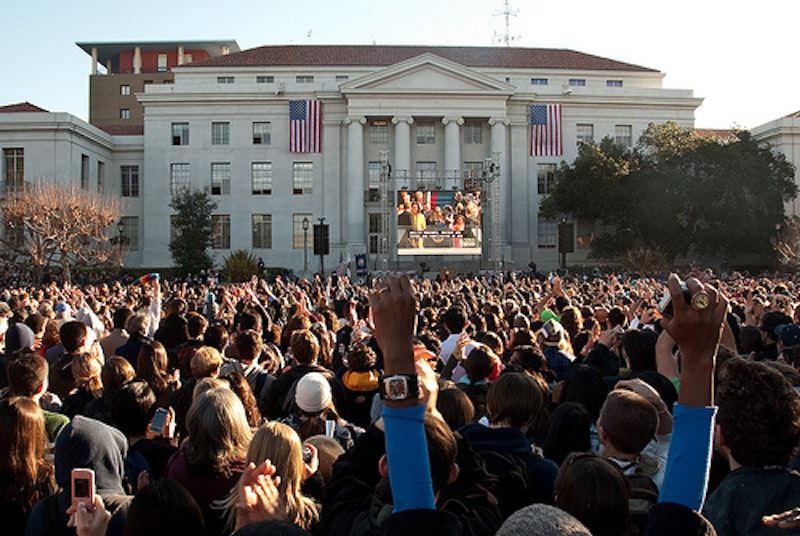 At first I thought it was a prank.

It was the Saturday after Thanksgiving, a dead day online (and off, if anyone’s still keeping score), even for the popular website Slate, and so when I began reading Jacob Weisberg’s “Obama’s Brilliant First Year”, in which he claimed that Barack Obama will be canonized by future historians for accomplishing more in his first year than any president since Franklin Roosevelt, the first thought was how many readers might be hoodwinked by Weisberg’s slice of holiday mirth.

Granted, Weisberg isn’t given to humor (unless you thought his collection of “Bushisms” was material that caused Denis Leary envy-borne panic attacks), as the pretentious title of his occasional column, “The Big Idea,” amply demonstrates. Still. The notion that Obama is remotely in the same league as the hyperactive FDR of 1933 is so ludicrous that only the most insulated partisan, someone for whom the President’s triumphant election last year remains a sparkler that won’t ever be extinguished, would fall for it. And I guess Weisberg falls into that category, since after completing his Big Idea, it’s clear he’s, in The Washington Post’s Dana Milbank’s words, “[a] parishioner in the Church of Obama,” who hasn’t yet discovered that his “spiritual leader is a false prophet.”

Weisberg, the 45-year-old editor-in-chief of the Slate Group (owned by The Washington Post), assumes the posture of an objective observer in evaluating Obama’s first year. Perhaps it’s an attempt to appear statesman-like, crafting the start of his own legacy, but I think it’s fairly dishonest, considering Weisberg’s the author of The Bush Tragedy and throughout his journalistic career—he first gained notoriety while at The New Republic for his admirable rabble-rousing about the book industry—he’s been a staunch advocate of Democratic politicians. He writes: “This isn’t an ideological point or one that depends on agreement with his policies. It’s a neutral assessment of his emerging record—how many big, transformative things Obama is likely to have made happen in his first 12 months in office.”

It’s hardly a “neutral assessment,” even as he bats down the “sarcasm brigade” and disillusioned journalists, which, leaving aside obvious conservative opponents, includes Obama supporters such as Jon Stewart, Milbank, New York’s John Heilemann (who recently offered the President advice on how to “reclaim his lost mojo”), Frank Rich, Paul Krugman and Garry Wills. The latter, in a brief New York Review of Books piece, argued that Obama would attain his place in history by withdrawing completely from Afghanistan, even if meant losing a second term. After last week’s inconclusive speech about deploying 30,000 more American troops to rout the Taliban, albeit with a fuzzy timetable for success, it’s reasonable to guess that Wills is now in despair.

Number One on Weisberg’s list of Obama’s accomplishments is, not surprisingly, the healthcare bill currently being whipsawed about in Congress. Weisberg says that its passage is “increasingly likely”—maybe, maybe not—and it doesn’t matter if the legislation is flawed and doesn’t meet the standard set by liberals, since the innumerable imperfections can be “improved” later. He ticks off the oft-repeated mantra of Democratic presidents who have failed to provide this new “transformation of the American social contract,” and says this alone might qualify him as the “most consequential domestic president since LBJ.”

But Weisberg’s calculation is as full of holes as the current legislation before Congress. How, for example, will a watered-down healthcare bill be “improved” if, as political analysts like Charlie Cook and Stu Rothenberg predict—joined by Democratic leaders in moments of candor—the Republicans make gains in next year’s midterm elections, especially in the House? It’s more likely, should the GOP reclaim a substantial number of seats, that the healthcare provisions will be picked apart even further, especially since most of them won’t go into effect until 2013.

I’m not a purveyor of “big ideas” like Weisberg, but from this quarter it appears that Americans have one overriding issue on their minds: the still sputtering economy. If you’re currently unemployed, or fearing a pink-slip, the future benefits of “improved” healthcare take a back seat to making financial ends meet. Yes, a healthcare “victory” will cause a temporary spurt of hallelujahs and Obama bumps from liberals (those who aren’t too pissed off about the inevitable lack of a public option and abortion coverage) and the mainstream media, but the White House shouldn’t expect much congratulation from those in the middle of the political spectrum who have a “If it ain’t broke, don’t fix it” view on healthcare.

Weisberg also praises Obama for the nearly $800 billion economic stimulus that was passed shortly after he took office. He’s correct in saying that “pundits and policymakers” will debate the merits of the stimulus for years to come, but doesn’t mention that economists are all over the map on its effects and prescriptions for going forward. (Economists, no matter their pedigree, are like doctors: question five of them and you’ll get five different opinions.) In reality, the stimulus was helpful, but exceedingly inefficient and demonstrated how craven legislators were in siphoning off funds for their own political ends, running roughshod over the intent of the bill. Instead of a big economic lift—Obama’s advisers were hoping that unemployment wouldn’t exceed eight percent—it was more like a pop from a kid’s toy pistol.

I’m currently reading John Milton Cooper Jr.’s new biography of Woodrow Wilson—not particularly well-written, but nevertheless a fascinating study of a once-lauded Democratic president who’s now either derided or ignored—and came across a quote from President William Howard Taft during his unsuccessful campaign for reelection in 1912. In a September speech at a Boston rally, Taft, who knew he’d lose to Wilson because of Teddy Roosevelt’s third party candidacy, said: “A National Government cannot create good times. It cannot make the rain to fall, the sun to shine, or the crops to grow, but it can, by pursuing a meddlesome policy, attempting to change economic conditions, and frightening the investment of capital, prevent a prosperity and revival of business which might otherwise have taken place.”

It’s nearly a century later, with varying conditions, but Taft’s viewpoint still rings true. Weisberg doesn’t mention it in his paean to Obama, but still on the docket is Congressional regulation of business. Certainly, given the economic panic of last year after the Lehman bankruptcy, some intervention was necessary. The problem, as always, is that excessive and punitive regulation of business by self-interested politicians will be heavy-handed and ineffective. This is one of the main concerns of Americans with centrist political views, the people who elected Reagan, Clinton, G.H.W Bush and Obama: How can elected officials, who are more interested in their own continued employment and view everything through a political prism, be trusted to transform the country’s health system into an efficient, equitable system?

Finally, on Obama’s foreign policy (and at least Weisberg agrees with the President that the latter’s Nobel Peace Prize was premature), the Slate writer makes the absurd claim that Obama has “swiftly and determinedly remodeled America’s global role.” In replacing George Bush’s “moralistic militarism” with a let’s-all-get-along, multicultural doctrine, Obama has supposedly made it okay to be an American again. Jeesh. I’m sure the Taliban is ready to lay down its arms; Iran will embrace its Israeli brothers; and Islamic militants, not only in the Middle East, but in Western Europe as well, will have an epiphany about the importance of religious and cultural harmony.