The NL Needs the DH

A number of current MLB controversies have made it clear that the game is moving forward into a new era. One fan tries to find the best balance between past and present. 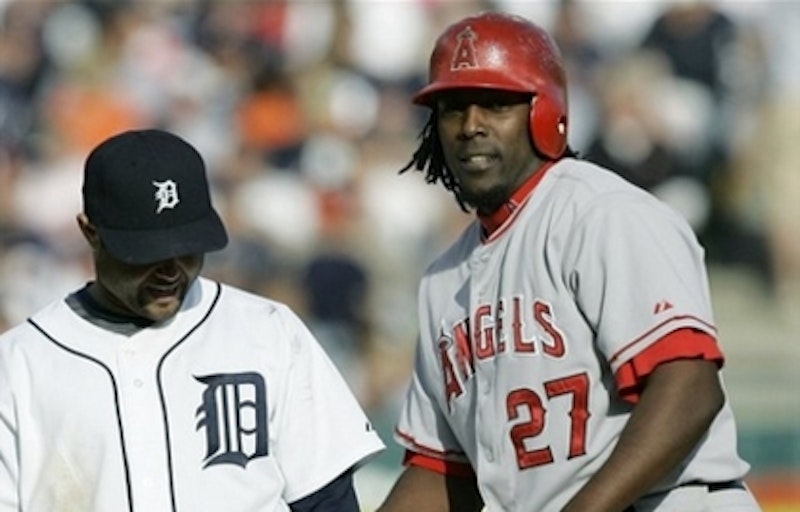 The Angels' Vladimir Guerrero, whose hair gets a little distracting during "throwback" uniform days.

Baseball is an exhilarating yet frustrating mess of contradictions, and this fan is caught in the trap—like millions of other men and women (save George Will, whose pompous moral certitude about the sport is immutable)—of trying to reconcile “purist” instincts with the undeniable improvements in the game over the past several decades. Last weekend, for example, while watching a slew of inter-league contests via the MLB “Extra Innings” package (which, regardless of varying prices depending on your locale and cable provider, costs less for an entire season of televised games than one day at a stadium for a family of four), I finally switched gears and figured it was time for the National League to acquiesce and adopt the still-controversial designated hitter rule.

Heresy, I guess, but what the hell; if you’re a Milwaukee Brewers’ devotee, wouldn’t it be delightful to see the world’s tubbiest vegetarian, Prince Fielder, in the dugout, contemplating his next plate appearance, instead of anchored at first base? One league’s dominance over the other usually runs in cycles, but the N.L. seems mired in a slump that’s likely to run longer than the Great Depression, and this was evident once again over the weekend. Sure, the strategy required of an N.L. manager is more intricate than A.L. counterparts with double-switches and more sacrifice bunts, but the two leagues might be more competitive if older free agents (or crummy fielders) could extend their careers as a DH.

That said, and here’s one of those curveballs, I can’t stand inter-league play, even though it pumps up attendance and allows fans to see star players who were once a mystery aside from the All-Star game (which, of course, has devolved into a meaningless exhibition game instead of a proud showcase) or the World Series. My 13-year-old son, with whom I have the pleasure of sitting next to in our matching easy chairs in the homestead’s television room, adamantly disagrees, but I chalk that up to his participation in a fantasy league with a bunch of school buddies. I just don’t like the disruption of the season’s rhythm, the fake “rivalries” cooked up by MLB schedule makers—sure, the Cubs and White Sox make sense, but the Rockies and Tigers?—for the sake of novelty and profit.

The Braves’ Chipper Jones complained last year about how his club drew much tougher opponents than the N.L. East rival Mets, but that’s kind of bogus since the tough teams vary from season to season. What bothers me is that when playoff spots are at stake I’d rather have my team, the Red Sox, play more times against their competitors; the Sox, for instance, won’t square off against the Tigers again in 2008. Lucky for Boston that Detroit was off to a feeble start when they played their paltry seven games, but when the wild card is up for grabs in September and both teams are possible contenders for that slot, it seems like a waste that 18 games were blown on inter-league play. It’s a losing battle, and hard to argue when the Washington Nationals drew their best crowds of the years since opening day playing the Orioles, but I’ll continue to carp.

Now, I’m a strong advocate of today’s fans having a passing familiarity with the game’s history, but is anyone else irritated by the once quaint, now obnoxious practice of teams sponsoring “throwback” days, when, say, the San Diego Padres wear their comical uniforms from the 1970s or, even worse, players donning replicas of the baggy shirts and pants of the 1930s, which is meant to honor the Negro Leagues of that era? There’s no argument here about the importance of recognizing baseball’s vicious and long stain of segregation—far worse than the drug “scandals” of today or Barry Bonds’ breaking Hank Aaron’s “hallowed” home run record—but that can be accomplished by any number of other, less confusing, gestures.

I was watching the Rays-Pirates game on Saturday night and it was nearly impossible to tell which team was which: the Bucs wore the uniforms of the Pittsburgh Crawfords, while the Rays donned those of the Jacksonville Red Caps, and it was all a blur. I can’t even imagine what Vladimir Guerrero, the great Angel, would look like in a 30s uniform: with his dreadlocks and shaggy appearance he already looks like a hobo out in right field. Dan Haren (who could double for one of the cavemen in the Geico commercials), Manny Ramirez, Jonny Gomes and Henry Blanco aren’t far behind, and that’s just off the top of my head. (That said, it’d be even worse if, by some stroke of bad luck, Vlad ended up playing for the Yanks and was forced to conform to the Steinbrenner family’s dress code, imposed, ostensibly, to reinforce the team’s image of “class.”)

On the topic of Barry Bonds, unlike the purists who’d just as soon see him banished to whatever the baseball equivalent of Siberia is (I guess Rafael Palmeiro could provide him with a map), I’d like to see him land a job. I fully believe there’s collusion among the owners to keep him out of the game, even though his agent has told all 30 MLB teams that Bonds will play for the minimum salary and then donate it to charity. Joe Posnanski, a deserved baseball blogosphere star  who follows the Royals, made the case for Kansas City adding old Pumpkin Head to their roster in a very convincing post on June 26. He wrote, after acknowledging the obligatory downside of such a move—the booing, Royals fans boycotting games, not to mention Bonds’ age—that the publicly sullen slugger could give K.C. a needed, uh, boost.

Posnanski: “One, as far as I know, Barry Bonds didn’t kill anybody. He didn’t assault anybody. He didn’t throw any games. He didn’t bet on any games. He didn’t get caught drinking and driving. He didn’t have any false gods, didn’t make any idols, didn’t covet any neighbor’s donkeys, didn’t steal, didn’t do much of anything that more or less half the other ballplayers in the game are doing.” I loved the DWI swipe at Tony LaRussa, which was thinly veiled, but his logic makes sense. In fact, I’ve long been advocating to fellow Bosox fans that GM Theo Epstein suck it up and sign Bonds as at least a temporary replacement for David Ortiz, who’s on the DL right now and probably won’t return until August (and it’s anybody’s guess how effective he’ll be). You can imagine the uproar in Boston, but it’s not like that city’s sports franchises have a pristine reputation. It’s about winning in October.

Back and forth, once more. I read a travel article earlier this month in The New York Times about the high quality of food now available at an increasing number of ballparks. I don’t blame the reporter, Peter Meehan, who’s a restaurant critic, but the following paragraph made me gag. “The sandwich was perfectly executed: an overgenerous helping of fresh Dungeness crab meat, dressed in a gossamer coating of mayonnaise and piled between two warm slices of sourdough bread that had been scrubbed with garlic and griddled crisp.” Meehan and his girlfriend also had a split of champagne and a “tall, ice-cold glass of hoppy Anchor Steam Beer” during their visit to San Francisco’s AT&T Park.

I understand the motive behind the bump up in concession stand offerings, the fireworks, the scoreboards showing highlights of a team’s past glories, the shitty classic rock played between innings and the petting zoos, among other abominations, but I don’t have to like it. And I don’t. Given my druthers this is what would be available at ballparks: beer, dogs, peanuts, Cokes and maybe cotton candy for the kids. Who wants to kill an inning waiting on line for a crab sandwich, or plate of sushi or sweet-fried plantains; isn’t food a minor part of watching a game? Well, obviously not, but it still gets my goat, particularly when I shell out eight bucks for the “chicken tenders” my older son insists on having each time we go to Baltimore’s Camden Yards.

One more thing: count me out on the issue of replays to review controversial home run calls or whether a ball is fair or foul. The amount of time consumed making a determination on a decision will be interminable—just like the NFL—and means more commercials on television. Why not just spring for two extra umps, like in the post-season, to man left and right fields? I’m no longer a Luddite when it comes to baseball—as my views on the designated hitter and Bonds demonstrate—but there are limits.