Even for successful female athletes, the attention goes to their clothes. 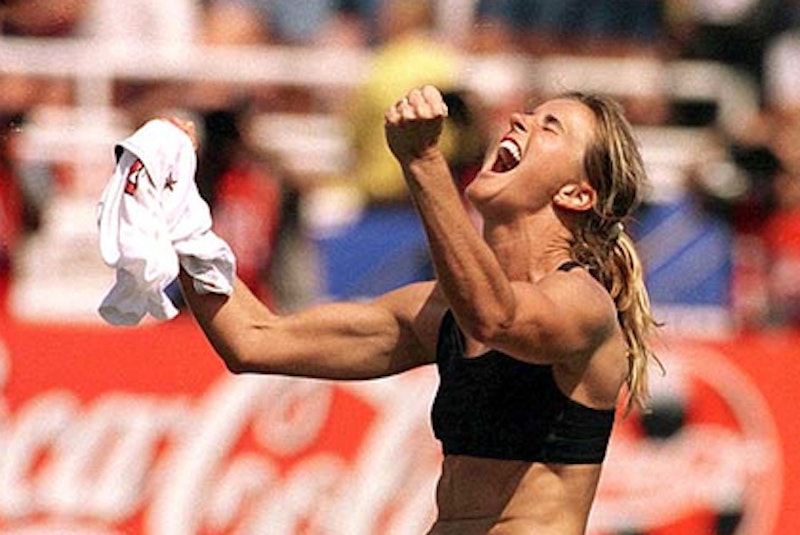 I sat in the living room after work last Wednesday, pants off, air conditioner blasting the side of my hot face, and watched the Euro 2008 Semifinal game between Germany and Turkey. A thunderstorm in Austria was wreaking havoc on the international satellite feed, and I killed time as the game cut in and out by chatting online with one of my girlfriends.

“Just watching Julie Foudy buy some time until they can get the game back on,” I replied.

“Julie Foudy…she’s the one who ripped off her shirt, right?”

I remember that moment so vividly. In a year when a knee injury and a transition to high school level soccer had me questioning my participation in the game, the Women’s World Cup and the US team’s success was particularly captivating. I watched anxiously as Chastain placed the ball for the final penalty kick, walked calmly into position and, on a beautiful left-foot shot, sent the ball flying into the corner of the net, above the goalie’s diving frame. Her face lit with excitement, Chastain ripped off her jersey and fell to her knees, before her teammates rushed in to celebrate. It was an incredible moment, so exciting and intense. And the shot of Brandi Chastain donning only her black sports bra, fists clenched in victory, is arguably one of the most iconic sports images of at least the last decade, if not history. If you know who Brandi Chastain is, you know her because of this.

Thinking back on that game—as it became increasingly obvious that the Viennese storm would not allow me to watch the current one—I realized that I could recall little else about it. I knew the goalie, Brianna something, blocked a penalty kick to set up for Chastain’s winning shot. I knew it went to penalty kicks. I knew Mia Hamm played, but that’s pretty much a given in Women’s soccer. I couldn’t remember their opponent—China. I couldn’t remember the score—0-0. Or that China would have won the game in overtime if not for Kristine Lilly’s shot clearing header. But Brandi Chastain without her shirt on? Burned into my memory.

So I guess I shouldn’t have been so surprised that on Friday morning, when searching for a descriptive break down of Maria Sharapova’s second round loss at Wimbledon, the only stories I could find focused mostly on her outfit. She wore shorts instead of a skirt. Her top looked kind of like a tuxedo. It was just plain ugly. “Did Sharapova’s menswear cost her the win?” the newspapers asked. Maybe. Her opponent, fellow Russian Alla Kudryavtseva, listed Sharapova’s ridiculous fashion choice as one of her main motivations for beating the former Wimbledon champ. Or maybe Sharapova was just off her game. Was there something different about her backhand? Did she look slow? Tired? Weak? Did the shorts and silly shirt ruffles somehow constrict her movement? It’s hard to say. Apart from a lame quote from Sharapova—“Some days the balls don’t bounce where you want them to bounce or they don’t land where you want them to land”—analysis of the match was primarily sartorial (Kudryavtseva wore a plain white skirt and a white top with red trim).

Women’s tennis has always had a fashion focus, but it seems that since the introduction of the Williams sisters, style has been just as important as skill. Certainly Maria Sharapova and her fellow athletes are not without some blame. She knew her menswear-inspired ensemble would cause a stir, and she wanted it to. And I’m sure she assumed that her superior skill would guide her through the tournament and put a cork in the mouths of the naysayers who joked that ruffles don’t even look good on tuxedoes, much less on sleeveless tennis uniforms.

Athletes aren’t just athletes anymore; they’re products that push other products. People have undoubtedly seen Maria Sharapova more times in that Canon camera commercial with the annoying little dog than have seen her play in a Grand Slam. She’s even unveiled her own accessories line for one of her many other sponsors, Sony Ericsson. And for the most part that’s fine. I see Tiger Woods’ face in commercials more often than I see my own in the mirror, but I don’t hold that against him. No one thinks that he’s any less of an athlete just because he’s an outrageous corporate shill. It is different for women, though. In a field where even the best females in the world are still considered second rate to men, any focus that draws attention away from athleticism only further widens the gap between male and female athletes.

The undue attention that is paid to fashion instead of form in Women’s tennis allows men like Justin Gimelstob, former player and an active director of the Association of Tennis Professionals, to feel justified in placing female players into one of two categories: bitch or sexpot. In an interview for a Washington-based radio show, Gimelstob called out Anna Kournikova for being a bitch, and went on to say that he would never dream of having an affair with the semi-retired player: “I have no attraction to her because she’s such a douche. I really have no interest in her…She has a great body but her face is a five.” Gimelstob was a bit kinder, though still blatantly misogynistic in his descriptions of Tatiana Golovin and Alize Cornet, referring to both athletes as sexpots. As one could expect, Gimelstob apologized for his comments, assured women everywhere that he meant no disrespect and even made a sizeable donation to The Women’s Sports Foundation.

Unfortunately, a PR-forced apology from one loud-mouthed moron isn’t going to be enough to change how we think about female athletes. Whereas we pride men for their strength, skill and speed, we still prefer our women to be simply beguiling and beautiful. And women have more than taken the hint. Anna Kournikova, who has never won a singles tournament, has garnered significant fame from her modeling career (despite her five out of 10 face). Maria Sharapova, Serena and Venus Williams have all started their own fashion lines. Amanda Beard, Amy Acuff, Gabrielle Reece and Katarina Witt have each graced the cover of Playboy. Even Brandi Chastain, who before her World Cup winning shot was widely unknown, extended her fame by posing on the cover of now-defunct Gear magazine wearing nothing but a pair of cleats and two strategically placed soccer balls. She spoke repeatedly of the “jersey incident,” answered countless questions that had nothing to do with soccer and everything to do with her bra. And I can’t really blame her. It must be hard to commit your life to a sport without ever feeling like you’ll get the recognition you deserve. So when that recognition comes, in any form, it makes sense to cling to it, to hold on and ride it out for as long as it will last. It is a shame, though, that for female athletes that recognition is far too often a factor of what kind of clothes they have on, or what kind they took off. For female athletes it is about proving first that you are a woman. The athlete part is far too secondary.