Catching a foul ball isn’t always as easy as it looks. At least not to one long-denied fan. 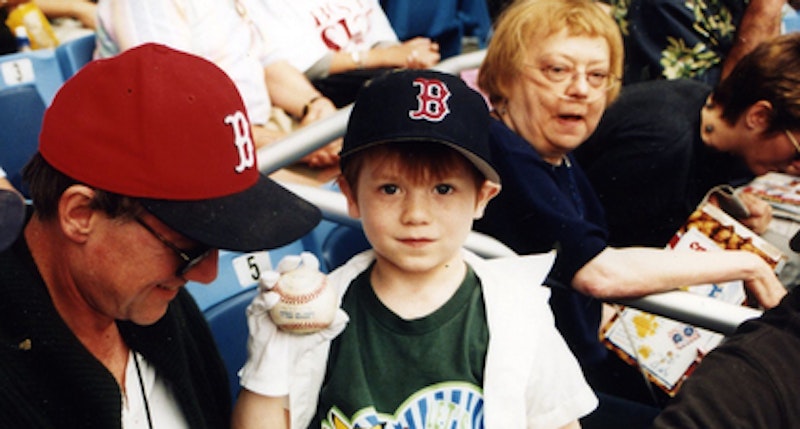 The author, left, hangs his head in shame as his seven year-old son surpasses him in glory.

Once a year or so, if you’re foolish enough to flip through the pages of Esquire or GQ there’s inevitably a frivolous list—crammed in between advertisements for $4000 Brioni suits and $1250 Ralph Lauren trousers—that’s headlined something like “50 Things Every Man Should Do Before He Dies.” Running in a marathon, polishing off a 22 oz. steak at Brooklyn’s renowned (and overrated) Peter Luger’s, initiating a threesome with two models while on vacation in Milan, hosting a bachelor’s party in a lesbian bar, telling an overbearing boss he’s got the brain of a muskrat, taking a Rolls Royce for a test-drive and purchasing front-row seats for an Aretha Franklin concert are examples of the typical fare.

Since I’m not a Chicago Cubs fan who understandably pines for a World Series victory in his or her lifetime, my wish is more pedestrian: catching a foul ball during a game (batting practice doesn’t count). Almost everyone I know who takes the sport seriously has achieved that goal, some at a ridiculously young age. In fact, my older son experienced this distinct pleasure when he was just seven, although the circumstances were a little murky. We were sitting in pretty good field level seats at Yankee Stadium one May afternoon in 1999, when Boston’s reserve outfielder Darren Lewis popped a lazy fly ball into the stands behind the on-deck circle and, as is often the case, there was a brief competition for the prize.

A college kid nearby had, in my opinion, a clear claim on the ball since he caught it with one hand and maintained possession for 10 seconds or so before it dropped to the concrete, whereupon pint-sized Nick took advantage of the scrum and wound up with Lewis’ second strike in his hand, and was absolutely delirious. My brother and I rolled our eyes at each other, anticipating a wholly unwelcome squall, but the guy, counseled by his girlfriend, was a mensch and patted Nick on the shoulder and smiled broadly, for which he received a round of applause in our section and several rounds of beer courtesy of my wallet. Even though Nick no longer follows baseball on a day-to-day basis—I think getting hit in the nose by an errant fastball in a little league game has something to do with that—the ball still sits on a mantle in his bedroom, next to an unwrapped piece of Bazooka gum Pedro Martinez gave him one day at Fenway Park.

I’ve attended hundreds of games over the years, at, by last count, 16 different ballparks, and still haven’t come away with a souvenir. If you watch baseball on television, it’s not uncommon for a broadcaster to comment on a foul ball melee and express astonishment that fans who’ve paid dearly for tickets, parking and refreshments would become so frenzied for an object that costs less than 10 bucks at most stores. The worst of them—and I’m thinking of Michael Kay (Yankees), Gary Thorne (Orioles) and Hawk Harrelson (White Sox)—even lapse into ridicule as if they’d never seen such a spectacle of stupidity.

Take it from me, a fellow who’s had a bunch of near misses—catching a foul ball would be very cool. When I was a squirt, a friend’s father won third-row box seats at Yankee Stadium, right behind the Yanks’ dugout, in a union hall raffle and I was lucky enough to go along with him. The game itself was a classic: It was late August of 1967, the Red Sox were improbably in a pennant race and Carl Yastrzemski, that year’s triple crown winner who carried the Sox to the Series, hit a homer in the 10th inning to win a 2-1 game. The following week Yaz was on the cover of Life magazine. Even more memorable, however, was that Paul, who had fortune on his side, and a mitt in his hand, snagged a foul in the sixth inning.

Years later, also at the Stadium, my friend Michael and I were just sitting down in our prime upper deck seats squarely behind home plate when the first pitch of the game came directly to him. It would’ve been an easy catch for Michael, but his hands were filled with two cups of Budweiser and so he ducked out of the way. “Why didn’t you drop the beer and get the ball?” I asked incredulously. He shrugged, the significance clearly lost on him, and told me to shut my yap.

Currently, our family takes in 15 or so games at Baltimore’s Camden Yards and though our seats are in excellent “foul ball territory,” we’ve yet to get a nibble. And that’s saying something, since unless the Yanks or Sox are in town, the crowds are usually fairly sparse. Maybe ’08 will be the year I can cross this goal off the list before I bite the dust.

Meanwhile, even though making predictions about a baseball season is as foolish as picking the winner of a presidential race six months before the general election, I’ll hazard the following guesses:

• The Cubs, for whom being a fan, says The Wall Street Journal’s Stephen Moore, “builds character—like being from Poland and getting invaded once every 25 years—won’t even make the playoffs.
• Johan Santana, the new Mets ace, will blow out his arm in June and not pitch again until August of ’09.
• The Indians, picked by a sizable percentage of sportswriters to win the A.L. Central and go on to the Series, will finish behind the Tigers, out of the money, mostly because Fausto Carmona and Paul Byrd wind up with losing records and Travis Hafner fails to hit 25 homers.
• The Yanks’ Phil Hughes wins the A.L. Cy Young award.
• The Phillies, after a crummy start, go on to win the Series, winning in six games over the Tigers.