A long-suffering Mets fan hopes the most expensive pitcher in baseball history can erase last season's epic collapse. From The Wesleyan Argus. 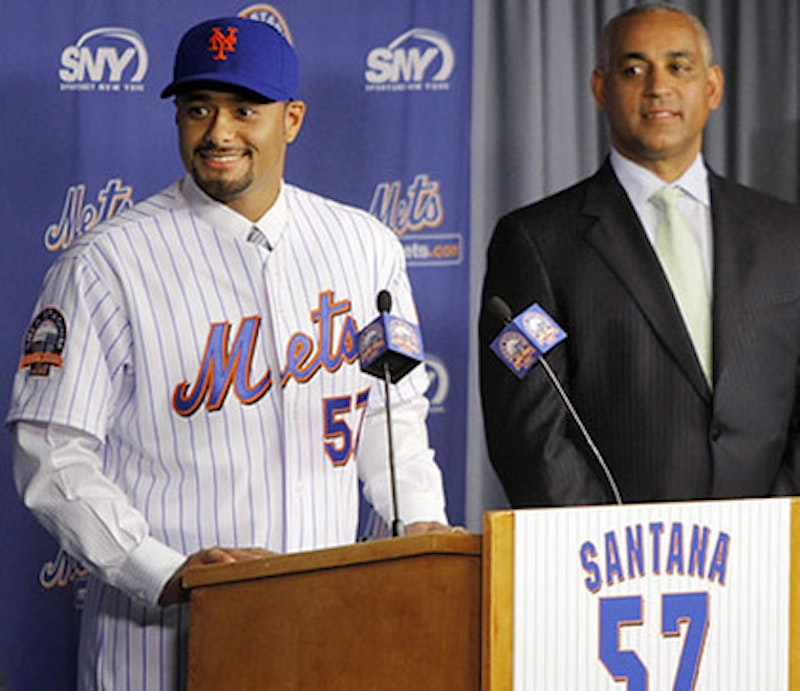 Some people find beauty in the view from mountain tops; for others nothing can outmatch a sunset. To a New York sports fan, nothing could be more beautiful than seeing Isiah Thomas get the pink slip. But to scholars and philosophers, beauty is in the eye of the beholder. Thus, to every New York Mets fan, beauty can be defined in two words: Johan Santana.

Johan, as he will be called by New York fans, is everything the Mets have dreamed for; he represents the ace pitcher for which they have desperately been searching. Johan is unquestionably the best pitcher in the game. He has the best fastball-changeup combination in the Majors, as well as being an inning eater, strikeout master, and having the intangible attitude that makes a certifiable winner.

These are all the qualities that the Mets saw in Pedro Martinez when they signed him just three winters ago. Yet when general manager Omar Minaya made that offer, it was to an older, aged and worn down Pedro, instead of the relatively young ace in his prime that is Johan.

Unlike Pedro, Johan is not past his prime and has not gone through the rigors of postseason battle as often, but he has been there before and knows what it takes to make it deep into the playoffs.

After the most notorious collapse in regular season baseball history last fall, the Mets needed to change the mindset that had captured most of Queens, and bringing in Johan was the best way to do that. Just a week before the trade was announced, the Mets were considered to be the second best team in the National League East, and to some, the third best, behind both Philadelphia and Atlanta.

However, adding Johan to the Mets rotation has now boosted them past both teams and has left them sitting atop the entire NL as the team to beat. There are few players that can affect the face of a team so strongly, but Johan is able to with his masterful control on the mound.

What most Mets fans do not even know about Johan is that he is a tremendous athlete and is a superb hitter as well; so great that even Peter Gammons, an esteemed baseball analyst, can claim that Johan will be the best hitting pitcher in the NL next year, no questions asked.

Granted, that is not one of the reasons the Mets pursued him, but it is an added bonus considering the Wilpon family decided to pony up and spend the dough on him.

The Mets did pay a price to get Johan, dishing out nearly $150 million over the next seven years, but his value to the organization is worth far more than that. Not only will he help sales, but he is also the rock on which the organization can build upon. Centerpieces like him are, as the MasterCard commercial says, priceless.

Before Johan, the Mets were a beautiful 1965 Camero, all shined up and ready to win the car show, but they did not have the engine. Now, they have their turbo high horsepower machine that will be running for a long time, and are ready to drive away with the prize.

Over the last four years in Minnesota, Johan has started a minimum of 33 games, pitched 200+ innings, had more strikeouts than innings pitched and has had a WHIP of .99. However, transitioning to the NL should bolster all his statistics as it is known to be a weaker hitting league due to the absence of designated hitters.

In a few years, analysts might need to use a microscope to see Johan’s stats. But what is most impressive about Johan’s career is that in an age clouded by steroids and astronomical hitting statistics, Johan has found a way to master America’s Pastime from the mound. And that is what the Mets faithful hope for him to continue to do as he puts on the orange and blue and toes the rubber every five days.

Other than Johan’s pitching prowess, he has added depth to the Mets’ pitching rotation as now everyone can slide down a slot. Instead of forcing Pedro to be the ace, there can be less pressure on him as the number two starter, and consequently less pressure on on John Maine and Oliver Perez, who will be occupying the third and fourth slots in the rotation.

In fact, Maine and Perez were the only combination of two pitchers under the age of 26 to each have 15 wins last season, which bodes well for the Mets organization; the sky is the limit for those two, especially under the tutelage of pitching guru Rick Peterson. So after all the offseason question marks regarding the Mets’ pitching rotation, Johan has taken a page out of Allen Iverson’s playbook and answered them all.

For now, Johan will head to spring training, the first step in the ultimate goal of the franchise, as the monumental savior of the team. He will be asked to carry a significant amount of the burden the Mets placed upon their fans after last fall, but he will shrug it all off with his cool demeanor.

There are some players whose mentality can be questioned in the New York environment, but Johan will be loved from day one, and the amoré will only grow after each start.

But after winter, spring, summer and fall, when it is all said and done, will the Mets and their fans see Johan standing on the hill, in late October, as he pitches his team to the glorious title of World Champions?