An online debate about Brooks saddles shows just how fervent modern-day bike cultists can get. 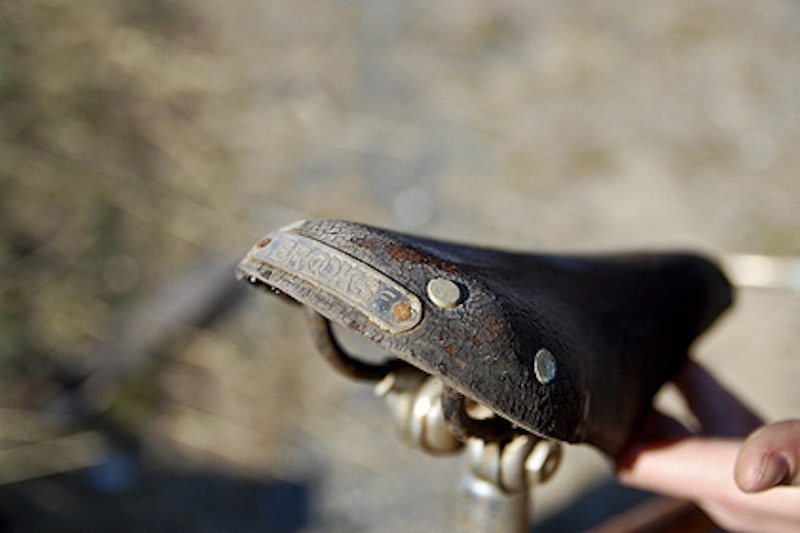 I recently took up bicycling, and like most people who’ve been participating in a sport for a few months I’ve developed many strong opinions, some of which will later make me cringe with shame. My cycling background: in June I bought, for $95, a 1987 Cannondale mountain bike. I’ve ridden it daily since, up and down the hills of New Hampshire. Unfortunately, the saddle’s a dud, making my genital area go numb. I bought a gel saddle cover at Target, thinking it would help. Actually, it made things much worse, and as I later learned from the late Sheldon Brown’s website you don’t necessarily want a soft gel saddle unless you use your bike for short outings.

I did some research and found out about tensioned leather saddles (what they apparently used to call simply “saddles” before about 1985). My father did a lot of biking in the 1970s, a time when all you needed to win the Tour de France was a nice wool jersey, a wind-deflecting moustache, and a broken-in leather saddle. As it happened, my dad kept his old road bike, complete with an Ideale saddle. I tried it out, loved it, and ordered a Brooks Champion Flyer the next day (Ideale, a French saddle maker, is gone). Brooks is an English company that started out making saddles for horses in the 1800s, and has been making leather goods without cessation since then.

The Champion Flyer (a name which evokes either a 1950s spaceship or a modern-day Japanese video game writer’s idea of an American baseball team name) is a sprung saddle, a version of Brooks’ famous B17 with a couple of fat steel springs under the seat. My Cannondale, because it dates back to the Reagan era, has no shock absorbers, plus it’s aluminum (which supposedly gives a harsh ride), so I’ve been grateful for these springs. Pre-Brooks bumps felt like getting punched in the groin; now they feel like getting punched much more softly in the groin. The saddle was comfortable from the beginning and after about 200 miles I don’t notice it at all—no numbness, no horrible sores or rashes, no heat. During my (now much longer) daily rides it melts into air and allows me to focus totally on my pedaling form or on the analysis of conversational gaffes I made from 1991 to 2005.

If you search the Internet for Brooks saddles you will find a rather interesting debate: most people seem to like Brooks, but others hate them and are very vocal about why. People who post comments about bicycles on the web fall into two categories:

1. Novices asking for advice, which they will ignore completely. These people are extremely entertaining because they don’t want to pay for or learn about anything, yet they supposedly want to know what they should buy and how to perform bicycle maintenance.

2. Incredibly condescending guys who claim to bicycle tens of thousands of miles as a matter of routine yet who somehow find time to respond to questions on the Internet all day. These people get into very entertaining fights about gear ratios or the minutia of bicycle tuning in which everyone participating in the argument will think that everyone else is completely wrong.

Anyway, these people have taken up the Brooks/no Brooks debate with a zeal and intensity rarely seen outside the rugby field. Opponents claim that Brooks saddles require too much maintenance. Remember that this is coming from people who routinely spend $40 to buy a plastic tank that cleans their bicycle chains by laving them with carcinogenic chemicals. Surely a $4.50 bar of saddle soap will not tax the income or ingenuity of enthusiasts who will spend almost $100 for a carbon-fiber water bottle holder? They also bemoan the fact that leather saddles have no defense against the rain. Apparently the technology of the plastic shopping bag eludes them.

The best part of the Brooks debate is the issue of  “break-in.” Apparently at some point the bicycling equipment community decided that leather saddles needed to mold to the rider’s anatomy before they were comfortable for long distances. It’s true that a well-used leather saddle will conform to its rider after several hundred or thousand miles, but in my experience (and in advice direct from the Brooks company) the saddles should be comfortable immediately. But bicycling nerds aren’t satisfied with Brooks’ advice to ride the saddles diligently for a while; no, they need performance and they need it now (forget, for the moment, that Brooks saddles generally weigh several pounds and would be as likely to appear on a racing bike as a bell or a plastic basket). So they have assembled a whole arsenal of more or less moronic methods of hastening the break-in. These range from the benign, using a little Lexol to protect the leather and start it softening; to the eccentric, beating the saddle with a lead pipe to make it less stiff; and to the plainly depraved, soaking the saddle in water and going over it with steel wool, then using shoe dye to “seal” the pores, whatever that means.

From my somewhat naïve perspective it looks like the Brooks debate attitude pervades the coverage of biking on the Internet. Nerds typically dominate the discussion, but I can see why they’d be drawn to bicycles. What other sport rewards a knowledge of math and geometry more directly than bicycling? My experience of bicycles for the first 26 years of my life was that they were sort of dirty pieces of furniture that could be ridden around without any specialized clothing or lubricants or technique. But this furor over Brooks led me into a world in which people review undershirts and cereal bars with a totally straight face. A cycling computer is considered mandatory equipment, and a bicycle weighing only 20 pounds and costing under $2000 rates below the “enthusiast” level. I’ve read over and over that the rider matters much more than the bike, but my god! This fervor for a technological cure! It’s infectious. I look askance at my 21-year-old bike and I’m sure it won’t be long before I shell out a car payment or two on something much fancier. And this whole eulogy to the Brooks is, after all, praise of the technical merits of a consumer good.

Anyway, out there on the roads I adore my Brooks saddle, and bicyclists who are sort of plump, into leather, or who enjoy making their bicycle look like an old man might ride it should also look into the brand. It won’t make you ride like a doped-up Spaniard, but then again, what does