In which sports-addled columnist dissects the ins, the outs, the what-have-yous of the XXIX Olympiad. 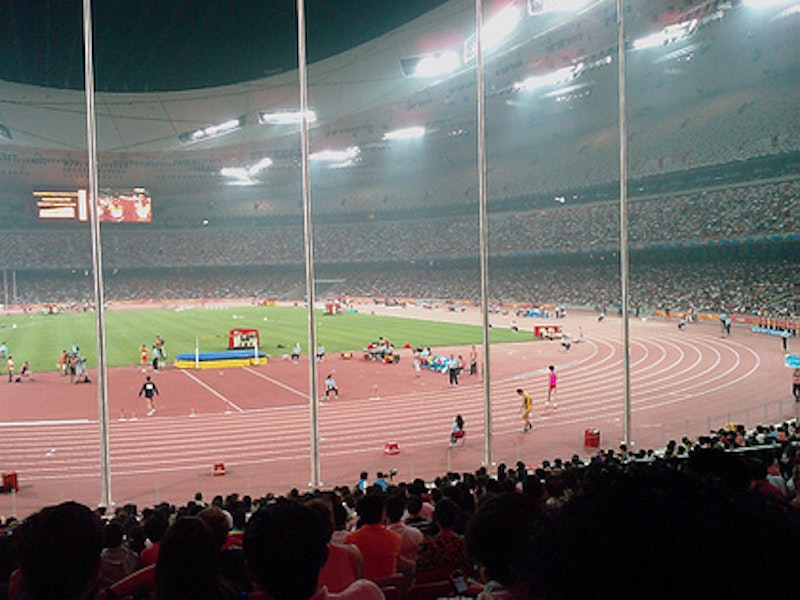 I generally don't enjoy sports unless I am participating—by which I mean wagering on that shit—but I always get waist-deep in The Olympics even though I almost never even bother to get a bet down, even when it is Olympiadding someplace more in line with my sleep and teevee-viewing schedule, like it is now with the XXIX Olympic games all up in Cathay, which is what Marco Polo used to call China, which, admittedly, fits perfectly with my current understanding of aforementioned country outside of how they (as in The Red Chinese) are Taking Over The World and stuff. I'm not, like, unduly alarmed about The World getting taken over, I mean, somebody's gotta run it, right? Also it is very much like The Weather, which The Chinese are already controlling the shit out of (as opposed to talking about it), but I can understand how a lotta people are pissed off about how there even is an Olympic Games happening in China, but beyond that, I don't know, man, I am not about people getting killed and/or oppressed/fucked over, but I think the Olympics are Good, and the Women's Beach Volleyball is coming up.

Why does it seem like either some form of Gymnastics or the goddamn Women's Beach Volleyball has been on every night in Prime Time? The other day I was watching the Archery, and that was some crazy shit. That's what The Olympics is all about, man, wacky events like Archery and Pole Vaulting and fucking Fencing. That shit is insane. There's no style points, no interpretations of routines, like with all this Gymnastics and the Degree of Difficulty times the score divided by whatever…it's just like, Altius, Fortius, and etc., you know? Win or Lose. You Win the fucking Boxing or Table Tennis or Judo or Handball or Rowing or Cycling or Basketball or Tennis or Soccer or Shooting or Wrestling or you fucking Lose.

And what's with that "Gala of Champions" crap? Don't we get enough of the cutesy-pie Showmanship in the Winter Olympics with the Ice Skating? I'm getting ready to enjoy some Olympics today and there's one of the Chinese champeens fucking around on the Pommel Horse. He is trying to ride it like a horse-horse, but it don't go nowheres! Giddyup, inanimate Pommel Horse Gymnastics Event! Now look, he got thrown off! Hilarious. Now could you and your Gold Medal move the fuck outta the way so I could maybe watch some of the Weightlifting or Badminton, hah? Stop wasting my Olympiad, man, really, we got Opening Ceremonies and Closing Ceremonies for the Pageantry and all that other crap, so don't suck up my precious teevee-airwaves with your screen test for clown college.

And look, I don't agree, but I can totally understand why they (as in The Olympics) are getting rid of Softball and Baseball after this Olympiad, because we (as in US) win all the time and that's boring, right? Especially that chick pitching for the US softball, Jeezus H. Christmas, I wonder if she could just change that motion a little bit and get a job in the Men's Baseball as one of those Submarine-stylee pitchers, huh? Those sports will come back when somebody thinks they can beat us, like maybe the Chinese in 12 years, eh? Meanwhile, Equestrian Dressage needs to go, man. Have you seen this shit? It's like those compulsory figures they used to skate in figure skating, where nobody (on teevee) would even watch 'em, going over the same figure-8 or whatever. I watched this Dressage, and it's a person in a fancy hat prancing a horse around. Boring. Plus, they give the fucking medal to the rider. Get rid of the event, or just get rid of the goofball riding the horse and let the animal do all the work and get a goddamn medal made outta something good to eat. And Synchronized diving is fucking stupid. What's next, three divers? How about 10 divers? How about as many divers as you could fit all the way around the diving pool, umkay? Why don't they have synchronized 200-Meter Dash or synchronized Pole Vaulting or BMX Cycling or fucking Gymnasticizing?

So anyway, sorry, but I'm all about some Games of the XXIX Olympiad. I mean, what was supposed to happen here in the United States of America to get China to stop doing Bad Things with the Human Rights? Leadership by example? Boycott The Games? How many Gold Medals you want China to win, man? And what about fucking Russia? Are we supposed to boycott the Russia because they got action in Georgia? Is anybody boycotting us, as in U.S.? Anyway, you figure that shit out while I go watch the finals of the women's Beach Volleyball which is apparently being played in a driving rain storm. So much for the Weather Control.