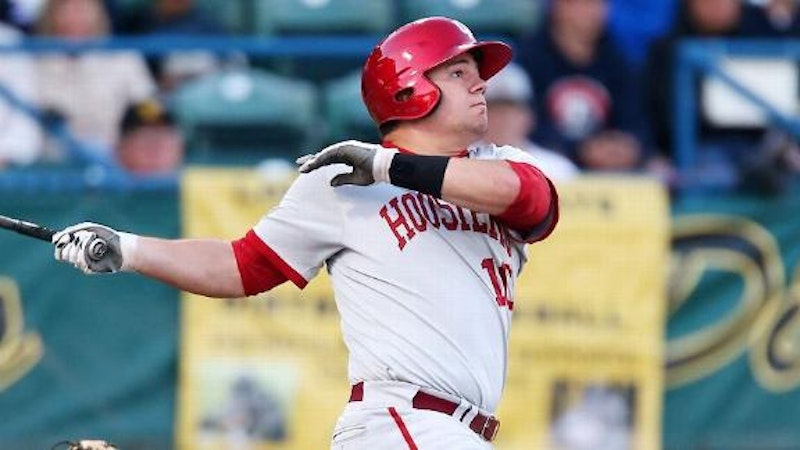 The Chicago Cubs have one of baseball’s least productive outfields. While Junior Lake flashes some promise and easy power at the plate the rest of Chicago’s outfield is a wasteland. The Cubs took a step towards addressing their outfield power outage by selecting University of Indiana standout Kyle Schwarber with the fourth overall pick in the 2014 draft.

Schwarber, who caught at Indiana but is expected to move to the outfield as a professional, was considered by many to be the top power bat in the draft and was predicted to be selected in the middle of the first round. The Cubs were rumored to be salivating at the chance to select North Carolina State lefty Carlos Rodon with their first selection. The crosstown White Sox threw the Cubbies a curveball when they chose Rodon one spot ahead of the Cubs. Schwarber may be viewed by some as a consolation prize after missing out on the draft’s top arms but he’s an advanced hitter who could move quickly through Chicago’s minor league system.

Schwarber, a lefty slugger, is expected to sign quickly and for under-slot money. Such a signing will give the Cubs the chance to get Schwarber started on his path to the big leagues and the funds needed to take some gambles on talented prospects with big bonus demands in the later rounds. If Schwarber can stick behind the plate his selection would fill a major organizational need for Chicago, but moved to the outfield his arrival in Wrigley Field could be hastened.

The Cubs’ minor league system is deep. As an advanced collegiate bat Schwarber will soon join Kris Bryant and Javier Baez, two of baseball’s Top 10 prospects, as they move towards the Major Leagues. A switch to the outfield for Schwarber also gives the Cubs a hedge against the disappointment of Jorge Soler’s constant injury problems. The talented Cuban has amassed just 368 at bats in parts of three minor league seasons due to injuries.

Schwarber’s selection may be a bit of a disappointment to Cubs fans that wanted Carlos Rodon and C.J. Edwards atop the team’s rotation in the near future. When in doubt draft the best bat available. The Cubs have loaded up on power prospects over the past several drafts at a time when a premium must be paid for power hitters on the free agent and trade markets. The Cubs are once again be operating under the philosophy of taking sure-thing bats at the top of the draft and stockpiling projectable hurlers in the later rounds. The team will have another chance to add premium arms when they finally deal Jeff Samardzija sometime in the next seven weeks.

Schwarber will soon head to Boise, Kane County or some other small town to begin his professional career while Cubs’ manager Rick Renteria is left to choose between Chris Coghlan, Justin Ruggiano, and Nate Schierholtz as he rounds out his outfield alignment. The likes of Schwarber, Bryant, and Baez can’t reach Wrigley soon enough to satisfy Cubs’ fans.