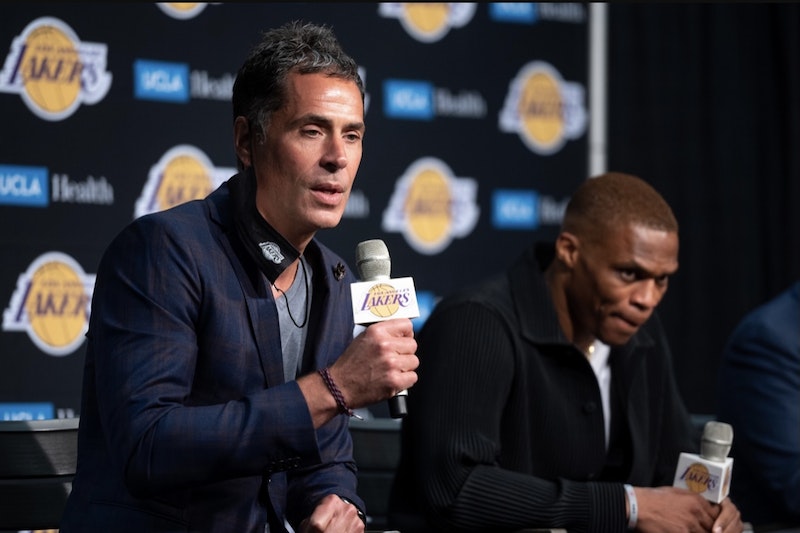 On March 8, 2017, the Lakers announced the hiring of Rob Pelinka as new General Manager. Pelinka was the longtime agent for Kobe Bryant and had become close with Lakers’ president Magic Johnson and owner Jeanie Buss. At his opening press conference, Pelinka regaled the media with personal stories. “My wife was on a trip to her college reunion,” Pelinka said. “And I’m taking care of the kids, a solo dad… My son, who at the time was 4 or 5, trips and bursts his head, bleeding out of his head. What do I do? I’m not a pediatrician. So I call Kobe and Vanessa. And they give me the plan. I show up at the emergency room to get my son stitched up. Who’s there? Kobe and Vanessa. They beat me to the hospital. Who holds my son as the doctor is stitching him up? Kobe and Vanessa.”

Was Pelinka saying he needed Kobe to instruct him to take his injured son to the emergency room? Or was he using his son’s injury to cement his relationship with Kobe and the Lakers? Pelinka’s reputation as a sport agent was dubious. He was basically forced out of his original agency, SFX, for the unethical handling of Carlos Boozer’s 2004 free agent contract. With the Lakers, Pelinka had become family. This was one of the perks of being Kobe’s agent.

Pelinka was no stranger to basketball. He played college ball with the Fab Five at the University of Michigan. After graduating, he obtained a law degree and started a sports agency. He was an agent for 14 years and called Kobe his “best friend.” To many Lakers fans this painted Pelinka as a sycophant and career opportunist. Magic Johnson learned this the hard way. Two years after hiring Pelinka, Magic quit his job as team president. He publicly blamed Pelinka. “If you’re going to talk betrayal, it’s only with Rob,” Magic said. “People around the office were telling me that Rob was saying things behind my back.”

Magic is Lakers royalty and though he made some bad decisions as team president (notably, drafting Lonzo Ball over Jayson Tatum), he also made one of the greatest moves in team history. He brought Lebron James to the Lakers. This alone should’ve secured his job for years. Instead, Pelinka replaced Magic and became the Lakers’ primary decision maker. He traded a corps of young talent (Brandom Ingram, Lonzo Ball, Josh Hart and several first-round draft picks) to the New Orleans Pelicans for Anthony Davis. This led to the Lakers winning the 2020 championship in the Covid bubble. The press wrote favorably about Pelinka and all seemed well in Lakers land.

Then the wheels came off.

In 2021, the Lakers were beset with injuries and barely made the playoffs. In the first round they faced the number two seed Phoenix Suns. With a healthy Anthony Davis, they led the series two games to one. In game four, Davis strained his groin. The Lakers lost the next three games,ending their season. Had Davis stayed healthy, the Lakers likely would’ve beaten Phoenix and made it to the Finals. This is when Pelinka’s lack of experience became a factor. Rather than making small moves to retool the team, he traded away key pieces from the championship roster: Kyle Kuzma, Kentavious Caldwell-Pope and fan favorite Alex Caruso. In their stead, he acquired a slew of aging veterans: Carmelo Anthony (37), Dwight Howard (36), Trevor Ariza (36), Rajon Rondo (35) and DeAndre Jordan (33). As Charles Barkley said, the Lakers became “a bunch of old ass geezers.”

Pelinka’s worst decision was trading for 33-year-old Russell Westbrook. Westbrook is a former league MVP and will make the Hall of Fame one day. But his best days are behind him. He’s a wannabe alpha dog on a team with the ultimate alpha, Lebron James. Westbrook’s resume was troubling. He couldn’t co-exist with Kevin Durant at Oklahoma or with James Harden at Houston. The idea that he and Lebron would gel was poorly-considered.

As feared, Westbrook hasn’t worked out. For every highlight he’s made twice as many bonehead plays. He leads the team in turnovers and has no willingness to play team defense. His three-point shooting (30 percent), overall shooting (43 percent) and free-throw percentage (65 percent) are awful. Most telling, his plus/minus rating is negative 1.5 (the team is outscored by 1 1/2 points per game when Westbrook is on the court).

One wonders if Kobe Bryant influenced Pelinka’s decision making. In 2016, Kobe told Jim Rome of CBS Sports, “When I turn on the TV and I watch players play, the player that plays with the same kind of emotion and grit and competitive intensity is Russell Westbrook. Doesn’t matter who he is playing against, doesn’t matter what the odds are… he is going 110 percent every single time.”Westbrook is owed $44 million this season and has a $47 million player option next year. He’s untradeable. This hampers the Lakers ability to fix their mistakes. They’ve been so bad, their second-best player has been G-League journeyman Stanley Johnson.

Many in the media assume that Lebron is the real General Manager of the Lakers. He supported the Westbrook trade and also brought his best friend Carmelo Anthony to the Lakers. Given Lebron’s star power, one wonders if Pelinka can stand up to him. Pelinka kowtowed to players’ whims when he was an agent. It appears he’s doing the same as general manager.

At 37, Lebron only has a few more shots at winning the title. Pelinka’s mandate to put a quality team around failed. The Lakers lack quality shooters (they’re 17th in shooting percentage) and they’re the oldest team in the league (average age 30). The team has lacked consistency and effort. After a recent thrashing by the Denver Nuggets, Magic Johnson tweeted to Lakers owner Jeanie Buss, “You deserve better.” The Lakers 2020 championship was predicated on defense (they were ranked third in NBA defensive rating). After losing the team’s top defensive perimeter players in Caldwell-Pope, Caruso, Markieff Morris and Danny Green, their 2022 defensive rating fell to 19th. Combined with their 24th ranked offense, it’s understandable why their record is below 500. Lebron has been phenomenal this year, but the Lakers might not make the playoffs. Rumors are that Coach Frank Vogel will soon be fired.

“I normally don’t root against teams,” Charles Barkley said. “But the Lakers are such wussies. They way they have tried to throw Westbrook and Coach Vogel under the bus is just really pissing me off. The people up top who put that trash together are running and hiding like cowards.”

Lakers home games have been so terrible their new arena “Crypto.com Stadium” has been nicknamed “the Crypt.” Once Lebron retires, their future is even bleaker. For this we can thank the Lakers architect of doom, Rob Pelinka.