Orioles’ Manager Dave Trembley Ought to be an Endangered Bird

There was a jarring occurrence yesterday afternoon in section 248 of Camden Yards, seconds after Kevin Millwood gave up a two-run homer to Jose Bautista, paving the way for another Orioles’ loss, their fifth out of six games. [Continue Reading] 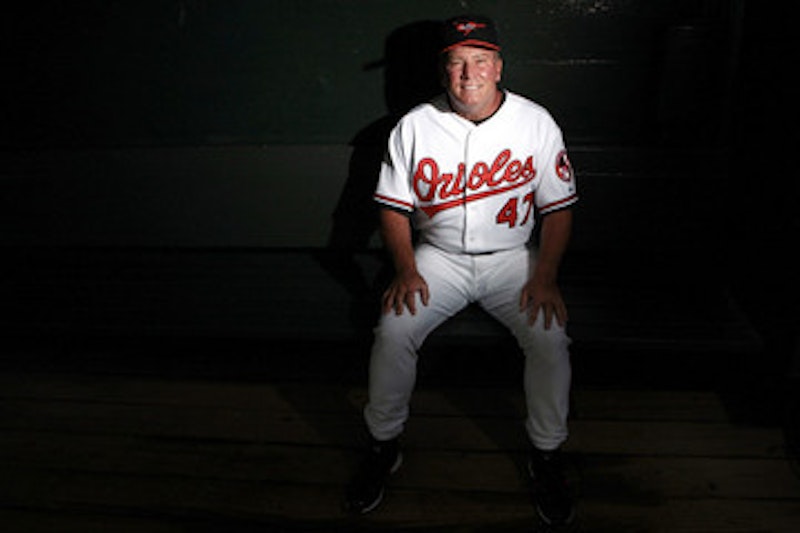 A beefy fellow, standing right next to a world-weary usher, began yelling all sorts of incoherent nonsense at Millwood, who, until that point had pitched a whale of a game. It wasn’t what the guy said—and unlike Philly fans at Citizens Bank Park, his language was family-friendly—but the sheer vitriol and frustration that made his neck veins bulge. I sit in rowdier sections at the park, but on Sundays we spring for fancier seats and always have a swell time, bantering with friends and neighbors, hoping for a foul ball.

Yesterday was different: it wasn’t only the blustery guy in the back, but the jaws of everyone in the vicinity dropping in disbelief after Miguel Tejada booted a ball to third, and then the consecutive blasts to left field, first by Bautista and then Alex Gonzales, lifting the re-building, non-Roy Halladay Blue Jays to a sweep of the O’s. My wife and our friend Michael Yockel are serious O’s fans, and they were plain disgusted.

This is the year that the fortunes of the beleaguered Baltimore franchise are supposed to change, with the goal of finishing .500 supposedly not a reach. Guess what, it ain’t gonna happen. So this morning, upon reading The Sun’s sports section and coming across Kevin Cowherd’s apologia for the team’s manager, “Don’t blame Trembley for Orioles’ ugly start,” I said out loud, speaking I suppose to Little Richard on the boombox, “Why not?”

It was a shock, at the end of last season, after losing 98 games that Dave Trembley, a stand-up guy who just can’t manage very well, challenged roster notwithstanding, was given a vote of confidence by Orioles president Andy MacPhail and kept on.

Cowherd sticks up for Terrible Trembley: “Personally, I like the tone Trembley has set for this ballclub.” And what tone would that be? Letting Adam Jones, the gifted center fielder who’s touted as a “leader” by the flacks announcing games on MASN, drift off into reveries while an opposing batter sends a rocket in his direction? Letting Nolan Reimold make a mockery of the art of playing left field? Reimold’s stick is fine, but he’s DH material. Mouthing platitudes about “player development” days being over and now it’s time to win?

No kidding, Dave. One of baseball’s evergreens when a team’s going bad is that you can’t fire the team, so the manager gets the ax. It would reek of the George Steinbrenner from a generation ago for MacPhail to send Trembley to the unemployment line today, but by mid-May, unless there’s a miraculous turnaround, in this Year of the Youngster for the club, he’s gone, and deservedly so. Then again, considering the ham-handed operations of the Orioles for more than a decade, maybe Trembley will get a raise. And then the boo-birds in a nearly empty stadium will shout themselves hoarse.