The retention of manager Dave Trembley, who guided Baltimore's team to a 64-98 record this year, isn't a hopeful sign for frustrated O's fans. 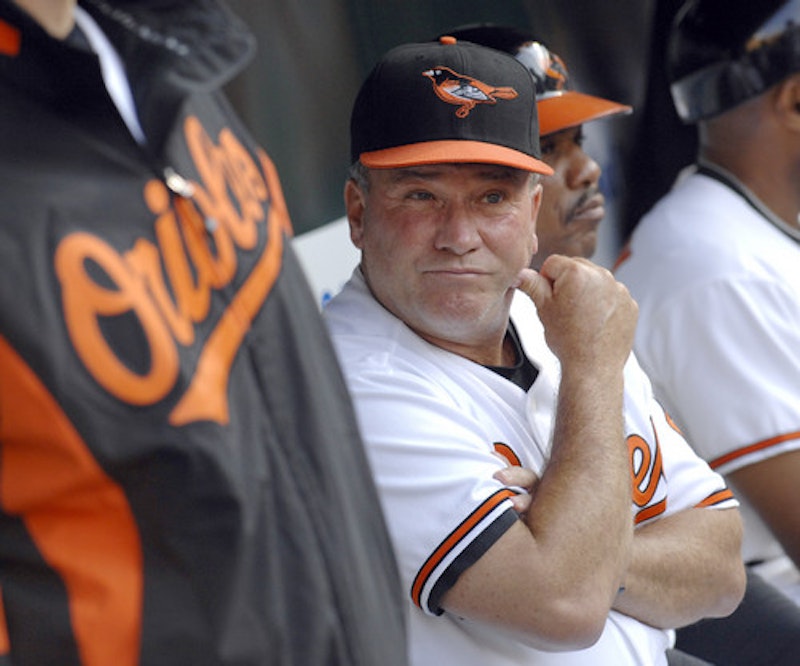 There was Dave Trembley last Friday night at Camden Yards, looking like the Cat who ate the Oriole, and on purely good-will-towards-men grounds, it was hard not to smile. Trembley, manager of Baltimore's sloppy squad, whose continued employment was the subject of speculation around town the past several weeks—after all, what else was there to talk about regarding the team, on its way to 98 losses?—was the beneficiary of a floundering franchise's confounding conservatism, given a vote of confidence from Andy MacPhail, the team's president of operations. So good for Trembley, reputedly a decent fellow, dodging what seemed like an inevitable waking of the plank. Never mind that the O's fielded a team with a lot of talent, especially the much-touted Baby Birds, and yet finished with the American League's worst record. If this was, as MacPhail preached time and again, another "rebuilding year," a fan might have expected more progress. And, as it happened, the O's set a new low for attendance at Camden Yards, drawing 1,907,163 spectators, about 40,000 less than '08, which was then the bottom number.

Meanwhile, the Cleveland Indians canned manager Eric Wedge—and in a cruel way, just days before the season ended—who, it may be remembered, led his team to within one game of going to the World Series in '07. It's said that Trembley was hamstrung by injuries (which happens to every team) and MacPhail's midseason trades of closer George Sherrill and Aubrey Huff, but Wedge, in the last two years, lost CC Sabathia and Cliff Lee, among others, and star center fielder Grady Sizemore was hurt most of the year. The Indians are now rebuilding and Wedge is out; is it unreasonable to think that Trembley, too, ought to be sacrificed in the interest of shaking the team up?

The decision to keep Trembley was such a shock that The Baltimore Sun's print edition last Saturday featured a banner headline on its front page, "O's keeping Trembley," (never mind the previous day's disappointing unemployment numbers or President Obama's failure to secure the 2016 Olympics for his many political friends in Chicago), a decision at the daily that left me wondering what was more depressing: MacPhail's puzzling strategy or The Sun's ongoing disintegration. Sure, the sports news was a big local story, but there was a time not so long ago that the paper's editors (who were at onetime familiar with the city) would've run a snipe on the front page rather than make it the lead article. The good news for the Orioles and its fans, I suppose, is that the club has a longer life expectancy than The Sun, but I digress.

A few days later, after the unexpected retention of Trembley, a manager who plays the stoic Marine at press conferences but is often accused of being soft in the clubhouse, even supporters of the decision, such as The Sun's columnist/blogger Peter Schmuck, could offer few encouraging words to the fan base for next season and beyond. On the morning of MLB's last day of the regular season, Schmuck wrote: "The road back to respectability never figured to be a short one, but the trip has been so difficult that the thought of another hopeless season in 2010 might be too much to bear for the club's beleaguered fans."

There's a chance, I guess, that MacPhail will take advantage of shedding $40 million off its '09 payroll to actively seek a slugger for the lineup, a reliable veteran starting pitcher and quality players for first and third bases. Still, given the dearth of marquee free agents in the off-season it's unlikely the O's will make the splash that the dwindling attendees at Camden Yards so desperately desire. Think about it: if you're John Lackey (the most prized pitcher on the market), Matt Holliday or Jason Bay, all of whom will play in the postseason starting this week, would you sign with a team that barely escaped 100 losses and hasn't been in the playoffs since 1997? A ton of money can lure pure mercenaries, but with so few players available it's almost out of the question that any big name will be suiting up for Trembley next year.

Perhaps MacPhail believes he can pull off a blockbuster trade, but then again, whom would the O's exchange for, say the Blue Jays' Roy Halladay? Luke Scott or Jeremy Guthrie? No, I don't think so either. (By the way, I'm betting the Yanks wind up with Halladay, exiling Joba Chamberlain, Melky Cabrera and a few prospects to Toronto.) MacPhail's not a dumb guy, and so he knows a bunch of new faces that MASN can feature on its "Birdland" commercials come next March is a necessity, but it'd take an MVP soothsayer to tell us just who they'll be.

Last month, in a critical piece about the Orioles I was slagged by Kevin Lomax, one of the guys who blogs at Eutaw Street Hooligans, and though he was confused about my own favorite team (the Red Sox, not the Yankees), the implication was that a non-O's fanatic wasn't welcome to offer commentary about the team. That's fine by me, since I appreciate passionate fans. I'll point out, however, that my family and I attended more than 20 O's games at Camden Yards this year (including all but one Sunday afternoon contest), and as someone who remembers when the Orioles were a perennial contender, as well as feeling bad for my kids' friends who grew up in Baltimore and have never experienced the thrill of a winning team, I don't feel guilty for advocating wholesale changes in the current Orioles' culture. After all, as a resident of Baltimore, I'd welcome a packed stadium every home game, not only for the energy at the park, but the resulting economic benefits for the retailers downtown whose business spikes considerably when attendance is high.

And Lomax, on Oct. 1, prior to the Trembley announcement and the O's snapping a 13-game losing streak, was less jolly, writing: "I plead with you fellow O's fans: Stop bitching so much about a team that had no business playing in the majors this year. It's not one person's fault. It's not the players, it's not Trembley, it's not Angelos and it's not MacPhail. The reason we have a shitty team is simple: The 2009 Orioles are the collective (shitty) sum of 15 to 20 years of bad decisions by hundreds of people. I'll concede that one person has had the most influence over that time, but still...he's not making all of the decisions."

Finally, I'll defer to my friend Tom Scocca, who grew up near Memorial Stadium and does remember, as a tot, winning Oriole baseball. Tom's a dedicated and stubborn O's fan (and a multi-talented writer whose book Beijing Welcomes You is set for release next fall by Riverhead) but is extraordinarily clear-headed when discussing the team. In an email last weekend, after the Trembley news, Tom told me, "I just don't see what the positive case is for keeping him. Sure, you don't want to fire the manager for firing's sake, and you don't want to blame a guy for losing when he was given such a thin team to work with, but what has he done right?... [The Orioles] are terrible at making productive out. They lead the league in blown-save percentage. They don't take extra bases. The defensive efficiency is awful."

He doesn't go easy on MacPhail either: "He can't repeat that stunt he pulled this year of just not bothering to stock up with 162 games' worth of players... Even if [Adam] Jones and [Matt] Wieters are All-Stars and two of the young pitchers turn into front-line starters, that won't mean anything if they don't fill in the hollow spaces on the rest of the roster."

My wife, younger son and I were at Camden Yards on Sunday for the final game of the season, one in which the Birds won 5-4 in 11 innings against the Blue Jays (that team, in total disarray, slept-walk through the afternoon, and when reliever Brandon League muffed two consecutive throws to first, allowing the winning run to score, I thought immediately of the great film Eight Men Out) and it was an eerie day at the park. The awful music that plays between innings was that much louder since the crowd was thin, less than 18,000, and the assembled seemed restless, walking around more than usual, oblivious to the whipping wind and action on the field. It's my hope, for the team and Baltimore alike, that this weird scene was a harbinger of the Orioles' future.