Joe West: Take Your Job and Shove It

No baseball season this decade can open without controversy. Now that PEDs are on the back burner, sillier topics get bruited about. 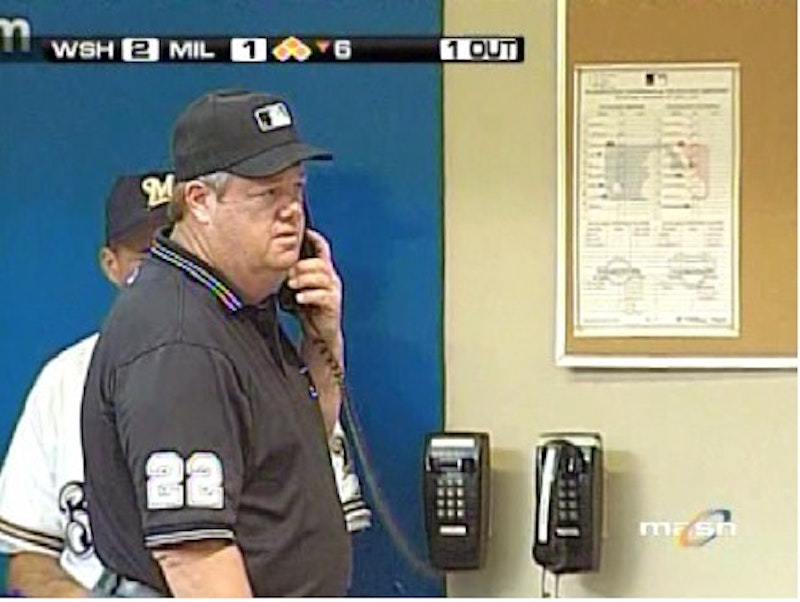 So umpire Joe West started off the 2010 baseball season with a tirade against the Red Sox and Yankees for the plodding, methodical way in which they play the game. Last week, after a typically lengthy contest, a 6-4 New York win, West told a Hackensack Record reporter, “It’s pathetic and embarrassing. They take too long to play … [This is] a disgrace to baseball.”

I’ve no idea whether West was planning on an early night in Boston so he could lounge in his hotel room and gorge on Bones re-runs, but I’ve got two words for the plump ump: hard cheese. It’s apparent that a lot of fans, sportswriters and MLB ‘s legion of Bud Selig suck-ups agree with West, but I’m not one of them. Baseball games have no time limits, and if some of the American League clubs exceed the three-hour mark, so what? If the problem was so acute, I don’t think you’d see sellouts at Fenway Park and Yankee Stadiums when those longtime rivals play against each other. My advice to clock-watchers: tune into a Pirates or Nationals game instead.

Unaccountably, West’s intemperate remarks have become this new season’s biggest controversy, probably because people need something to gripe about and since the PED brouhaha has subsided (at least until a reporter or, even less likely, someone from the Commissioner’s office, realizes that players have moved on to other substances not yet banned), shaving minutes off games in Boston and New York will have to suffice. Now, one could make the argument that the umpires themselves aren’t exactly paragons of baseball purity given their vastly different interpretations of the strike zone—much harder to disguise now that almost every sports network has a knock-off of ESPN’s “K-Zone” on the television screen—but as a charitable guy who’s simply pleased that baseball is once again underway, I’ll stick to the perhaps dated notion that umps are mostly impartial and missed calls are spread out evenly. Not so for Jason Rosenberg, who runs the excellent Yanks blog It’s About the Money, and was irate, posting a nifty chart documenting West’s failings.

Frankly, aside from the extreme tsouris that the Sox’s bullpen has caused me (did Boston GM Theo Epstein take 40 winks when it came time to address that crucial portion of his roster, believing that Hideki Okajima, nearly as old as Buddha, and fallen-from-grace Manny Delcarmen would really perform as they did a couple of years ago?), one triviality struck me during the season’s first week more than anything West had to say.

And that would be this casual observation: the Cincinnati Reds’ sort-of-disappointing 23-year-old hurler Homer Bailey is a dead ringer for actor Christian Bale.

It’s been reported that West might be slapped on the wrist by the MLB stuffed shirts, or have his pockets picked, which strikes me as rather punitive for a guy speaking his tangled mind. Sure, I understand that when pissed off ballplayers are similarly vocal and nasty, unloading on drooling members of the media, they’re often dunned about five grand or shuffled off to anger management/sensitivity classes in a suitably “green” office, but why compound this touchy-feely—and arbitrarily applied—“rule.”
My friend, NBC blogger Craig Calcaterra, isn’t as forgiving, writing on April 9: “Integrity is a two-way street and if it’s improper for players to question an umpire’s integrity, it’s improper for an umpire to do the same of the players over whom he has considerable power.” Calcaterra added, in an email yesterday, “And if West really wants to do something to speed things up he can always start calling the low strike, which he fails to do more than almost any umpire in baseball, thereby extending counts and games.”

On the other hand, speaking for majority is Joe Lapointe, writing in The Huffington Post, of all places, about the rhubarb: “Part of baseball’s charm is its leisurely evocation of summer’s slower pace. But even those who love the game have a breaking point. The Yankees and Red Sox have pushed us there. Thanks to Joe West, the conversation can accelerate and solutions can be sought.”

One solution, speaking only for myself, is never to read the crap Joe Lapointe writes ever again. Same goes for Wallace Matthews, an abysmal baseball reporter who, inexplicably, has held down jobs at Newsday, The New York Post, The New York Sun and now ESPN. Try to understand the following logic: “[T]he GMs of both the Yankees and Red Sox should assume some of the blame for the excessive length of their games, since both specifically and carefully shop for hitters who like to work deep into the counts in an attempt to get the right pitch to hit and in the process wear down pitchers.” Okay, let’s get this straight: Epstein and his New York counterpart Brian Cashman are slow-game culprits for trying to build a club that will win games. A GM in Boston or New York is always on a short leash, and if either Epstein or Cashman loaded their lineups with free-swingers, they’d probably be pink-slipped in short order. What’s next, Wallace, MLB adopting the “slaughter rule” so that the millionaire athletes/entertainers don’t have their feelings hurt?

Two Sox players, Jacoby Ellsbury and J.D. Drew, were ticked off by West’s comments, placing the blame for the slow pace on television stations, by implication ESPN and FOX. Ellsbury—who really ought to concentrate on learning how to bunt to take advantage of his speed rather than wading into baseball politics—told The Boston Globe’s very funny Peter Abraham, “I have to wait to hit half the time. Pitcher’s ready. I’m ready, and we have to wait for the commercial. Our games are on national television a lot and that’s what happens.” Equally beside the point in my opinion: sure, it’s really annoying when, say ESPN has to get that extra Taco Bell or Cialis spot in, and comes back with the leadoff hitter already in a 1-1 count, but you live with it. Sure beats the fan’s options from decades ago, when I was a kid, and nationally televised games were as rare as an Orioles closer earning a save. Not to mention that some of those advertisements Ellsbury complains about feature some of the stars he’s playing against.

Look, if you can adapt to the ridiculous addition of the designated hitter—in just the American League, mind you—then the rest of the evolution is easy. On Opening Night, April 4, when the Sox and Yanks were on ESPN in a see-saw game that lasted three hours and 46 minutes, I was on the edge of my seat for every pitch. And when the Sox rallied to win, knocking out CC Sabathia and punishing the Yanks’ pen, I’m not embarrassed to admit that it took me a bit longer than usual to fall asleep, as I went over the game in my head. Obviously, fans who are partial to other teams probably didn’t last the duration, and why would they? When ESPN’s Sunday night game features, say, the Cards and the Cubs, another storied rivalry, I’m a casual viewer, and once I’ve had my fill of Joe Morgan celebrating The Big Red Machine, pitchers from the 60s and great second basemen, the tube is clicked off.

Which gets us back to the beginning: if the players and managers of the Yankees and Red Sox don’t care about the length of their games, who is Joe West and his umpire fraternity to moan about it? As Calcaterra noted, Mariano Rivera, not only the best closer in the game’s history, but as graceful and polite a player as there is, told the New York Post: “It’s incredible. If [West] has places to go, let him do something else … He has a job to do. He should do his job … We respect and love the fans and do what we have to do and that’s play our game.”

Unfortunately, absent Alex Rodriguez or Albert Pujols being nabbed with a corked bat, or, more fantastically, a star player coming out of the closet, I think Joe West (and his like-minded colleagues) will be the talk of the baseball world for weeks to come. What a waste of jibber-jabber.