Boston’s Big Papi is finished. His departure from the Red Sox must be dignified. 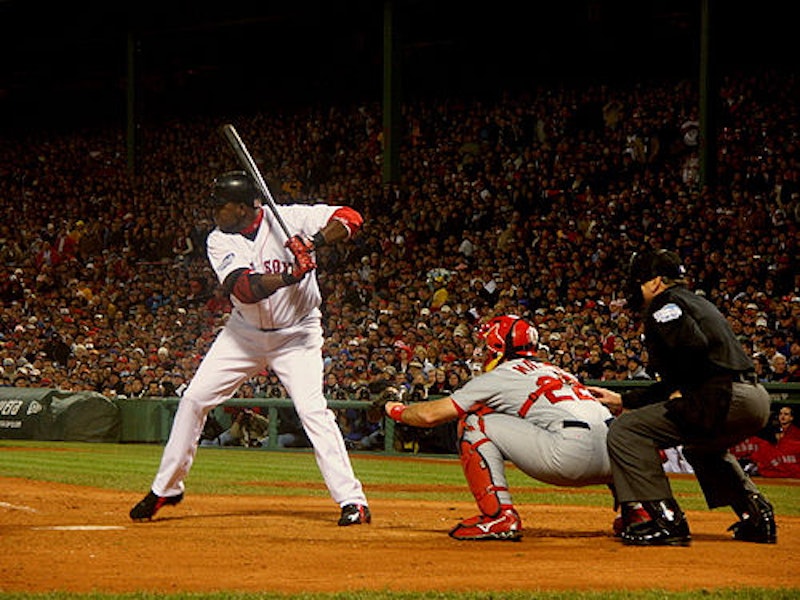 It’s a ghoul’s game in Major League Baseball today, with nearly every commentator—whether it’s on ESPN, Fox or any local “Extra Innings” broadcast, not to mention all the daily newspaper columnists and blogs—getting in his slant on just why Boston Red Sox slugger David Ortiz has utterly lost it at the dish. Big Papi is no ordinary athlete who’s reached the end of the road. He’s an icon in New England, a charismatic man whose huge smile is etched in the face of Sox fans, as well as the recipients of all the charity work he’s done in Boston and his native Dominican Republic. Except for particularly misanthropic Yankees fans, who are delighted at Ortiz’s struggles, most men and women who follow the game closely find his astonishing feeble swings and misses at balls he used to crush plain sad. It’s not as if we’re talking about Barry Bonds or Alex Rodriguez, just two players who are easy to root against.

The real question is how Boston’s normally sober and calculating general manager Theo Epstein is going to negotiate Ortiz’s exit from Fenway Park. He’s in a real bind: when Epstein dispatched onetime Sox legend Nomar Garciaparra to the Cubs at the 2004 trading deadline, there was some grumbling, but the oft-injured shortstop had become, by that season, a malcontent who was hurting the team not only on the field but in the clubhouse as well. As a Sox fan, I applauded Epstein for having the guts to make that move; and when the team finally won a World Series a few months later, most of Boston agreed. But Big Papi? Man, Epstein will have elephant-sized balls to release the big lug, despite the inevitability. It’s my bet that Epstein will take action, but probably later rather than sooner, as sentiment will prevail over business.

My younger son and I watch Sox games almost every day they play, and although our sunroom is decorated in part by Sox Series banners from ’04 and ’07, as well as an Ortiz bobblehead, we’re in agreement that he’s got to vamoose. This was no easy conclusion: during the playoffs last year and the first month of this season, we joked about the man who bats third morphing into “The Big Popout,” and if runners were on base, hoped he’d whiff instead of hitting into a double play. Booker even included one of his Ortiz t-shirts in a time capsule at school, on the youthful presumption that would result in a sudden voodoo-like resurgence. As June progresses, however, and the Yanks look to be strong throughout the season, Papi’s new nickname is “The Dominican Hole,” a guy who inspires even less confidence that error-prone shortstop Julio Lugo (one of Epstein’s most serious goofs as GM) at the plate. It’s a dreadful situation.

The Boston Herald’s acerbic Gerry Callahan, who’s the sports equivalent of his colleague Howie Carr in that media-hothouse town (at least until The New York Times Co. shutters The Boston Globe) was matter of fact in his June 2 column on the subject. He wrote:
Sticking with Ortiz now serves no one’s best interests, except of course, the Yankees. On Sunday afternoon in Toronto, Ortiz came up in the fifth inning with no outs and runners on second and third. Right-handed nobody Scott Richmond was pitching for the Jays. First pitch was a 93 mph fastball down the middle. It was like asking the spelling bee champ to spell his name, but Ortiz couldn’t get the first letter. He hit it straight up in the air in front of the plate, a harmless popout. The Sox won the game, but their DH was still completely lost.
Some people would like to see Ortiz stay in the lineup, but some people watch horse racing for the broken legs. Enough already. Time to put Papi out of his misery.
It will be a sad day for Sox fans when Ortiz leaves the stage. It will be sadder still to watch this go on much longer.
Hard to argue with that. Theories abound, of course, about why Ortiz is doing an impeccable impersonation of the great Willie Mays’ last embarrassing days with the New York Mets. Was Papi juiced, and that’s why the wrist injuries occurred? Well, sure, he probably was, since every player is suspect now, especially after A-Rod and the asshole known as Manny Ramirez have had their comeuppances. Would it surprise anyone if Ken Griffey Jr. was exposed as a ‘roid user? So yes, I think it’s likely Ortiz was on the baseball grift, procuring some Dominican drugs during his heyday. And it’s probably also true, as others have speculated, that he’s not really 33, but several years older. And frankly, had Ortiz said no mas to more second helpings of mashed potatoes or Whoppers, he wouldn’t be so enormous.

My friend Tom Scocca, an Orioles fan who’s both cynical and sentimental about the team he grew up rooting for, and a fine writer whose hilarious stuff can be found at theawl.com, is blasé about Ortiz. He told me, “I don’t really have a guess as to what’s behind it. But it seems very old-fashioned to me—whether he was on and off PEDs himself or not, this reminds me of the days before steroids and growth hormones, when some guys would just fall apart from age all at once.”

I respect Tom’s opinion about a lot of things, especially baseball, and I guess his conclusion is the most palatable, that Ortiz has just hit the end of his spectacular run in Boston. But it doesn’t really matter what the cause is: Big Papi has to be shown the door, albeit with as much grace as can be mustered. He’s still under contract with the Sox, pulling down $12 million this year, so it’s not like he’ll starve. It’s time for Epstein to create a unique position for Ortiz, on or off the field; whether it’s in a coaching capacity, scout, roving cheerleader or judge of the team’s kangaroo court. Dragging on this charade is wrenching to watch—as well as detrimental to the Sox’s playoff chances—but once it’s over, Ortiz will become Big Papi again and retain the affection of millions of Sox, and baseball fans, for his lifetime and beyond. It’ll be an enormous pleasure as time passes by a new Sox bambino emerges and those of us so inclined can gush, “Jeez, that swing reminds of Big Papi!”