Defend yourself, family, and minyan with these ancient Semitic martial arts techniques. 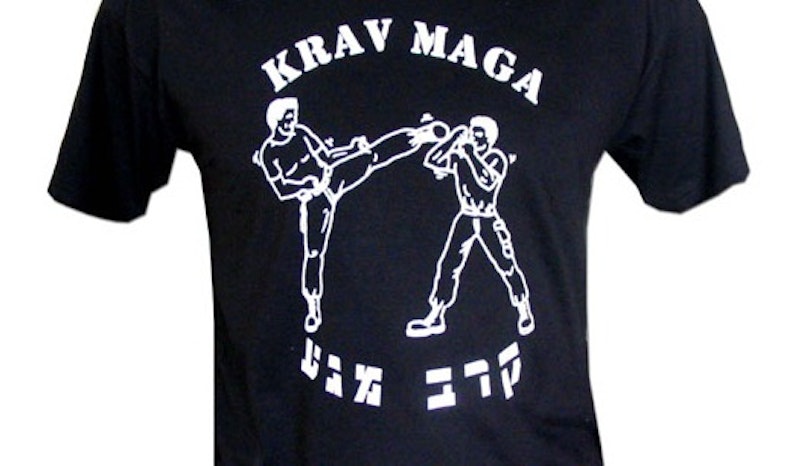 There’s a lot of misinformation floating around about Krav Maga, the ancient art of Hebrew self-defense. Sure, some sources, including Wikipedia, claim that a Slovakian boxer invented Krav Maga in the 1930s, and, strictly speaking, it’s not a martial art but rather a practical means of subduing your opponents without recourse to Eastern philosophy, serenity, or special outfits. I beg to differ: I recently found, in the Princeton University rare books archive, a copy of a Talmudic commentary from 1411 in which the author refers to a self-defense technique that, loosely translated, means “Whining Crane,” a technique which bears several unmistakable similarities to the modern practice of Krav Maga. The commentary continues to list the hidden techniques of the ancient Krav Maga masters, tough men with extremely dense beards who could kill you 14 different ways before their bialys were finished toasting.

There were three Krav Maga masters: Rabbi Chaim, Rabbi Avram, and Rabbi Baruch of Chelms. Tales of these three rabbis pervade Yiddish literature, and few readers will be ignorant of the story in which Rabbi Baruch, on his way back from the dry cleaners, encountered a group of Tartar dragoons who forced him to dance for several hours out of the erroneous belief that this would improve their credit ratings. Rabbi Baruch complied and spent the time of his dancing working out the ancient puzzle of why God sent all those terrible boils and tight shoes to the Israelites; and at the end of the dance he used the Krav Maga technique called (loosely translated) “Hand Snatches the Lox” to subdue all the Tartars and their horses. They awoke over a week later in Prague, each one the general manager of a profitable delicatessen.

I spent hours translating the rabbi’s secret techniques into English, and I now provide them for the benefit of the modern reader:

The Schande: Using right or left hand, keeping elbow relaxed, bending slightly at the knees, reach into pocket and grasp Blackberry; call opponent’s mother and tell her that opponent is acting like a vilda chaya, and this is what she brags to Mrs. Rosenbaum is aydel gepochket?

Variant: the Schande far di Goyim: Same as above, but call opponent’s blonde girlfriend whose father is on the board of Mass General and has promised to play squash with opponent.

The Tsoris: Right arm raised and tensed, pinch bridge of your own nose with thumb and forefinger and sigh deeply. “Darf min gehn in kolledj?”

A feier sol ihm trefen: Pre-fight, in a relaxed stance, disparage your opponent by telling a close friend or your mother that your opponent gives you such a chaloshes and that his shirts all fit very poorly.

A maidel mit a vayndel: Before the fight have your cousin Rachel—who, if she weren’t your cousin, yow!—take your opponent out to dinner at Tresky’s and maneuver him into ordering the chicken.

Af mir gesogt!: Hands in loose fists at hips, raise eyebrows and look upwards as if you wished that you, like your opponent, were a resident at Mount Sinai with excellent prospects.

The Kleinigkeit: Right arm held at the side, palm down, raise and extend forearm while flicking fingers to indicate that the opponent is a person of no consequence.

A gonif brent das hittel: “Really, maybe you should consider analysis if all you want to do is fight people, I mean, Freud would probably argue that you really want to fight your father, which I think would be an advantage for both of us since he’s in a wheelchair and I bruise very easily.”

The Afikomen: The master of Krav Maga knows that what the opponent cannot see, he cannot punch; with knees bent and arms raised in a loose defensive position, hide in a wardrobe. If you should bring a little snack to enjoy while you’re in there, what would be the harm?

The Farshlepte Krenk: “Look, I think we’ve both proved our point, but I have theater tickets for tonight and you should probably get that mole looked at, so why don’t we call it a day while I still have some bones left?”

Azoy gait es: So, you lose the fight—this is the end of the world? With hands at rest position, elbows bent, raise shoulders as if to say “Eh, it could always be worse.”