How college football became this columnist’s one true love. 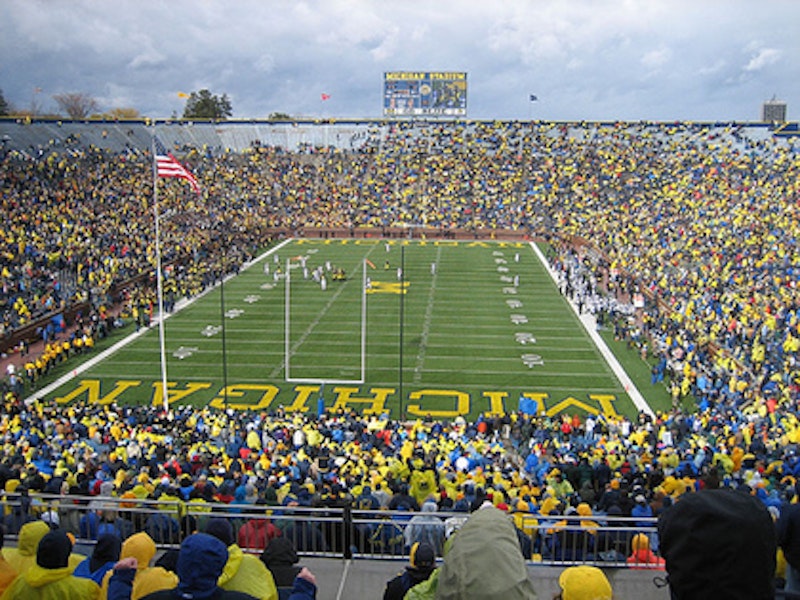 My puppy has never seen fall before. At only six months old, she probably doesn’t even remember what real cold weather feels like. She doesn’t know how each gentle caress from the gods of autumn means that the preceding eight brutal months have finally subsided back where they belong. As of today, college football season—the true joy of fall—is finally here.

It wasn’t always this way for me. I grew up in a home without college football, instead devoting my sports attention to my Baltimore loves, the Ravens and especially the Orioles, the only team that has been with me for my whole life. Maryland just isn’t really a college football state unless you live in Annapolis and are one of those people that are a little bit too into Navy. But five years ago, I was accepted into the University of Michigan and began my torturous love affair with Michigan and college football.

This season is a strange one. For the first time, Michigan football has surpassed the Orioles and attained Most Beloved/Hated Team status. Michigan, my team for a mere five years, has eclipsed the team of my childhood. Such a momentous and rapid change in sporting tastes has my head spinning, trying to figure out how this could have happened, how college football could have become my distractive poison of choice.

You see, college football is an enigmatic beast in the world of sports. On the one hand, it is massive and universal, bringing football light into spheres of professional sports darkness like Alabama or overshadowing pro teams in places like Florida. Yet, it is surprisingly provincial, absent in massive markets like New York or Chicago. Professional football still dominates the American sporting world; watch ESPN for 20 minutes and you’ll see it’s the case. The NFL is king.

But the largest American stadiums are not found in the big pro cities like New York or Boston. No, they’re found in places like State College, Pa.; Ann Arbor, Mich.; and Knoxville, Tenn. I’ve traveled thousands of miles to see Michigan play in the Rose Bowl, but I’ve never even considered driving a few hours to Pittsburgh or New York to watch the Ravens. I’m not alone. The amazing thing about talking to away fans at a college football game is that most of them have actually traveled. It isn’t like the Yankees or Red Sox fans that pollute most visiting stadiums with bandwagon locals and transplants from the big metropolitan areas, these college football fans get in the car or get on a plane and go.

There is something within college football that inspires this intensity. There is something that lights couches on fire in Morgantown, W.Va. and Columbus, Ohio. There are the countless eggs and beers—and rocks—I’ve seen thrown at visiting Ohio State fans in Ann Arbor. Then there are the tears I’ve shed, making Michigan football one of only three things in the world that can make me cry (The first two: Field of Dreams and Jeffrey Maier). As painful as the Orioles are to watch sometimes, Maier’s interference was the only time they’ve ever made me cry. That pales in comparison to my five Michigan-induced tear sessions—in a much smaller sample size, no less.

The two sports can’t be compared, however. Baseball is beautiful, precise, and perfect. You enjoy baseball, you don’t just watch baseball, you take it in. For six months, you become attached to your players and watch the slow burn toward victory or defeat. But the whole experience can sometimes be a little too gradual and a little too mechanical. It requires totality and time. It is a marathon.

College football is visceral. College football is a sprint. There is nothing like it. It ignites for 15 glorious weeks, flames out, then explodes a month later for one supernova week, and then disappears again into the longest off-season in American sports. The relieved joy each Saturday after an awful week of waiting is much greater than the sum of the little joys seeing baseball every day. Within those sixty Saturday minutes, a lifetime of stories unfolds. There is often no build-up and no warning for the most haunting moments. A come-from-behind home run does, after all, need at least one man on base. An interception returned for a touchdown provides instantaneous change. Likewise, a plodding drive builds more tension, fear, and sick stomachs than any inning of baseball. It is like watching your nightmare—or your dream—unfolding before you, one six-yard curl route at a time.

This is what keeps you. This is what draws you in. But there is something else. Something deeper that makes you do things like paint “Fuck Ohio” on your face. There’s something that makes it more than a fun game to watch, and that’s tradition. That’s what caught me.

Baseball is a game steeped in traditions, too, but those traditions are so much less involved. They are old records, distant and untouchable. Baseball happens, and you happen to be sitting there watching it. College football traditions bring everything and everyone together. Singing the fight song is just as important on game day as scoring a touchdown. Whether you’re five years old or a newly enrolled freshman, when you step into that stadium, it all becomes yours. Like it or not, you now have an identity. It means something more than just “You were born here.” It’s a family—whether you went there, grew up there, or simply liked the helmets—and you are expected to sing loud and know the cheers.

The NFL sold any semblance of its tradition to bland stadiums and parity-induced watered-down rivalries. It is a product, it is good, and progress is all that matters. But there is nothing holy. Outside of Lambeau Field, where can you make pilgrimage? College football has its glorious temples still intact: The Big House, The Horseshoe, The Swamp, Death Valley, The Coliseum. There is dotting the “I” in Script Ohio. There is the roar when your team runs out under the banner. Then, once a year, you get your shot at your rival, that’s it. One chance. This isn’t the 19 Red Sox-Yankee games they get per year. If you fail, you wait 365 days until redemption. I’ve been waiting almost 1,500 to beat Ohio State. I’m still counting down the days until we get that one more shot. But it’s getting closer, I know it is. I can smell it in the wind. Fall is here. Football is here. Rejoice.