Amnesty for All Baseball Players

George Bush, given a shot of courage, could right a wrong and short-circuit the obsessive controversy over the “Steroid Era.” 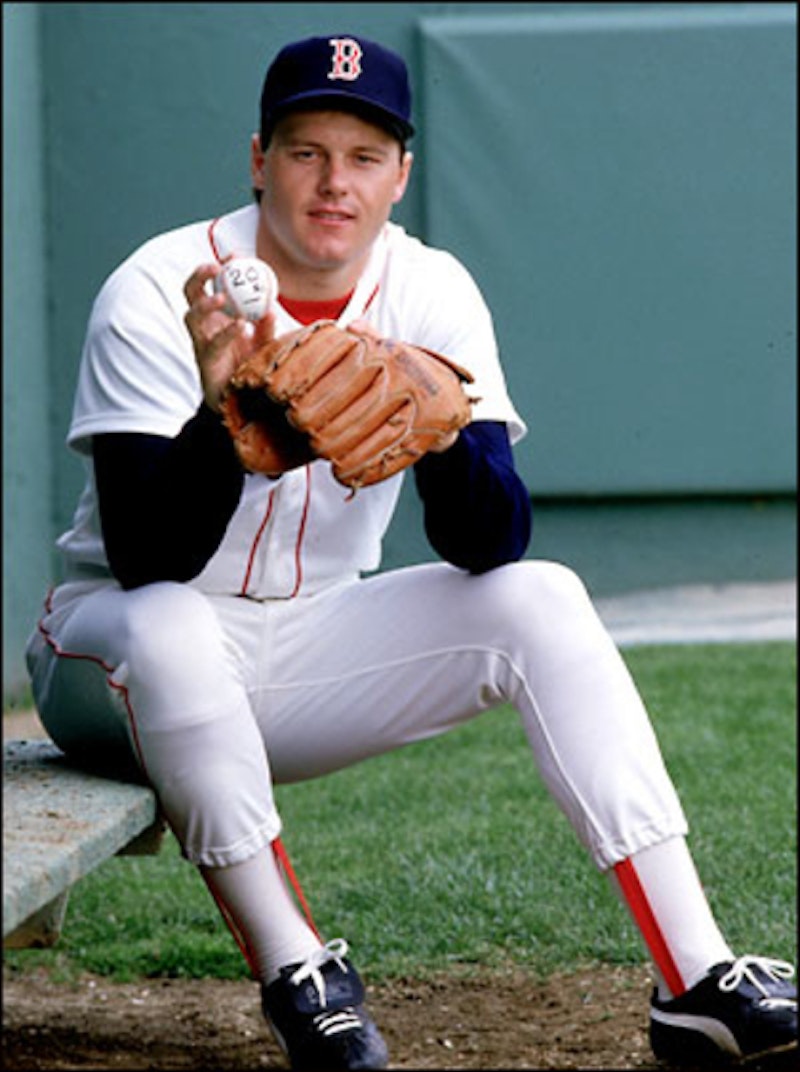 What would be the downside to President Bush issuing a blanket amnesty to all the baseball players who’ve been implicated, or suspected, in what is now referred to as the “steroid era” of the sport? The collective uproar from the nation’s scolds would be deafening, at least until another pop culture extravaganza captured the public’s attention, but it’s not as if his popularity ratings could slide much further. Besides, it’d be entertaining to see Barack Obama and John McCain field questions on the subject, and more importantly, it would put an end this ultimately inconsequential sideshow.

There is precedent for such an edict: On his first day as president in 1977 Jimmy Carter made the sensible (if more serious than this sports nonsense) decision to pardon nearly all the Vietnam War draft evaders, an action that was met, rather quickly, with an “it’s about time” shrug of the shoulders.

Last week, right as Rep. Henry Waxman’s House Committee on Oversight and Government Reform was passing along its recommendation to the Justice Dept. that Bad, Bad Roger Clemens be further investigated—perhaps resulting in perjury charges and a stretch behind bars—the World Champion Boston Red Sox were feted at the White House for their Series victory over the Colorado Rockies last fall. It was a jolly affair, not only for former Texas Rangers owner Bush but Washington politicians as well, many eager to see David Ortiz up close and maybe get an autograph for the kids.

I especially enjoyed the Boston Globe’s description of Vermont’s Sen. Patrick Leahy—talk about a morals cop!—who, “camera in tow, pressed his way through a throng of reporters lined up in the West Wing driveway before the event to get to his front-row seat” next to his New England colleagues.

Why Congress has devoted even a minute to the use of PEDs among baseball players in the past decade and a half is a bipartisan disgrace, as was retrieving former Sen. George Mitchell from mothballs to head a committee charged with poring over medical records, dirty syringes, gossip and conflicting testimony all for the purpose of “cleaning” up the game. Clemens, never one to shy from creating a narcissistic spectacle, is guilty of ginning up the ruckus, as if any sports fans really needed to know that his former trainer allegedly injected chemicals into his butt, but even if the charges are true, should the legendary pitcher—or Barry Bonds or Miguel Tejada—do time for a victimless crime? It could be he’s forfeited his once automatic entrance into the Hall of Fame (and if so, big deal), yet it’s just dumb to imply he should be incarcerated for perjuring himself before a Congressional hearing that shouldn’t have even occurred in the first place.

The New York Times’ Murray Chass is without question New York’s worst sportswriter, and he’s predictably dogged Bonds and Clemens on the steroids/HGH farce, but the Daily News’ Mike Lupica owns this story. I’ve always liked Lupica’s take on sports—even if his mixing anti-GOP barbs into an article about spring training is irritating—but his relentless attack on Clemens and other “cheaters” has, at least to this reader, soiled his reputation just as badly as the athletes he judges. There was a great comment on the News’ website last week after another Lupica holier-than-thou diatribe, from someone with the handle of “pag”: “Who is [Lupica] anyway? The King of Siam? He thinks he’s the head of the Thought Police. No one is allowed to disagree with him [referring to the fact that unlike many News sports articles, Lupica’s columns have no option for reader comments].”

You’d think, even by skimming Lupica’s repetitive bleats about Clemens’ perfidy, that the Texan stood accused of waterboarding Grady Sizemore or conspiring with financial companies to dole out subprime loans to potential homeowners who apparently didn’t realize that something was fishy when told that no down payment was necessary. On March 2, Lupica did the seemingly impossible and upped his invective level, writing that when Clemens, alone among accused ballplayers, aggressively (and showily) fought for his reputation his posturing was akin to “talking like a drunk on a crying jag.” Piling on further, he slaps around Tony La Russa by saying, “[He] still doesn’t believe Mark McGwire took anything and it makes you think that La Russa also still believes that George Bush won Florida in 2000.”

Lupica, of course, doesn’t have a monopoly on self-righteous screeds. The Washington Post’s Thomas Boswell, the longtime sportswriter who’s now the equivalent of his colleague David Broder for issuing the mushy opinions that cling to “conventional wisdom,” is aggrieved that in this late winter “a time of year when [baseball] is usually praised rhapsodically,” the sport is poisoned by “embarrassing headlines and abject apologies from its infamous players.” Boswell, noting that the Washington Nationals haven’t sold as many season tickets to their new Nationals Park, frets that “scandals and scoundrels” have, in addition to the sluggish economy, dampened enthusiasm among fans. What baloney. While it’s true that many corporations are cutting back on their travel and entertainment budgets—less skybox seats for bigwigs who haven’t sufficiently contributed to the bottom line—does Boswell really believe that MLB attendance will take the same kind of hit as the stock of The New York Times and the Tribune Co.?

Almost alone amidst all the doomsayers in New York’s sports media, The New York Sun’s Tim Marchman is a baseball writer who has mercifully directed his attention to the game itself rather than the asinine concentration over who popped what pill and who injected who in the past decade. Taking an almost heretical stand, Marchman last week fully embraced the rumor (since debunked) that the Tampa Bay Rays may sign Barry Bonds to a one-year contract.

Although Marchman agrees that the home run king is a creep, he says that the team, stocked with talent that could make it a long-shot contender, ought not have any compunction about “bringing on the best hitter in baseball history for one last stand.” He concludes: “[I]t’s not at all hard to imagine a scenario where the Yankees’ young pitchers struggle, the Rays’ young pitchers blossom, Bonds rakes, and the wild card spot comes down to the last week of the season. That, not IRS probes and tales of dirty needles, is what baseball is all about.”

Chass, an ancient sourpuss who’s probably still vexed that all games aren’t played during the day, took the conventional stand on the Bonds rumor, congratulating the Rays’ ownership for backing away from an acquisition of Bonds. He said such a signing would be a “disaster” and do harm to the team’s “young and, in some instances, impressive players.” Never mind that the Rays, stuck in an awful stadium that draws anemic attendance, might attract a lot more locals to games if Bonds hit homers and passed on to the kids, if only by observation, the benefits of discipline at the plate.

Marchman understands that athletes, today and in the past, have “cheated” and still the game endures. Think of the storylines for the upcoming season: For example, will Johan Santana lead the Mets to the World Series and allow fans to forget the team’s incredible collapse last September? Will Hank Steinbrenner, the new face of the Yankees’ ownership who recently claimed ESPN was in the tank for the Red Sox, fire Joe Girardi if the club is playing .500 ball by Memorial Day? What team will be this year’s sleeper, like the Tigers in ’06? Could be the Reds, maybe the Astros or even the disabled Twins who, despite having MLB’s wealthiest owner, auction off their best players every couple of years?

David Joseph, executive director of a non-profit organization in Los Angeles, made sublime sense in a Wall Street Journal piece on Feb. 29, dismissing the highbrow condemnation of ’roid-happy players by suggesting that what really upsets sportswriters is the taint on the various records held sacred in baseball. He sums up, “I love baseball for the artistry of Willie Mays, the precision of Joe DiMaggio, the ferocity of Ty Cobb, the raw power of Mickey Mantle, the incomparable courage of Jackie Robinson. But hallowed [records]? Save that for churches.”

Finally, Lewis Lapham, the misanthropic former Harper’s editor, who may or may not give a toss about baseball, put the steroid scandal (if perhaps satirically) in perspective, writing, “Deny an aging outfielder the right to inject himself with human-growth hormone, and what does one say to the elderly philanthropist who steps out on an evening with a penile implant and a flower in his lapel?”

Bush, a feverish baseball fan, has nothing to lose by doing the right thing and ending this non-issue by pardoning all involved. An opening day proclamation would be just right, with the added bonus of leaving poor Mike Lupica sputtering and spewing in his Daily News office.

—An earlier version of this article appeared in New York Press (nypress.com).