After a two year drug suspension, NBA player Chris Andersen steps into a key role for a playoff caliber team. Will his unconventional personality help or hinder the New Orleans Hornets? From The Hullabaloo. 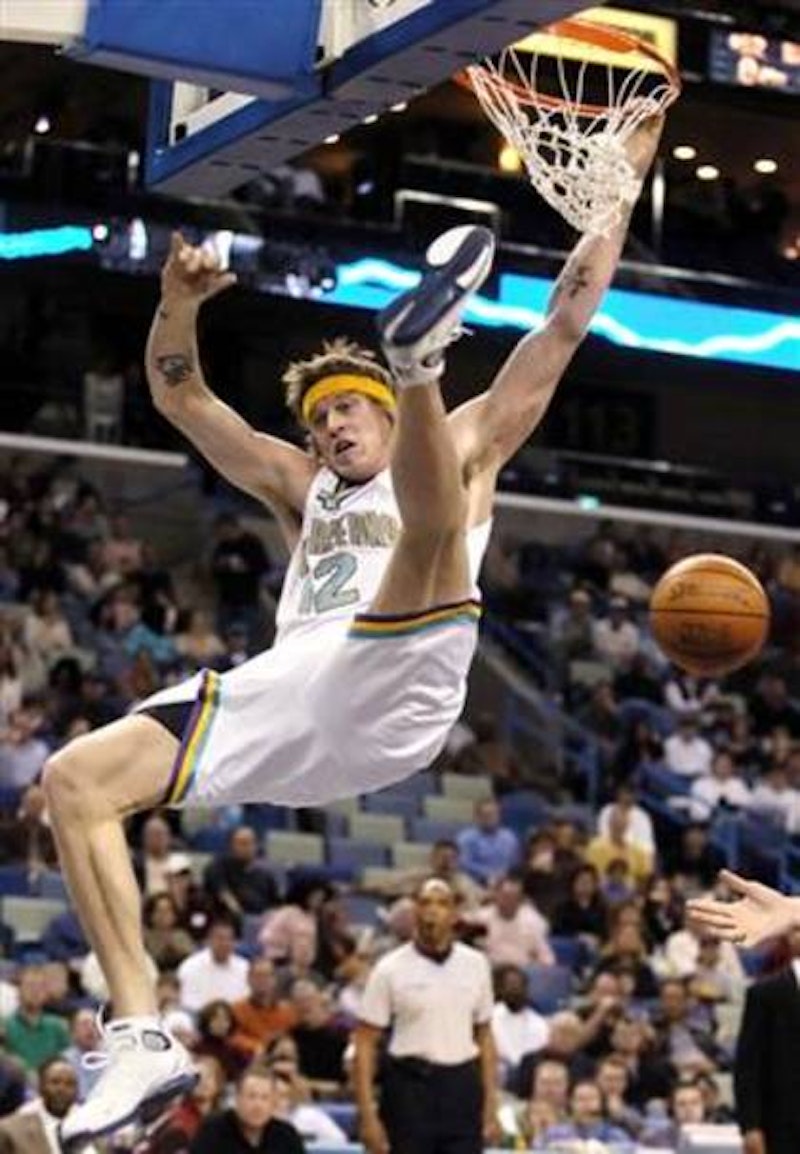 It was just a few short weeks ago that Orlando center Dwight Howard shook the basketball world by donning a Superman getup, taking off from Metairie and delivering a dunk so vicious and obscene it single handedly made the dunk contest relevant for the first time since Michael Jordan battled Dominique Wilkins in 1988. It was a great highlight, that's for sure, but perhaps also a fitting antithesis to the most recent chapter in the rollercoaster story of Chris "Birdman" Anderson. In the last 10 years, there are few more compelling and controversial figures (outside of Kobe Bryant, Allen Iverson and Ron Artest) in the basketball community.

Unlike those three aforementioned all-stars, Anderson is interesting not because of his talent, but rather for his comparative lack thereof. As an undergraduate, the 6-feet 10-inch pogo stick and Long Beach native dropped out of the University of Houston to play Juco ball at Blinn College in Texas. There he showcased uncommon athleticism for a man his size, but NBA scouts weren't exactly lining up to get a glance at the latest Blinn College product.

The Birdman continued to chase his dream by signing with the now defunct Fargo-Moorehead Beez of the IBA. He played well and was the first player selected in NBDL history in 2001. His rare combination of size, tenacity and athleticism earned him a contract with the Denver Nuggets, and in 2004 he joined the Hornets.

However, Anderson still had his share of trials ahead of him. If Howard's performance symbolizes the rebirth of the dunk contest, Anderson's now infamous 2005 effort symbolized its death. The Birdman failed on a total of 13 attempts, drawing open laughter from the crowd and causing an unprecedented number of television sets across the country to turn off completely. This episode would have been laughed off if not for his 2006 violation of the NBA's "drugs of abuse" policy. For this violation he was given a two-year ban. Although the drug was undisclosed, it was rumored to have been methamphetamine.

Why am I recounting this sad story to you now? For all you math majors out there, 2006 was exactly two years ago. Last Tuesday the Birdman was officially reinstated, and Wednesday he was resigned by the Hornets. Reportedly sober since the violation, Anderson is, from a basketball perspective, precisely what the Hornets need. As many western conference contenders made moves to bolster their front lines, the Hornets had been content to stay with Ryan Bowen and Hilton Armstrong as Tyson Chandler and David West's backups. Anderson is an immediate upgrade.

More than just because of basketball, however, Anderson belongs in New Orleans. Above all things he is tenacious. He cares deeply about what he is doing. This determination is contrasted only by his occasional debauchery. He has made mistakes. He was embarrassed on a national stage. He is looking for redemption. Does any of this sound familiar?