Whiteness is the standard of beauty in American gay male culture. Do white gay dudes realize it? 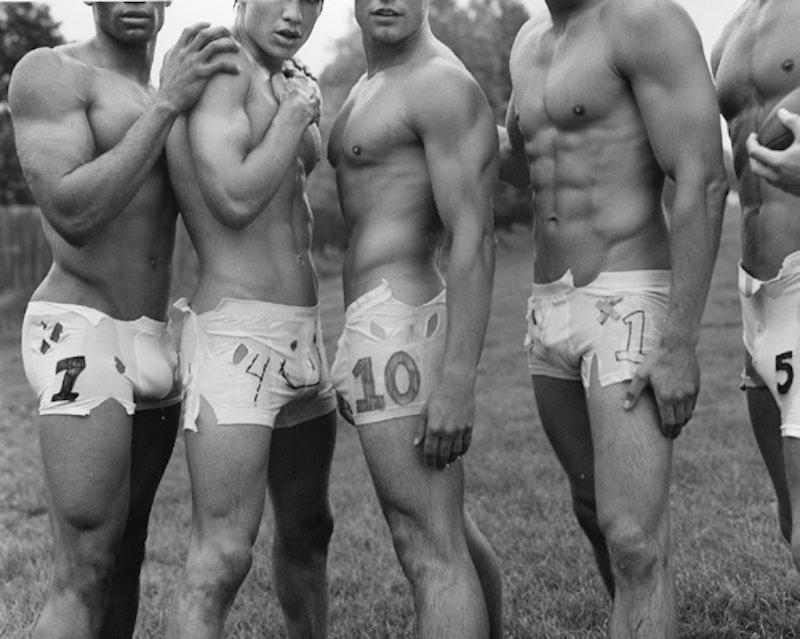 My back was to the subway door and the train was relatively crowded, but not so crowded where you’re nose-to-raised armpit. This cute guy stood in front of me, and as I looked at him in that I’m-checking-you-out-but-I’m-so-not-checking-you-out kind of way, I realized: I really like tall white guys! But not just any white bro—tall, skinny, hipster white guys. To be fair, I do have a range of types that span ethnicities, but if you’re tall, skinny, and a hipster of any ethnic background, call me—maybe.

Guess what? Everybody likes white guys! And it’s problematic. A thirst for tall white guys might seem like the craziest thing in the world to feel conflicted by, but it troubles me for a couple of reasons. First, a lot of my scholarly writing focuses on queer bodies of color and I’m committed to meaningful diversity across cultural forms. So, does this make me a hypocrite? Second, it troubles me because in recognizing that I love white guys I also know that I’m reacting to hundreds of years of being told that whiteness is the only kind of beauty, that black traits should be “lightened” and “corrected” through surgery, chemical hair processes and skin lightening technologies. But the reason it troubles me most is because, in a backwards kind of way, whiteness is the standard of beauty in American gay male culture, and sometimes I wonder if white gay dudes even realize it.

You can see the Nazi-like gay male obsession with whiteness if you look at gay porn, specifically things produced by Sean Cody or anything that’s about “twinks”; Bruce Weber’s fairly homoerotic black and white images of bros frolicking around in Abercrombie and Fitch catalogues; profiles from a number of social networking sites, including Manhunt and Grindr that regularly specify “No Blacks” or “I’m only into other white guys, sorry” and then justify themselves by saying it’s merely a “preference”; the fact that top gay male personalities seem to only ever date other white guys, perhaps a Brazilian if they’re feeling ethnic; and the gay characters on television shows are almost always lily white.

In fact, there’s a fabulous new gay web series called The Outs produced by Adam Goldman that’s about gay dudes, life, and relationships in Brooklyn. There are three episodes of the show, but just from watching those very short minutes you can tell the production level is high and the writing is strong, funny, and overall it’s an amazing effort. The catch? There are as yet no people of color of substance on the show. That’s not so troubling if you think, like on Lena Dunham’s "Girls", that the show is about a very niche world. And it is—it’s about gay Brooklyn hipsters and their friends, and maybe it’s hard to find gay hipsters of color (I doubt it). The problem I have with the snow blindness is that it just rehearses the silent yet highly visible notion that many white gay men are blind to issues of race and are primarily interested in having orgies of whiteness with their kindred bros.

Now before you come for me, saying, “You’re delusional and taking this way too seriously, hunaaai,” consider this. Dating websites have done extensive research into what kinds of person respond to which type of profiles. OKCupid, for instance, did a study on how people receive messages based on their race. The findings reveal that not only do white gay guys receive the highest response rates but also that they respond the least to different ethnic backgrounds. For instance, white gay males on OKCupid respond to 35 percent of the messages they receive from Asian gay males compared to just 32 percent of the messages they get from black gay guys. Overall, white guys respond the least to messages from twinks and bottoms of color who are looking to get poked. Do you know what this means? It means that all of these snow blind gays are waxing on their SPF Ethnicity so as not to be broached by people of color. This is a kind of white gay privilege.

Why is race an issue in gay relationships? Is dealing with being gay so traumatizing that the only way to deal with the blow of coming out to your family or of living with it is to show that you’re still as close to the “norm” as possible? Mom, I’m gay, but at least my boyfriend is a white boy from Nebraska and not some undocumented immigrant who was brought to this country through no fault of his own!

The fact is that white people are the standard pattern of representation in nearly all of American media, but in the gay community the issue seems to be prodigiously magnified. I was having a conversation with a friend of mine about race among gay men and he was very passionate and aware of the problem. He told me he recognized how some gay bars were organized along racial lines—the black and Latino gays go to this kind of club, all the other bois go to this kind. Recognizing the issue is the first step, sure. But do you know how our conversation ended? He told me that he may not agree with the racial politics of his favorite dance club, and he dislikes the fact that it is not as diverse as he would prefer it to be. But he goes where he goes anyway because he can find what he wants there, I'm told. Translation: I know you colored gays are all marginalized and everything, but I want to get my dick sucked tonight and I’m white, so!
And then I realized that this is actually the most difficult part of talking about race—the mental versus the carnal. Most people can agree on the politics of racism, but how do you translate the ideology of being against racism into real action?
So, Happy Gay Pride, everybody!