Quit Making Out On The Bus

You have fifteen seconds to complete your public display of affection. That is all. 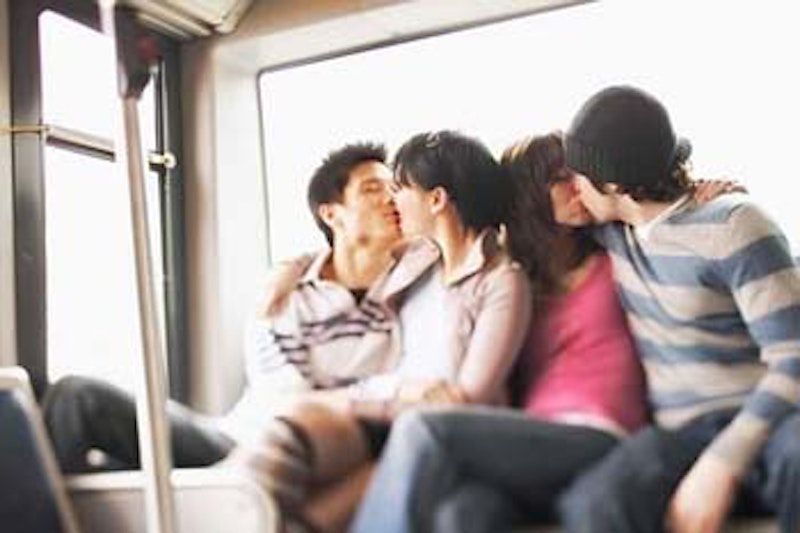 You’re a full three days into a brand new relationship with this guy you’re really into, he’s totes hot. At this stage of your courting you overlook—maybe you don’t see—the little things that in three weeks, three months, a year, will start to bother you. But you don’t zero in on any of that now. You’re just glad to be strolling down Bedford Ave. on a Saturday evening, hand-in-ass-pocket with your summer boyfriend. He holds you close, and you allow it. The Summer Boy has black hair, hazel eyes, and he sometimes wears a septum piercing—which to you makes him really exotic. At this stage of the game you still care about how you look, so you wear a tan, cropped bandeau top, a black mini-skirt, belly piercing fully out, and sky-high heels that turn your legs into skyscrapers. Hand-in-hand, you get on the B62 bus at Bedford Ave. and, though it’s crowded as it always is, you manage to find two seats together. As soon you sit down people start to hover over you. Almost immediately Summer Boy pulls your head towards his and you kiss, but it is not a brief kiss. He’s voraciously eating your face, maybe as a preview to something else, who knows. He pulls your blond hair a little. He puts the arc of his thumb and index finger behind your neck. He massages. You keep your hand on his shoulder, poking his tongue with yours, stopping only to nibble on his nose. “Don’t you know what I’m going to do to you later” smiles are exchanged. With little interruption, you do this as the bus coasts down Bedford Avenue, past McCarren Park, down Manhattan Avenue, then down the length of India Str., across the Kosciuszko Bridge, finally coming up for air, Rudolph noses both, as the bus pulls in front of P.S.1.

Annoyed, I take out my cell phone and Tweet about how annoying it is when people’s tongues get beside themselves in public, but I don’t take a TwitPic. I say something I don’t remember like “I guess the B62 is the best time and place to show a girl you’re really into her.” 75 people “like” my post; 10 people leave comments.

People who voraciously face eat and grope in public places get on other people’s nerves. Public displays of affection are fine, but as soon as you start doing it, you have up to 15 seconds before the make out pass expires. After that, people start to get really uncomfortable. They start thinking, Hey, take it to the bedroom. You’re reminding them they’re single. You’re reminding them their girl/boyfriend recently broke up with them. You’re proof that they’re not having sex. You’re encouraging them to grab the cutest person and start making out. If one person yawns, somebody else yawns. Cause and effect. Maybe if one person makes out, everybody else will start making out.

PDA is fine, everyone, but for those of you who insist on deep make out sessions, keep it within the right context. Don’t do it on the bus, on line at Starbucks, walking down the sidewalk, pinned up against the Whole Foods in Union Square, in the elevator, or at a book signing unless it is a gay kiss and you are specifically standing outside of Michele Bachmann’s house.