Cartoonist Chester Brown tells about being a john in his new graphic novel, Paying for It. 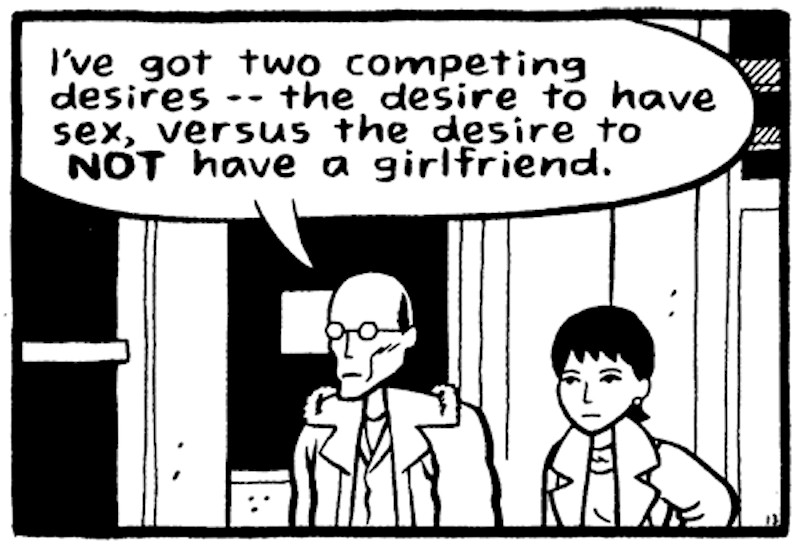 Pay for sex and you’ve got a secret for life. Unless you're Chester Brown, the alt-cartoonist who helped launch the autobio comics genre more than 20 years ago. He’s produced a manifesto/memoir, and Brown and his bald head and skinny bedroom shoulders are in the middle of the action. Paying for It: A Comic-Strip Memoir About Being a John (Drawn & Quarterly, 2011) is his first-hand account of transitioning from girlfriends to paid sex as he entered middle age. To say the book’s odd would be an understatement, to say it’s interesting would be a stretch. But it is worthwhile, and if you see it in a bookstore you should sit down and take a look.

For a man with his fly open, Brown is circumspect. We get the whole deal about him, a bare-knees-and-underwear self-portrait in which he lets on that he’s nothing special as a lover. (“I wish all my clients were like you,” says a girl who doesn’t like big penises.) The women get different treatment. He doesn’t want to blow their cover, and the choice does him credit, but the book suffers. The girls’ faces are hidden away by word balloons or lamps or swaths of hair, and we’re told the bare minimum about their lives and personalities. Among other things, this means we don’t get the story behind Brown’s surprising choice to settle down with one prostitute. Brown continues to pay her, but for years now the two have seen only each other. It’s an odd, stub-like variant of a committed union, and we learn next to nothing about the parties’ motives or how they hit on their deal. The arrangement just drops into view and Brown wraps up his story.

More than anything, his book is the story of a habit. Brown goes from diary entry to diary entry, faithfully transcribing what he did and the thoughts that came into his head (from his first time: “Maybe I should at least take off my shoes” and “Does this count as part of my half-hour?”). These moments, strung together, would make a fine essay about sex dislocated from love and desire, sex as it looks standing free of the assumptions we usually stick behind it. But Paying is also a manifesto, so a good essay has swollen into a dull book.

Brown, an earnest Libertarian, has some big thoughts about prostitution. He thinks it’s good for just about everyone, and that society ought to have a lot less marriage (“Marriage is evil”) and a lot more renting of genitals. Love, he figures, is a chimera, a deluxe version of trying to hit your swimsuit weight. Office mates and gym acquaintances should just pencil in encounters at agreeable prices and leave things at that. Brown figures that this casual, no-friction sort of contact would take care of any need people feel for sex partners or soul mates. What about the production and raising of children? He has that covered: “People would still want to have children, and most parents would love their children, just as most parents do now.” How kids get raised can take care of itself; the important thing is to figure out how singles can fuck other singles. This choice may say something about the alt comics demographic.

Paying includes 50 pages of appendices and endnotes, but they don’t add up to much. Brown’s research and backing arguments are casual. He’s at the level of I-read-a-book and there’s-this-culture-somewhere. The culture in question is the Moso, who come to 40,000 people living in the Himalayas, and the book is Love in the Western World by Denis de Rougemont. Nothing against Rougemont, but Brown pins the entire historical side of his argument to that one source. Sections of Paying are given over to Brown’s discussion of weighty topics with his friends. These are bull sessions. As a friend confesses in the endnotes, he doesn’t know anything about prostitution and hasn’t thought much about the subject. For his part, Brown takes the line that avoiding bad things (like jealousy and recrimination) must be good, and that key facts can be waved into existence. Do married couples lose interest in sex? Sure—“Any husband can tell you.”

Faults aside, Paying for It is a superior book to look at. Brown is a craftsman, and in Paying he displays a particular style developed for this work alone. Figures are lined up tightly in a way that Brown takes from Fletcher Hanks, a bizarre but gifted artistic primitive who put together some of the strangest superhero pages ever seen. Hanks combined ham handed layout and composition with bursts of inventiveness that could make panels seem to float. It throws you off balance to see someone so bad and so good.

The people he drew looked like gargoyles but also very much like individual, fully imagined human beings, and they were parked in view with shoulders overlapping and their faces floating above. Paying reconfigures the gargoyle lineups into trim horizontal motifs that bring a page to life. The faces are less grotesque here and more stylized, simplified in a high-style way that meshes with the book’s background use of rhythmic skylines and starkly arranged phone booth doors. Alt comics are accused of looking dull, and Paying does seem inhospitable at first. But the book has its own brand of visual jazziness. The pages tick along, their understated effects bouncing off each other and the recurring eight-panel page grid that sets them off.

The pictures lay out Brown’s story in a sure-handed, quiet way that falters just once. Brown has managed his first for-hire encounter, and now he rides off on his bike. “A burden that I had been carrying since adolescence had disappeared,” he writes. What burden? After all, it could be a few different things. An ex-girlfriend couldn’t tell either, so Brown explains with an endnote. As it turns out, a few hundred words are needed to get his feelings across, but they come down to this. He’s shy, so he used to worry about whether he’d get laid. Now, thanks to money, he need worry no longer: “Instead I was looking forward to a future of sexual satisfaction.”

Brown says this after telling us how he’d kick himself for messing up opportunities with various cute girls. Some people, maybe most people, would kick themselves because they’d want to be the sort of person who draws others to them, who’s cute, daring, sensitive or some other adjective that promises a bit more oomph in life. For a lot of us sex is mixed up with desire, and desire sticks its nose into every corner of existence. That’s a big part of what makes sex worthwhile to us. The amazing thing isn’t that Brown feels differently, since people have their different approaches to life. What’s amazing is that he has no idea how the rest of us feel.