No Gays for You

Come December 10, be prepared for a less fabulous work force. 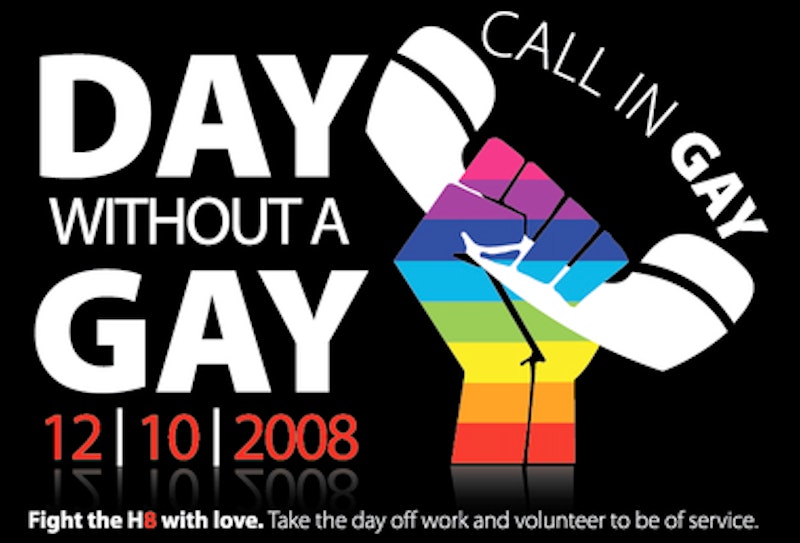 I warned you bitches that The Gays and Dykons of America, LLC, would get pissed the hell off if Prop 8 passed. Well, the shit done hit the fan. I got an email today from my school about this nationwide campaign for all of America’s gays and gay hags to call in “gay” from work on December 10th. Day Without a Gay is what the national protest is called. Leave it to an angry gay to fuck the system up!

OOPS! Can’t get your hair did.

Nope, no oil change for you.

Prepare for reruns of The Ellen Degeneres Show and Color Splash! with David Bromstad.

Your favorite celebrity is gon look a hot-ass mess ‘cause ain’t gon be no stylists or make-up artists!!!

You know, I’m very Warholian in my approach to things like protests. I like a good one and I love it when people get pissed off about issues they care about. But I don’t want to be in them. I’m too superficial to like be seen protesting and stuff. I mean, what do you wear to a protest? But I have to say that I am so into this Day Without a Gay. I mean, it’s not that I have some ultra-important job that I could stay home from or anything. I’m just a grad student, which means that I can stay home whenever I feel like it. So instead of taking off from my non-existent job, maybe I’ll just, like, learn the dance to “Single Ladies” or, um, watch Sex and the City.

I like the Day Without Gays idea because I think that there’s nothing sexier than a little chaos, at least every once in a while. You have to fuck shit up and make people angry before there is any real progress. Nobody listens to anybody else unless they’re screaming at the top of their lungs. I once heard this famous academic tell an audience that she liked to “fuck shit up, stand back and watch what happens.” No really, that’s exactly what she said. And it’s just what The Gays and Dykons of America are going to do. If there has been any progress towards gay rights at all, it’s due in large part to crazy protests and parades, sit-ins and kiss-ins and cock-outs and so on and so forth.

You gotta fuck the system in its ass!!!

I honestly thought that Prop 8 would fail, especially after my own state of Connecticut started allowing gay marriages. I mean, San Francisco has got to be like 200% gay from what I know; and Hollywood must be filled to the brim with a lot of gay, even if they’re closeted.

I guess that’s why folks have widely blamed black people and the religious right—especially Mormons—for Prop 8. Reliably, angry black people pushed back, saying that it’s racist that “white gays” blame the black community. While we will never know who was responsible for Prop 8 because so many different groups have red hands, I hope that Prop 8 served as a wake-up call to gay blacks and gay black hags alike.           Black Americans are still among the most homophobic groups out there, and are highly likely to vote against any pro-gay measure. That’s the reality, and I get extremely annoyed when people try to deny it for the sake of political correctness. Instead of trying to be all P.C., the black community needs to figure out how to deal with homosexuality and own up to the fact that homophobia is a real issue for lots of black people.

And don’t get me started on them Mormons. When I first heard how deeply involved the Morons were with financing the bullshit ballot, I sent the following text message to my cousin who recently converted to Moronism :

But I don’t hold her Moronisim against her or anything mean like that. She’s a diva and I know she loves A Gay. I just think she has a fetish for pairs of hot white guys dressed in white shirts and black ties and slacks who show up at your door unannounced. And for that I don’t blame her, okay!!!!

But the quite ironic thing to me is that the issue of gay marriage has become—and needs to remain—more of a mainstream issue. Lots of people were upset and confused by the passage of Prop 8.  And the more vocal straight people from all races, religions and backgrounds are in support of gay marriage, the more traction it will gain as a serious civil rights issue. When The Straights start to look up and say, “hold up: gays should be able to marry, too” that’s when you know we’re on the right track.

So even though a Day Without Gays is sure to be a fugly one, I hope that all supporters of gay marriage realize that the gayless day won’t be nearly as successful as one where bitchloads of gays and breeders across the country stayed home from work. Hey Breeders: Take a vay-cay for The Gay! That’ll send a message to your boss. Because at the end of the day, gay marriage is no longer a gay issue. It’s like, um, civil rights.