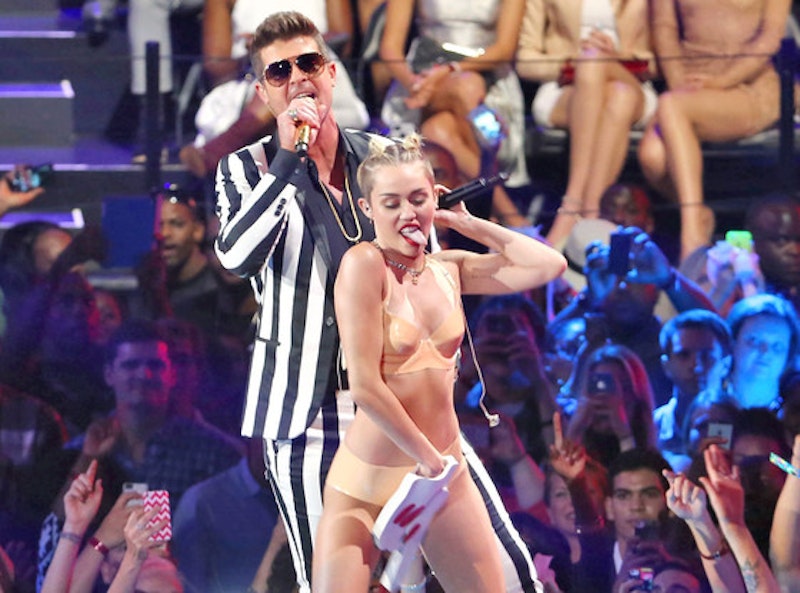 Another awards show, another few days of faux-outrage over some hyper-sexualized performance: this time it's Miley Cyrus at Sunday night's VMAs, "twerking" in a "nude" bikini, tongue out like Gene Simmons, play-fingering herself with one of those giant foam #1 hands they give away at football games. "How did we get here?" USA Today asked after Cyrus, apparently unconcerned by the controversy, posted "racy" photos of herself in workout clothes and a sports bikini to Twitter. I'm sure I could half-ass some answer about post-Madonna pop and how we all know that "sex sells" but the basic fact is we're here because this is what we do to teen pop stars now: we use them up, very publicly.

Remember Britney? The paparazzi harassing her after her 55-hour marriage, her rehab stint, her shaved head, her court hearings; an aging idol—the personification of girl-next-door innocence—drugged out and suicidal. You could read all about it in The National Enquirer and a dozen other tabloids. "How did we get here?" Because tabloids still sell.

This is not to suggest that Miley is the new Britney, only that Miley's VMA performance is fundamentally no different from Britney's way back in 2000, when the Teen Queen wore a glittery "nude" bra and pants suit combo for her "Oops!… I Did It Again" performance. Julie Miller wrote about this for Vanity Fair on Monday, but suggested that, because Britney's dance looked more professionally choreographed, and because her bra sparkled, we should all be nostalgic for a gentler sort of corporate exploitation.

But this is just Stage 2 for Miley's career: Disney princess turned pop slut, which is what we all want anyway. All that twerking surely didn't shock Miley's managers (or any VMA executives), because performances like this are planned and rehearsed months in advance; they're about controversy, publicity. Never mind that it's all been done before, or that, like Janet Jackson's "wardrobe malfunction," it's all totally manufactured, we can always count on the concerned media to cry, "Won't someone please think of the children!" Because, yes, sex sells.

So does moral panic.