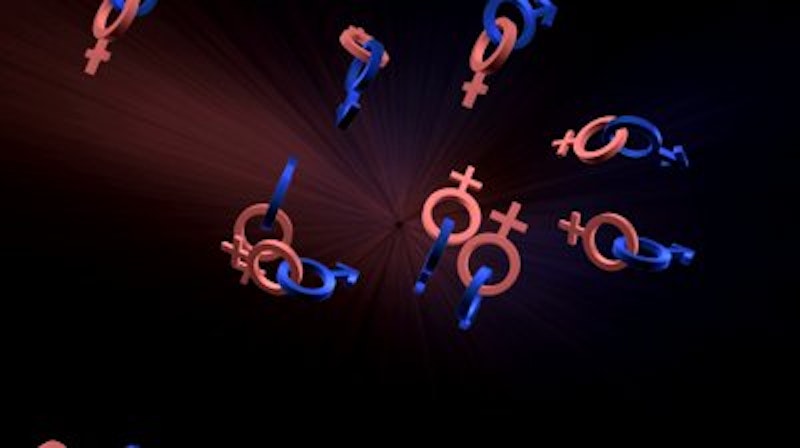 Feminism is about women. But it has also always been about men. In fact, in some ways you could say that one of the main things that feminism has done is to create men, or to make men visible, as a class or a group. For a long time, men were an invisible default; only women existed as a mystery or an aberration to be questioned, quantified, and controlled. It took feminism to see men as acting out a gendered script, and as behaving, specifically, as men, in the interest of men. Feminism makes men, not a default or an inevitability, but a question and a problem.

It shouldn't be a surprise, then, that one of the most contentious issues in feminism at the moment revolves as much around men, and the idea of men, as around the idea of women. That issue is transsexuality, and the place of trans people, and particularly of trans women, within feminism. On the one hand, many feminists (including trans women themselves) argue that they are women, and that feminism, to be true to itself, must, therefore, include them. On the other hand, some feminists (especially some radical feminists) argue that trans women are not women, and that they harm feminism and women by claiming that they are.

I'm firmly on the side of trans women here: as Samantha Allen says in a recent post on Salon, "It takes a particularly twisted calculus to value the politics of representation over the lives of the vulnerable." I do think that it's worth looking at how that calculus works, and at why untangling it requires a reassessment not only of feminism's relationship to women, but of its relationship to men.

In a post on Counterpunch, radical feminist Elizabeth Hungerford offers an unusually clear account of why she rejects the equation of gay identity with transgender identity—an argument which amounts to an explanation as to why feminists should support gay equality, but not trans equality.

"Heterosexual coupling requires both sexes by definition. “Straight privilege” therefore accrues to both men and women equally. “Cisgender privilege,” on the other hand, is a misnomer. Gender-conforming males are rewarded for masculine conformity. Masculine men are never oppressed on the basis of gender; or to say it another way: “cisgender” men are never oppressed on the basis of gender. The same does not hold true for women; it is the opposite. Women’s gender conformity does not protect us from oppression on the basis of gender. “Cisgendered” women are still routinely targeted for sexist treatment, harassment, and discrimination. The concept of “cisgender privilege” falsely posits men and women as social equals in regard to gendered oppression. It is an inaccurate explanation of how gender norms operate as a sex-based social hierarchy that devalues women. Talking about “cisgender privilege” simply does not make sense in the context of women’s relationship to gender and oppression."

There are several problems with this formulation. One of the most pernicious is that, in saying that the only victims are women, Hungerford slides towards a position in which women are only victims. That is, "woman" comes to mean "victim," and women's identity becomes solely based on victimization.

Thus, the antipathy some radical feminists express for femininity. Hungerford states this antipathy relatively calmly ("stereotypical femininity is regarded by many feminists as a harmful social construct that no person should adopt, perform, celebrate, or identify with.") But Julian Vigo is much more visceral, boasting about her inability to finish a Danielle Steele novel ("too much unadulterated 'feminine'!") and sneering at trans women on the Pink Essence website who give each other tips on trying to appear more feminine. "‘When you take your cup of tea or coffee, take it slowly and delicately with the ends of three fingers. Don’t grab it tightly with all your wrist as men shake their hands. It looks very malish.’”, Vigo quotes, and you can all but hear the sing-song, schoolyard taunt in her tone. Femininity is the mark of the oppressor; it’s artificial, frivolous and weakness. How can it be anything else, when the essence of woman is victimization, and the essence of victimization is women?

Radical feminism's great insight is that women's oppression is one of the foundational truths of our society, and that feminism is not just mucking around on the edges, but a sweeping assault on every aspect of society. "If there were another word more all-embracing than revolution we would use it," Shulamith Firestone declared.

The insight remains valid… but in asserting the foundational importance of gender hierarchy, radical feminists can at times erase, or refuse to see, other forms of oppression. Gendered oppression goes from hugely, foundationally important, to solely important. Radical feminists often say that they oppose the inclusion of trans women because trans women reify gender, or deny biological fact, or (at worst) are duplicitous quasi-rapists bent on invading women's spaces. But in Hungerford's essay, and in general, the real issue seems to be much simpler. It is the fear that, in accepting trans women as sisters, feminists will have to acknowledge that men in some situations, face gendered oppression too.

Radical feminists should acknowledge this because it is true. Men do face gendered oppression. As scholar Adam Jones has pointed out, men and boys in Kurdistan, in Yugoslavia, and throughout history have been slaughtered in root and branch genocides specifically because they were male. Gay men, not in all times and places but in some, have faced less tolerance and more violence than lesbians. If Trayvon Martin had been a woman, he would probably be alive now. Black men are targeted in our society not for being too feminine, but because they are perceived as hyper-masculine and violent. And trans women, who are not men, nonetheless face discrimination because they are perceived as males, whose entry into women's spaces is a danger and a violation.

Recognizing gendered discrimination against men is not a betrayal of feminism. Feminism is only strengthened when it is wielded on behalf of anyone who is persecuted. And women, and all those of whatever gender who identify with femininity, are only strengthened when they are not defined solely by their victimization. Trans women don't make nonsense of feminism; on the contrary, they show that feminism only makes more sense the more sisters it welcomes.