Not to mention closet case. 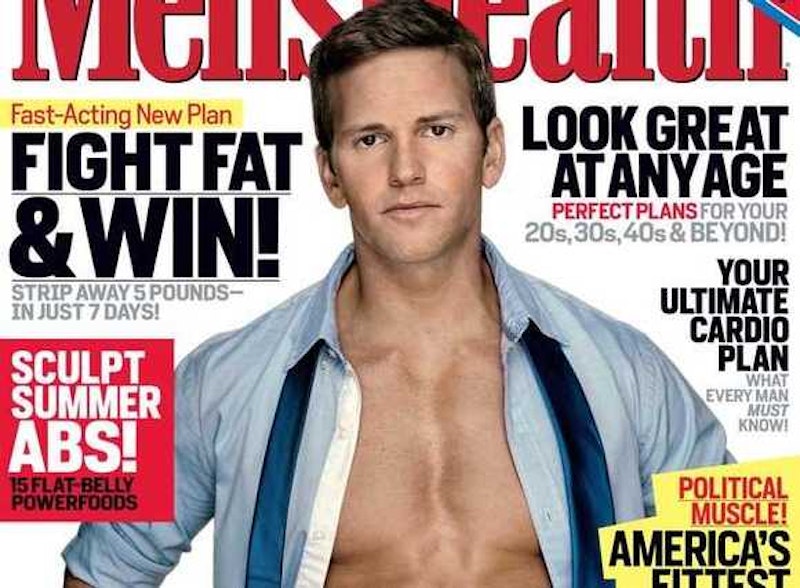 And in today’s Closeted Politicians News Cycle, word broke about the very oiled-up and delicious looking Republican Congressman Aaron Schock traipsing around the June 2011 issue of Men’s Health magazine. I guess some Republicans really do know how to have fun! The special issue is meant to get fat people to stop being so damn fat, encouraging Fat Americans to drop a few extra pounds and to start eating healthier.

That’s very nice and everything, but first off: what… a RILF. Second, does anybody else notice something especially interesting about these photos? Every time I look at him, with his perfect abs, square jaw, and delicious legs, I keep thinking, “Well, there’s only a matter of time before HIS gay sex scandal comes out.” You can’t get abs like that unless you’re having a lot of gay sex, people. Then I read over on Queerty that, reportedly, dude “regularly brings boyfriends to fundraisers and is a self-loathing closet case with anti-gay politics.”

But according to a New York Times profile of Schock, he describes himself as a “Christian” and is not interested in any “social issues”—obviously. He’s vehemently anti-gay marriage, and has repeatedly had to tell reporters that he is not gay. Come on, Schock. Don’t you get it? It’s not the photos that make you look gay, photos that basically look like every Manhunt profile pic I’ve ever seen. It’s the being so against gay stuff. When will all these closeted politicians learn? How many conservative, anti-gay politicians have to get publically humiliated cruising for cock on Craigslist? How many have to get busted tapping their foot on bathroom floors in search of illicit peen before they realize that nobody’s buying it!

I bet Schock’s Manhunt screenname—and I’m speaking hypothetically!—is something like HUNG4FUNINDC1981 (his birth year). The profile pic is headless, and he filled out his profile with some variation of “Fit, Masc, Discrete DC Professional, Total Top, seeking white twink under 18-24 years old ONLY. NOT INTO BLACK GUYS—I’m not racist, it’s just a preference.”