Ain't Too Proud To Beg

On “Touch It,” Pusha T and Kanye West are ready for their orals. 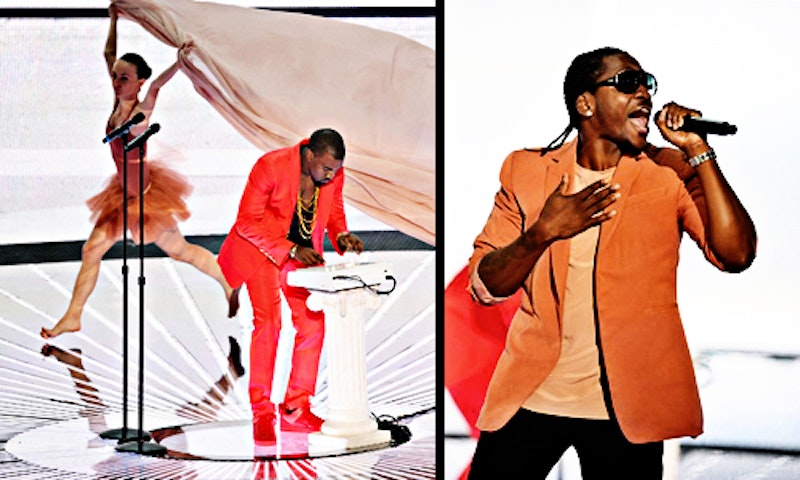 Hip-hop has a rich, vibrant fascination with head—so rich and vibrant, in fact, that attempting to catalogue rap songs that offhandedly reference or celebrate the experience of getting dome is fruitless. Less bountiful are bangers that double as specific, pointed requests for brane-on-demand. There are probably a lot of reasons for this, not least of which: rap is a genre built in large part on boundless bravado, arrogance and confidence, so in order to ensure the onset of future head, it’s important to offer the impression that it’s not difficult to acquire head right now and that it wasn’t difficult to secure in the past. So either gentlemen don’t talk about head, or they brag shamelessly about head, or they simply do not speak of head; outside of, say, Cam’ron’s “Suck It Or Not”—and a few similar plaints whose titles and authors escape me now—gentlemen do not beg for it.

In the wake of the sullenly passive-aggressive “Suck It Or Not,” the listener came away with the sense that Cam wasn’t desperate, but, rather, a narcissistic cad, that if the answer was ultimately “not,” if the subject to whom the song was addressed was not willing to put out, Cam would casually consult his Rolodex on his way to ushering his fuming date to the bus stop.

On “Touch It,” though—where Pusha T and Kanye West find themselves similarly primed and lacking the means for a hand-free launch—the protagonists’ desperation is deeply embarrassing for performers and audience alike. Deeply embarrassing in different, equally awkward ways that are unbecoming of big-time ballers or shot-callers.

There is nothing satisfying or revealing or transcendent about listening to rappers beg for blow jobs, about a flustered, tantrum-throwing West huffing and puffing away on the choruses while Pusha peppers his not-so-coy bloviation with metaphors too corny to transcribe here. It’s impossible to listen to “Touch It” without imagining a variation on the Lonely Island’s “Mother Lover” or “Dick In A Box” videos, or the scenes in Fargo where Steve Buscemi and Peter Stormare take up with blonde, Nordic prostitutes; the song is that tragicomic, that pathetic. Because, well, if you’re a girl who doesn’t want to go down on rappers, is one whining like a baby or the other babbling like he’s in a recording booth really going to encourage you to go down? Or would it just kill the mood, the buzz, the urge to do anything else or talk about art or politics or how much Bugatti that took you to the hotel went for at retail? Sure, if you’re a groupie, it makes for a great story to dine out on, but honestly, ask yourself which is worse: enduring the hard-up pantings of horny sub-emo dudes or getting dropped off at 7-11 by the hardheaded douchebag who’s already cold booty-calling a sure thing? In the latter scenario, at least she could make something of the rest of her evening—crash an after party, sneak into a VIP area, make a booty-call of her own—instead of managing the neuroses of immature boy-men.