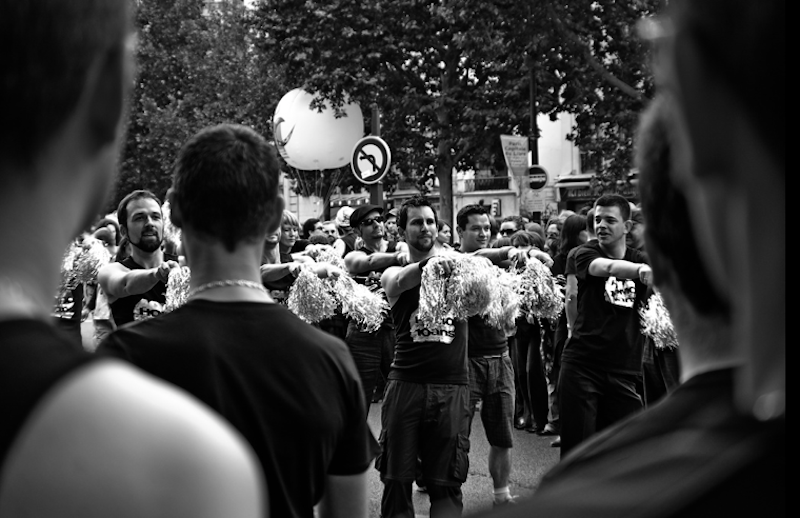 Last night I was walking up 6th Ave. in the Village, listening to dat new Mykki Blanco, when I got to the corner of 6th and W. 4th St. and was brought to tears of anger. A crowd of about 30 people, most of them passersby, gathered to honor Mark Carson, a gay man who was recently shot dead in an act of homophobic violence, right in the heart of the Village. There were candles, flowers, posters and photos placed at the foot of the empty Barnes and Noble storefront—a stone’s throw from the Stonewall Inn, which launched the modern gay civil rights movement in 1969.

“Look at you faggots, you look like gay wrestlers,” Elliot Morales allegedly told the pair before he shot Carson in the head. There is no place that is free of homophobic violence. France has seen a rise in anti-gay violence in light of the country’s recent passage of gay marriage and adoption rights, set to take place this June. But in New York City alone, just in the month of May, weeks before gay pride festival season kicks off, there have been more anti-gay attacks than ever before: a man making anti-gay remarks and attacking a woman with a ketchup bottle; a report of a gay bashing outside a Midtown subway station; and the much-publicized bashing of two men who got jumped by Knicks fans outside of Madison Square Garden.

Anti-gay violence makes me angry because I can’t understand why anyone could disagree so wholeheartedly and so passionately with your life, which has nothing to do with anybody else, that they must cause you physical harm. Beat you up. Shoot you.

What is wrong with people?

As a gay man with a certain effervescent sense of style, I’ve had my share of homophobic verbal violence. I’ve been called faggot more times than I can count. I’ve been laughed at when I walked past a group of men who didn’t like the look I was serving. I’ve even felt homophobia from within the gay community, which praises uncompromised masculinity. Any gay dude will tell you the first question they get asked on Grindr, Jack’d or the social networking place of their choice is, “U masc?” or some variation of that.

In some way the question is valid. In the straight mind, to borrow the term from the fabulous feminist theorist Monique Wittig, being masculine means not announcing your gayness. It means “passing” as heterosexual—that unreal, intangible, unavailable trait that doesn’t even really exist as a “thing"—and yet which still remains fetishized by gay males and governs a great majority of our social transactions. To be “masc” is a way of assuring the straight world of your manliness and maybe even of your normalcy, sure. But in a twisted way it’s also a protection against the kinds of homophobic violence that people who dare to step out of the norm can enlist to ensure they go unperceived. That’s the benefit of passing.

I’m so sick of gay people getting beat up. Seriously, people. You’re entitled to your own opinion, but you are not entitled to our bodies. I might snicker at you, but I don’t run around snatching people’s tracks out of their heads when I don’t like the way their weave is glued in. In virtually no instance of homophobic violence do we hear about the straight aggressor getting their ass whooped by the gay guy. Thank God I have so far not been in that kind of situation and I can’t speak for how I might react in that frightful moment. But I am angry. When people call me faggot, I feel angry. I never say anything, preferring to mind my own business and let them be ratchet. But there are times when I’ve wanted to speak back, but I didn’t because that only invites the danger, and nobody knows what they’re carrying.

Gays need to start fighting back. I say this as someone who doesn’t really know how to fight, who wouldn’t even know what to do. But do you even need to know how if your survival instinct kicks in? Even if we can’t fight, we should carry Tasers or some other self-defense product so we can teach these straight aggressors a lesson. I don’t want to advocate unbridled violence, especially not in light of the recent school shootings. But I do advocate stern self-defense.

In addition to organizing tolerance marches and protests and writing columns like this one, gays need to practice critical self-defense. Can you imagine what would happen if instead of gay men and women getting beat up we started whooping straight ass? What if those stories started making national news?