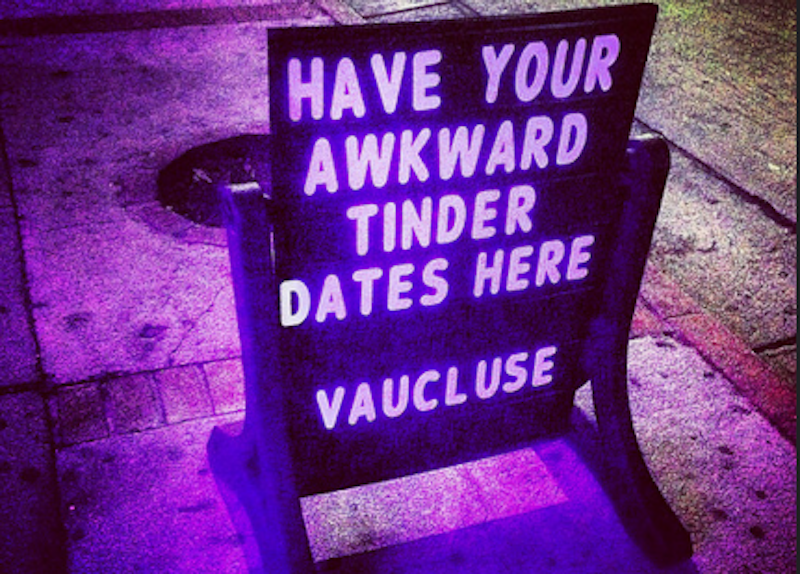 I’ve been single since August and I’m not eager to get back into a relationship again for a long time. Who knows what kinds of tall, hot hipster Guattari-reading art nerds with skateboards and tattoos I’ll meet in the future, but for now I’m really enjoying the single life. I like doing what I want, going where I want when I want, hanging out with my friends and focusing primarily on my art. Being in a relationship is amazing, but so is being single.

That’s not to say I haven’t been on dates. I’m definitely on all the apps. It’s so exhausting. And like a lot of gay dudes my age I’ve been swiping right and left, blocking and unlocking, favoriting and “hey”-ing. There’s even a really amazing new restaurant that just opened up near where I live that would be a fabulous place to take a guy I was really interested in. But this guy has yet to reveal himself so I’m saving it until he pops into my life.

The worst thing about dating again after being with someone for a long time, especially if you were happy before things went south, is that you realize lots of people are actually terrible humans. Not like bad people, its just you meet them for coffee and you’re like… wow… well that was fun gotta go! You forget that settling into a relationship with someone means that subconsciously you have decided they’re compatible with you on a number of levels—sexually, emotionally, intellectually. You get each other’s jokes and even make your own inside jokes together. They fuck your brain as much as your body.

When I felt ready to date people again I met a mega hot French guy from Tinder who I couldn’t believe I matched with. Honestly I went on the date just to see what would happen. Well, absolutely nothing happened. He was an investment banker—A RED FLAG—but I didn’t have any judgments against him. I was sort of into him actually until I told him I lived in East London and he said the stupidest thing that has ever been heard on a date. “Oh, I’ve been to Bethnal Green before,” an area that’s about a 20-minute walk from my house. “I don’t like it there. Too many Muslims.”

“I mean, I’m not racist, they just make me uncomfortable,” he clarified, like I didn’t hear him the first time.

I couldn’t believe I was on date with a guy who was telling me, a black guy, that he didn’t like Muslims because they made him uncomfortable. Girl wut? What kind of person says something like that to an ethnic minority on a first date? A complete asshole, that’s who. This was someone who couldn’t even be bothered to hide his feelings, who didn’t care enough to perform on a first date. No matter how hot you are or how much money you have I can’t date anybody who starts a sentence with “I’m not racist but…” because it means we’re on different pages. An intellectual connection, for me, is probably the most important thing in finding new dudes.

So you go through a lot of bad dates and even bad sex with people before you find the person you get on with most. You wonder why you were getting along so well with this guy but then he up and disappeared into thin air, no reason. Or someone likes you a little bit too much or not enough.

It’s an exhausting process. You forget how time consuming it is because luckily you’ve been with someone for a long time. But that’s why we shouldn’t even look for romantic partners on apps or websites. Apps satisfy our need to be wanted, liked, and to be notified the second we are wanted and liked. The best way to meet someone who is least likely to be a fucktard is to date the way you would if you didn’t’ have access to all the apps. Go to all of your favorite things—galleries, concerts, restaurants, club nights, movies—and meet your guy in person. It doesn’t mean they aren’t racist or something else really stupid, but at least you’ll get a chance to sniff them out some.