The stigma against interracial coupling has got to go, particularly in the gay community. 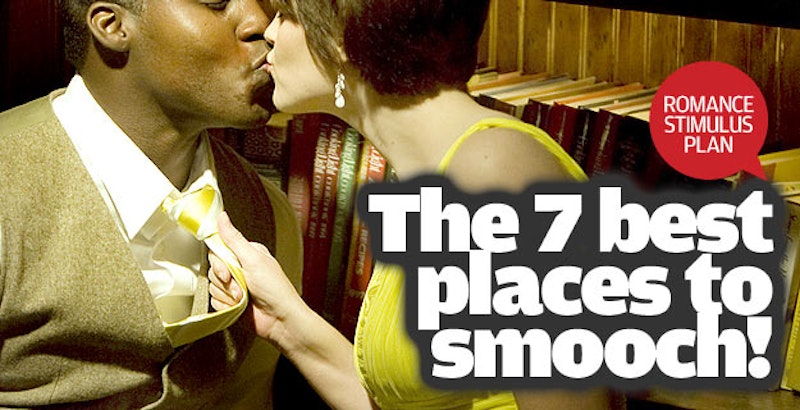 The weekend magazine of the St. Louis Post-Dispatch just did a story about the hottest places to make out in St. Louis, where I used to live. All fine and well, but the cover image of the story featured a hot chocolate daddy and his white girlfriend. This simple image released the Rednecks and sparked a wave of online controversy against interracial coupling. “1buschstadiumplz” comments “Haven’t read the story but don’t like to see blacks and whites kissing.”

“John” upped the ante: “I am supposed to accept that some people choose to have interracial relationships. That is fine with me, do what you want. However, I choose to think it is not something I would expose myself to.”

What is wrong with these people? Sheesh! Okay, so it’s Missouri (Missourah if you’re nasty); some kind of racial bigotry is to be fully expected. That’s why I escaped and reinvented myself into East Coast Glitterati/Intelligentsia.

But no matter where you go, Chicago, Los Angeles or even New York, people are still squeamish about interraciality. Especially gay dudes. When I was single and frequenting such highly respected gay dating sites like DList, I can’t tell you the number of profiles that specified, and I repeat, specified, that the dude was only interested in dating other WHITE guys. Their profiles would just bust out, “Sorry, not into Black men. I’m not racist—it’s just a preference.” And others were a dollop more tasteful: “Into All Types of Men—Asian, Latinos, Whites, Arabs, Spanish, Canadian, Hawaiian, Filipino, Indian”—basically, anybody but a brotha.

Can’t a brotha get some love?

I’m not sure that a lot of people know this, but gay men can be among the most “racist” men out there. The funny thing is that the “racist” gays aren’t like KKK dudes; they often just refuse to sleep with anybody who isn’t white. And while that’s more of a private kind of racism based on personal choice, what annoys me about it is that it holds this kind of barrier between white guys and everyone else fully in tact.

Part of this stems from the fact that the majority of gay culture is really, really white. Hot, white Abercrombie jocks are upheld as the standard of beauty par excellence. Don’t believe me? Go to www.seancody.com or www.dudetubeonline.com and see for yourself. Do you see any ethnic men? The basic point is that if U R not white and hot like the Abercrombie/Sean Cody trannies, you sort of don’t exist in the gay world. This is the story of many hot black gays, who lust after hot white guys or others only to get the door slammed in their faces.

I know it’s really complicated, but if you ask me, when a racist gay says NOT INTO BLACKS it means that he’s not attracted to the fictionalized idea of what black dudes are supposed to be like. You know, the stuff we see on Fox News every night: the thugs, the gold teefs, the hip-hops, the saggy pants, etc. These are the stereotypes of black guys that trump whether or not they are educated, rich, etc. So the really scary thing is not just the stereotype, but that people assume that this is what all black men are like. I wonder if the Rednecks in St. Louis were more annoyed by the local stereotype of black men, or is it the literal mixing of races that they find repugnant?

Monoracial dating—that’s what I call it—is totally boring. White on Latino! Black on Asian! Asian on Arab! Let’s mix that shit up. If you ask me, we’re programmed to be attracted to people within our own race. Many of us grew up in monoracial households, so naturally we get used to that rhythm. But it doesn’t have to be that way. People will retort and say stuff like, “Oh, I’m just attracted to blue eyes.” But that’s a standard of beauty that’s forced down our throats via popular culture.

Folks should be able to find qualities they like in other people, regardless of their race. For instance, I am attracted to types of guys more than anything else. Most of the dudes I find attractive look like they will pass out from a drug overdose at any moment. If he’s tall, skinny, tatted, wearing skinny pants or plays in a band, I’m gonna wanna take his cock out, no matter the race.

I’m not trying to invalidate monoracial relationships, cause those can be really fierce, too! I’m just sick of people being “opposed” to interracial dating. Go try some dark meat. You just might like it.