Cousin Quibbits has a spiritual visitor and resumes his criminal ways to get back where he belongs: home. 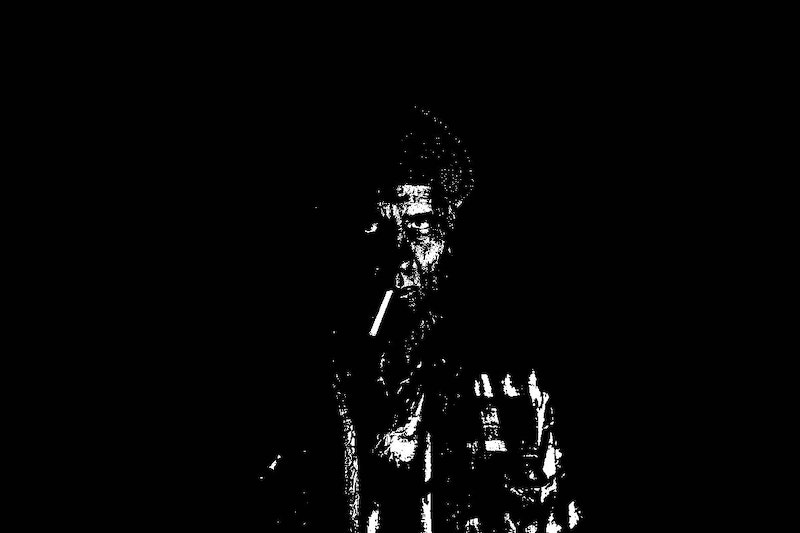 This is Part Nine in a series, Bennington Unchained.

One day, nothing will exist. Until then, I’m Quibbits kin. I had a revelation by the train tracks, all bruised and bloody, ready to die under the moonlight. “Blood moon, they call it,” some guy said to me as I was lying there, bleeding out (presumably). “Lot of people end up in the emergency room during full moons. Blood moons, too. It’s not good. I curse the moon, personally. I think it’s a bad thing, a negative force. I’m surprised no politician has ever suggested attacking the moon, or perhaps bombing it. Landing on it is just so insane to me, just utterly out of this world.”

Then he asked if I had a light and I pointed at the burning train. “Thanks,” he said, and then wandered off. I never saw that man again, a man I saw only from the back: a long black coat covered in dust with black boots that were coming undone, long greasy blond hair, and the most weathered hands I’ve ever seen on a human male that wasn’t already in a hospital or dying in the desert. Maybe I made him up. Maybe he needed me. Maybe he committed suicide. Maybe he just needed a light. Anyway, at the time, as now, I thought, “Not my problem.” Because it isn’t. Not then, either—especially when I was bleeding out.

Well it was just a flesh wound. I found the nearest town, befriended the owner of the local Duncan Donuts franchise, gained her trust, then after five days of love and tender, I spur-clawed her in bed and stole all her money and her phone. I’ve been a bad bird, and I’ll continue on my mission to Hell. I ordered a Lyft from her house—somewhere in Paramus, I think—up to Boston. That didn’t fly, so I was forced to go through New York City again. Ugh. Too many pop-up shops and not enough Yellow Cabs. Feel me? I don’t respect any surroundings that I’m not currently occupying. I stole a truck full of Pepsi (rest stop solicitation aside, I didn’t need to kill the john, I just bit his thing off. Yeah… trying grabbing a rooster like that again without your carotid artery.

Driving a truck is surprisingly easy for a bird like me. I’m strong, I’m fierce, and gosh darnnit, people like me! I’ve gotten such positive feedback from this series that I’m thinking of expanding once I get beyond the 10-point mark. Yay! It’s like we’re all back to school. I’m still vibrating from the speed I stole from the trucker and I’m writing this from the Donut Lady’s phone and having a great time learning about jet propulsion and the French Commune of the 1800s. Honestly? Wig. They had it going on. I’ve never smoked this many cigarettes in my life and I’ve never had a highway gas station employee shame me during my purchase of 100 cartons of Marlboro Reds. Look—I have to work! So what if I have to smoke 300 cigarettes a day? I’m a genius—clearly!

I’ve realized during my sojourn that my family is the only thing I have. It’s not what means most to me, or what brings me most joy, or what fills my life with positive emotions. No: it’s a torture, but it’s one I must endure unto death in order to keep my loved ones comfortable and happy and abreast of my own well-being. Because I can’t hurt myself or die under any circumstances lest Rooster or Monica be affected by it in any way. I don’t care what anyone else thinks. I only care about them. There are only three birds in the world: Rooster, Monica (bitch), and me, Bennington Quibbits.

Storm clouds are chasing me now, and I’m reaching Massachusetts line. I’m smoking five cigarettes at a time and feeling just fine. No need to bother for I’m already farther, than I ever needed to go in this godawful show.

Took another bubble bath… wish I could.

Someday nothing will exist.