Sharon Needles is strange enough to be a star. 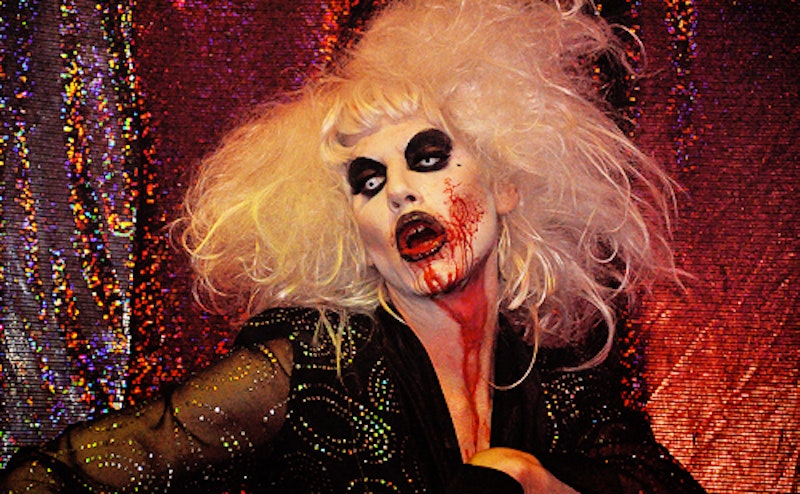 Sharon Needles might be the most important drag queen to hit the pop cultural airwaves since the 1990s. I’m talking about a popularity that extends beyond the circuit of small town and big city gay bars and ribald gay pride festivals. There are, it’s true, queens who get a little bit of fame on the local level and run with it. When I partied at Necto as a college kid in Ann Arbor, Michigan, one of my favorite queens was this spectacular, baldheaded Grace Jones/Kevin Aviance hybrid who went by the name of “Kevin.” Unfortunately, though, queens like him almost never make it to household name status because they serve the local, not the national.

Whether this ghastly, red contacts-wearing Pittsburgh queen wins the current season of RuPaul’s Drag Race or not, Sharon Needles in all of her spookiness—what a fantastic drag name, by the way—has the star power, the intelligence, as well as the Creativity, Uniqueness, Nerve, and Talent to become a high wattage pop cultural personality. She would follow a long line of transgressivists before her, people like Leigh Bowery, Klaus Nomi, Prince, David Bowie, Divine and of course RuPaul, to name a few. I see Sharon with a talk show, a radio show, or a comedy bit. I see her as a red carpet commentator, in high profile ad campaigns, as a disco diva, or next to Joan Rivers on Fashion Police. What makes Sharon’s brand translatable to a mass audience is that she links drag to a specific kind of macabre theatrics. One of my favorite Sharon Needles moments is the first episode during the RuPocalypse challenge where the queens had to come up with some “post-apocalyptic” couture. Sharon beat the runway down and midway started squirting blood out of her mouth and all over the front of her body. A drag queen spitting blood? What the eff?

As if a brilliant apparition, which is what happens when you’re pushing boundaries of any kind, Sharon appears in a moment where more and more queens are serving “fish”—that’s you Tyra Sanchez, Jiggly Caliente, DiDa Ritz, Kenya Michaels, and so on. There’s nothing wrong with that style of drag. But Sharon serves us something a little stranger, and frankly that much more interesting: a fully-fledged, blood spitting, alien, post-apocalyptic, zombie queen.

You know, people liked RuPaul because she was funny, charismatic, stunning, and tall. But she was also just really strange. American culture was gagging, darling, because it had never seen anything quite like RuPaul before. Trust. The1992 single “Supermodel (You Betta Work!)” from her debut album Supermodel of the World, which was brilliantly timed to hit during the heat of the “supermodel” era, became an overnight success. That year the song hit number two on the Billboard Hot Dance Club Songs chart and number 45 on the Billboard Hot 100. Three years later, in 1995, Ru was named the face of M.A.C. Cosmetics, becoming the first drag queen spokesperson for a major cosmetics line. At the time, M.A.C co-founder Frank Toskan told the Toronto Sun “beauty is genderless. M.A.C. is genderless and we couldn’t find anyone who more makeup… He’s a beautiful person who happens to be a black man, a gorgeous woman and certainly ageless.”

A big ass black man in drag promoting a make-up line marketed to women. This is big news, people!

What I’m getting at is that creative strangeness is good. From Michael to Gaga, some of our biggest, most interesting pop stars have been total odd balls. We are entranced by the odd and eccentric. Coupled with her keen wit, impeccably almost Italian Vogue-y sense of high fashion, Sharon Needles has what it takes to break the barrier and do what few other drag queens have done since RuPaul in the 1990s.

So of course my heart nearly jumped out of my mouth the week she stood next to Phi Phi O’hara in the bottom two on Drag Race. The two queens who impress the judges the least have to      LIP SYNC—FOR. YOUR. LIFE! for a chance to stay on the show. Obviously Ru wasn’t about to save the less interesting Phi Phi O’hara—no tea, no shade, gurl—over Sharon. But then some reality TV mess happened and nobody in the bottom ended up going home that night, so everything’s technically fine.

We need stars like Sharon to keep celebrity culture interesting, to say nothing of drag. As a site of pure artifice she has the power to draw us in, making us latch on to her every word because she is so visual. This is part of the reason somebody like Gaga had such an explosion of interest; the simple fact that nobody under the age of 30 had lived through a pop star that looked like her. She reminded us how boring celebrity culture has become. Perhaps in a similar way Sharon Needles reminds us how boring drag has gotten.