In Search of the Perfect Blue Rose 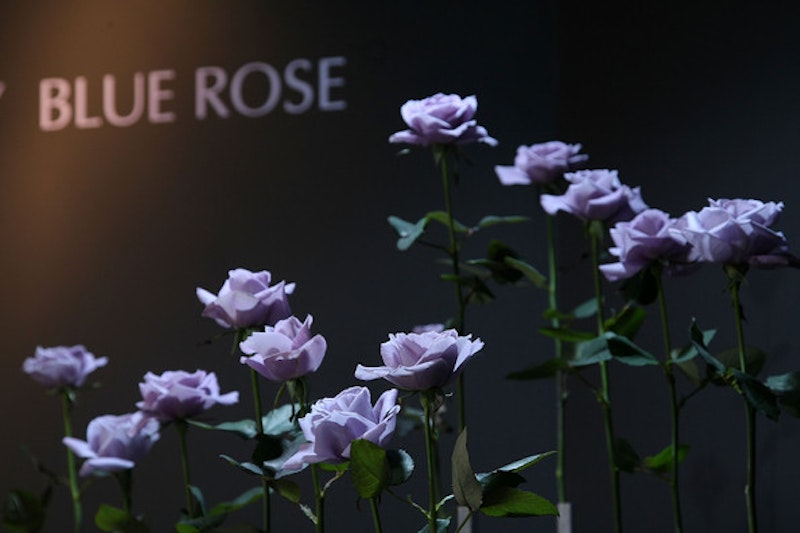 Nine years ago, scientists created the world’s first blue rose. By injecting a red rose with genes from a pansy, then using another gene to trick the rose into hiding its naturally red tint, researchers working for the Suntory company (a Japanese brewer and distiller) produced a new variety of rose, which they named Applause. They market it as the world’s first blue rose—though it’s really more of a mauve or light burgundy.

There were, evidently, a few natural barriers the Suntory scientists couldn’t overcome. Something about the rose’s higher acid content interferes with the pansy’s blue pigment, and the normally recessive gene was unable to completely block out the rose’s natural, dominant red color—at least, that’s how I understand it. While the Suntory rose may be the world’s only genetically blue rose, if you were to see one, you probably wouldn’t notice anything different from dozens of other varieties developed through old-fashioned selective breeding. The closest that rose breeders, and Suntory, have managed to get to a true-blue is a kind of lavender. But still, in 2009, Suntory sold 10,000 stems in Japan, at the equivalent of $22 to $35 each.

It’s hard to get flowers like roses to go blue voluntarily. Blue is a very dull color in the UV spectrum, which is what bees use to find most flowers. Few species of flower even contain genes for expressing blue pigment (pansies, irises, delphiniums, hydrangeas and others) and of them, virtually all the varieties that actually look blue to our eyes have been coerced, through selective breeding and favoring traits that wouldn’t be of any benefit in the wild.

I grew up on a farm, and don’t need a degree in psychology to tell me this is probably the source of my obsession with rare, exotic flowers like blue roses. My parents grow spring cut flowers—the kinds of blooms you’ll most likely find in an Easter or Mother’s Day bouquet. I left the farm for college, and except for brief summer visits I haven’t gone back, but still, whenever I think about plants, I think about the farm. And it’s the farm I fall back on when I try to understand the work that’s gone into trying to create a blue rose.

On the farm, my parents go to some pretty extreme lengths to force plants to do things that are often against nature, but in line with their customers’ aesthetics. They stimulate lilies with natural and chemical fertilizers to speed up growth, they reinforce sunflower stems with wire and plastic so they don’t buckle under the unnatural weight of their bred-to-be-big blooms, they grow roses and gerbera daisies in raised beds like huge flower pots to keep their roots safer from the fungi and bacteria that would otherwise kill them, and they trick chrysanthemums into thinking it’s a different season by hanging light bulbs over rows of plants and illuminating them for hours at night, so they grow taller.

People like my parents have been doing this kind of work for at least as long as we’ve been keeping records. Manipulation of plants is one of the basic elements of agriculture, but during my lifetime, the tools and rules have changed. My parents, and farmers like them, use all kinds of natural and unnatural stimuli to turn their plants into whatever products their customers want, and only recently have we learned another trick, one our ancestors could only have dreamed of. Genetic manipulation, however you feel about its broader, ethical ramifications, is just another means to an end for giving customers what they want.

Wherever there’s a demand for perfection, there will be a supply. Breeders and scientists will continue to bend and break natural laws, and farmers will continue to do whatever they have to do to appease a market that’s understandably more interested in the end result than the process. So whenever I enter into conversations about GMO’s, about organic farming versus broad-scale monoculture crops and factory farms, I think of my parents’ 23-acre farm, and I think of Suntory’s blue rose.

This is what I find familiar in the testimonies and reports I’ve read about the race for the blue rose. Though Suntory’s researchers claimed the prize, they’re obviously not satisfied with either the sales or attention that Applause has earned, so they and their competitors are still trying to find ways around the rose plant’s natural anti-blue biases. And though they use tools and techniques that appear odd to me, their motives are the same.

After hundreds of years’ worth of selective breeding, after decades of research and manipulation, after all of our high-tech tricks, the closest thing to a truly blue rose you’re likely to see will have been created by a very simple, very old trick. I find this comforting: to make a blue rose yourself, you can put a plain, white rose in a vase of blue dye, and let yourself get a little closer to the process.