We're getting used to this stuff. 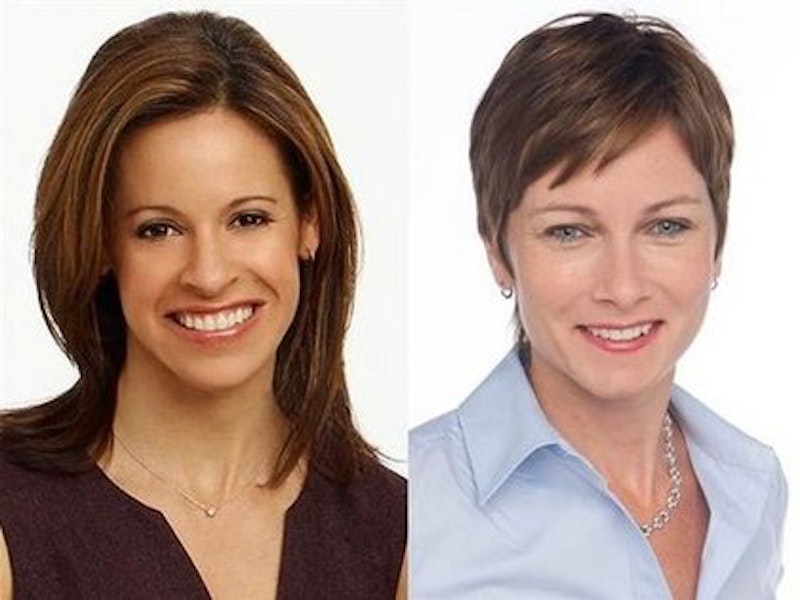 America has been going through some changes lately, sorting out its thoughts. An odd time, a growing time. A time when a headline can look like a put-on but become an anti-climax. For instance, from Salon: “'Today' Anchor Comes Out as Lesbian, Announces Pregnancy.” That's what Jenna Wolfe did last week and nothing much happened.

The event was on-air and took place March 27, sometime before 10 a.m. Wolfe, sitting on a light-cream couch the size of a wharf, told Today colleagues Matt Lauer and Savannah Guthrie that she was going to have a baby. A big moment for her and the girlfriend, she allowed.

The girlfriend, as it happens, is another NBC on-air news personality. Wolfe reads the news on Today's weekend edition. Her girlfriend is Stephanie Gosk, an NBC News correspondent who covers wars and disasters. People carried an exclusive interview with the two of them last week. An accompanying photo shows Wolfe and Gosk, two handsome ladies in early middle age, at home in a living room filled with sunlight, rough-weave natural fabrics and a lot of pale mauve. The ladies are sitting together but not exactly alongside each other. Wolfe is on a settee, Gosk up on what appears to be a sideboard. Gosk has a hand on Wolfe's shoulder; Wolfe has a hand in front of, not really on, Gosk's knee.

The magazine's web announcement of the interview headlined the pregnancy (“Baby Girl on the Way for Jenna Wolfe and Stephanie Gosk”) but made sure to get “coming out” into the lead. Wolfe's quote in the People item took a similar approach. “This is the most exciting thing that has ever happened to us,” she said, and by “this” she meant having a kid. Then the coming-out bit: “But I don’t want to bring my daughter into a world where I’m not comfortable telling everyone who I am and who her mother is.”

On Today everyone let the “coming out” bit drop from view. They carried on as if the girlfriend had been mentioned in many conversations before. The act went without a hitch. “You kept a secret pretty good,” said Guthrie. All she meant was the pregnancy, and the moment wasn't a clanger; it passed right by. That's how casual everyone managed to be.

The rest of the world is being casual too, and in no way is it an act. Yes, news items say Wolfe and Gosk are coming out. But the items are short. There just isn't that much news here, seems to be the judgment. The piece in Salon was four paragraphs, and an interview in the Daily Beast made it up to 10. The Washington Post ran a few paragraphs from the Associated Press. The New York Times appears to have run nothing at all.

The Washington Times, the right-wing apparatchik newspaper, went with a shotgun blast of a headline: “NBC Anchor: I’m Gay, I’m Pregnant and I’m Marrying My Partner.” But the article itself was a re-written press release with a jolly lead (“It's been a busy week for NBC's Jenna Wolfe.”) The commenters at the site are much less friendly, but they're not worked up either. They're derisive rather than enraged. Basically, they don't seem surprised. “All she had to say was 'I am a typical liberal nut-bucket forcing an innocent child into my selfishness!'" asserts one. Another: “All she REALLY had to say was 'I'm an NBC Anchor'… the rest is a given.” The key words there are “typical” and “a given.”

Sean Hannity has been quiet, and so has Rush Limbaugh. Maybe the only thing that Limbaugh and The New York Times have in common is that they really don't mind talking about gays. But this time around they can't be bothered. Five years ago the idea of a network news personality going on air and telling everybody that she was gay and getting it on with another network news personality… it would have been the premise of a Saturday Night Live sketch or somebody's bad indie film. In fact I think the same would have been true a year ago. Now the event itself has actually happened and it's just barely news.

Nobody is surprised. We already knew this was the kind of world we live in, that two women might be in love and, why not, they might work on air for a network. Confirmation doesn't amount to much. “The beauty is that we live in a time where there’s no need for secrecy,” says Stephanie Gosk, as interviewed by People. She's got a point, and last week everyone proved her right.