They love the genre. 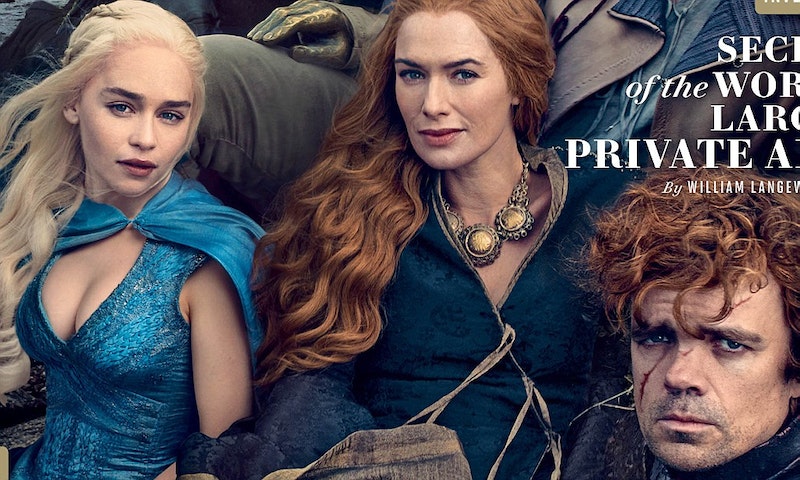 Recently Dylan Matthews at Vox pointed out that not many people actually watch Game of Thrones, or Mad Men, or any of the most-critically-important-shows-on-television (TM). Instead, people watch NCIS, or Big Bang Theory, or, occasionally, reruns of Big Bang Theory or NCIS. One Sunday, in fact, a new Mad Men episode got fewer viewers than eight different Law & Order SVU reruns.

So why do mainstream sites (like The Atlantic, or Salon, or Slate) cover certain shows obsessively while other, more popular shows, are ignored? At first this may seem like a question that needs no particular answer. Critical enthusiasm and popularity are often at odds with each other. Critics loathed The Other Woman, but it did fine with the public; everybody seems to hate Justin Bieber except for all those millions of people who don't. Critical darlings and popular favorites often don't align; why should they here? Mainstream publications are in the business of getting clicks—and, as such, they actually do tend to often cover what is popular. The Atlantic writes about Beyoncé, and Star Wars, and Harry Potter, and Miley Cyrus. As far as films and music and YA novels go, the mainstream is right there with the unwashed, and/or washed hordes. But with television there's a disconnect. Why?

I can't answer that question specifically, but I think in general the choices people make about what is important in art have less to do with absolute critical/popular divide than genre. People usually think of genre as a convenient way to divide up art or literature, but the truth is that genre is a lot more than a categorization system. In fact, as Carl Freedman points out in his book Critical Theory and Science-Fiction, genre isn't really a subset of art at all. Rather, art is a subset of genre. Hemingway's novels are literature; Hemingway's laundry lists are not. A judgment about what something is as genre enables the judgment of whether something is art—or whether something is worth talking about at all.

The distinctions between NCIS and Breaking Bad may not look like a genre divide—both are dramas. But genres can actually be formed or coalesce in lots of different ways. The shows that get talked about tend to come from certain networks (HBO, Netflix) and have certain broad characteristics—as Kailyn Kent says, the Golden Age of Television could easily be called "The Golden Age of Gritty Shows About Conflicted Sociopaths." The genre of television-worth-talking-about may not be specifically defined, but that doesn't necessarily mean it can't be used as a heuristic to decide what's worth covering and what is a laundry list.

When you're looking for it, you can see that genre distinctions actually affect coverage in lots of ways. It's true that Harry Potter is extremely popular—but Nora Roberts is extremely, awesomely popular too, selling twenty-seven books a minute according to a rare mainstream profile in The New Yorker. But you don't see coverage of the latest Nora Roberts novels discussed at the big websites. In part, perhaps, that's because Nora Roberts novels don't often get made into films—but that makes you wonder why these incredibly popular novels don’t get made into films.

There's nothing wrong with using genre as a filter. First, it's unavoidable. Given the massive glut of culture sliding endlessly past our computer monitors, consumers and journalists alike need some way to sort through it. Genre's a convenient rule-of-thumb; it tells you what might be of interest and what will make your eyes glaze over. In many cases, genre provides a community of like-minded people, and even a self-description and an identity. To keep up with Mad Men or Orange Is the New Black is to be a particular kind of person, accepted into a certain kind of community and certain kinds of discussions. It's a fandom. Genre shapes art, but it shapes people too.

The one danger of genre and fandom is insularity. Again, genre sets the bounds not just of what you like, but also of what you see as noteworthy. In that context, it can be easy to forget that other art, or other communities, exist. That can mean, as Vox suggests, that you start to think everyone is watching Mad Men rather than Big Bang Theory.

It can also dovetail, or reproduce other, less pleasant social divisions. Genres aren't always as starkly linked to marginalized identities as the hillbilly/race records division was in the 1920s. Still, race, gender and class are often bound up in genre marketing and consumption, which means that ignoring certain genres in favor of others can have political and social implications. The fact that mainstream publications have so little interest in romance novels seems like it has to do with the way that women, and femininity, are excluded from critical discussions in favor of more male-or-masculine-friendly genres, including YA novels in which the women heroes at least get to kill people. Along the same lines, it's not exactly an accident that mainstream best music lists always seem to rate white rock (generally by guys) ahead of soul music or hip-hop.