On the Gosling-Culkin meta t-shirt exchange. 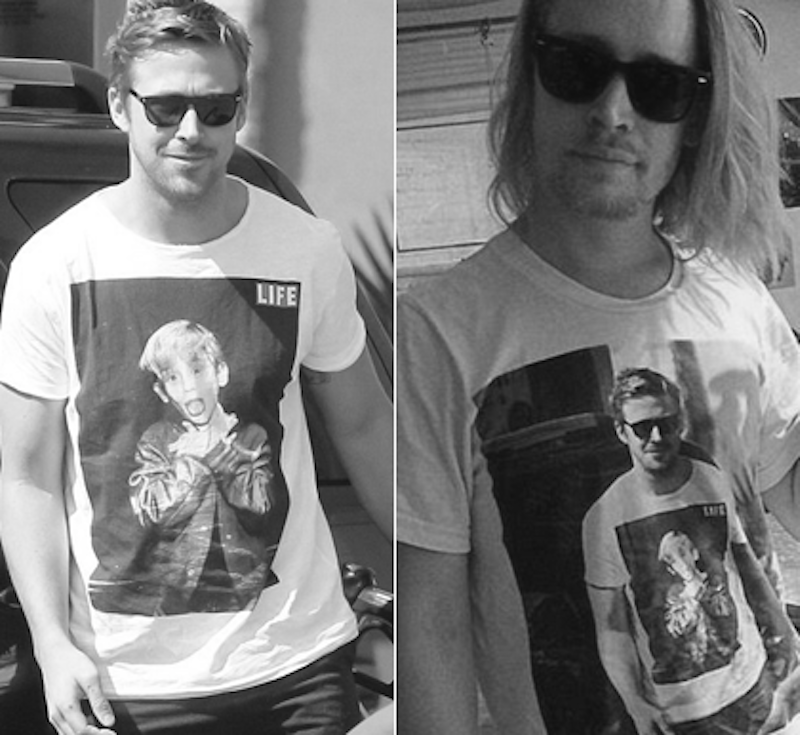 The Droste effect first appeared on the eponymous boxes of Dutch cocoa powder on which a nurse is seen holding the very item, scaled down, by which she has been represented. One then notices a reoccurrence of the latter, smaller box; that is, an even smaller tertiary image identical to the box being held by the secondary nurse, who is in fact too being held in the exact same fashion by the largest thus theoretically “objective” nurse.

This self-referential loop of representation, circa 1900, was not meta in any postmodern sense, but simply an optical gag with marketing savvy, to drag the original image into a vortex of representation. Functioning as a fractal might, of infinite expansion, the image could recede and succeed without end. Of course, this is only theoretical, as such micro-macro vectors are beholden to resolution and canvas size (to borrow from Photoshop terms), respectively.

The highbrow version of this may be Mise en abyme (“placed into abyss”), in which an art form not only contains within itself a part of itself, but also uses such narrative implosion to create a kind of vertigo of meaning. One may think of Hamlet, Pale Fire, or The Crying of Lot 49, each containing a play or poem within the greater entity of itself. Also, there is Synecdoche, New York, or Seinfeld’s underlining smirk of it being the actualization of “Jerry,” whose failed pilot portrayed the show itself, or the supposed documentary whose footage, as implicit outtakes, came to be The Office. So when Ryan Gosling wore, innocently—yet with a spark of meta in him—a t-shirt of Macaulay Culkin, he had to have been mildly complicit in creating pomo-pop fodder; that is, of the latter wearing a t-shirt of the former wearing the latter, etc. And as these images were immediately processed through the Internet—through BuzzFeed, Gawker, Mashable, and the usual suspects—we should’ve expected a collective impulse to join the party. Intermediate-level photoshoppers now would continue this conceptual Droste effect, adding layer upon layers, and inside joke for all, until what was real and what was not became leveled by how convincing the latter was. How all of this might have actually happened, and how it was okay that it didn’t.

One imagines Gosling being texted by a friend, or perhaps formally contacted by his publicist, or agent, about the perfect thing to do. As representation moves towards entropy, may we be free to imagine so many things.