What if the New Daily Show Guy Isn't So Funny?

Judging by his tweets, Trevor Noah ain't much of a find. 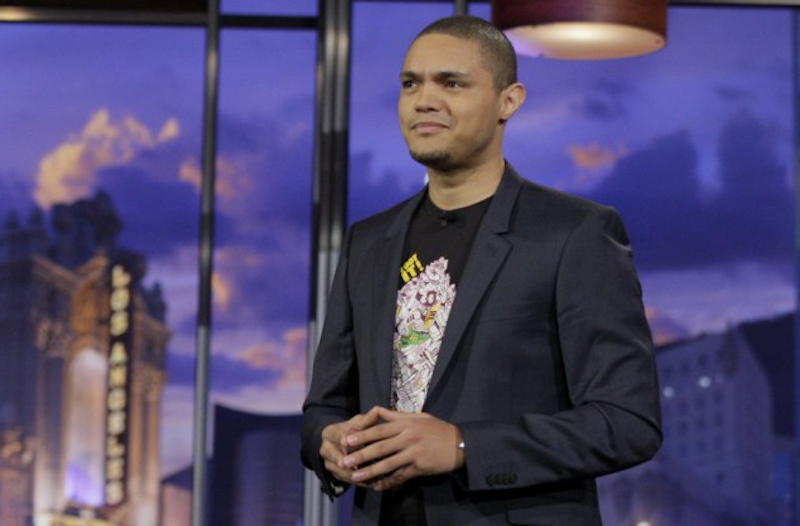 Trevor Noah doesn't seem very talented. I say this having read some of the tweets he did that people are so upset about. Are the tweets offensive? Mostly no. The jokes play off topics that get people hot, but they don't say anything all that ferocious. An example would be the one about feeling extra bad if he were driving a German car and it hit a Jewish kid. One tweet did strike me as mean (but why repeat it), and two others seemed sure to be reviled but could claim truth as a defense (no repeat, this time for my protection). All the tweets, without exception, seemed flat. No snap to the wording, no originality to the thought, and no way to tell these tweets apart from those of your office mate who likes Dan Harmon.

Jon Stewart sometimes uses the word “hacky” when he's talking to us as a comedy pro. I think it's hacky to have an inane statement followed by “said [members of an unpopular group] everywhere.” It was funny during Bush's second term, but a long time ago it deserved to lie down and get some rest. Yet that is the level of the new guy. So far it beats me why he got the job. He is young, good-looking and non-white, and he's gifted with a long frame and wide shoulders. All those things are fine in themselves, but they don't make him worth listening to. Someone is going to have to tell him which are the good jokes and which aren't, and what order they should go in, and how they should be delivered for maximum effect. Jon Stewart was never flawless at any of those things, but he filled the job. The new fellow seems unlikely to have the tools.

If Trevor Noah were a girl, his long legs and handsome shoulders would be long legs and handsome breasts, and I'd have to ask myself if I resented seeing a hot chick getting to mouth off and be the smart one. Instead I wonder if we're sidling up to equal opportunity sexism. TV news has a stable of these v-shaped stallions who loom at us from behind desks. It becomes hard to take them seriously. Like the blondes on Fox, they blur into an advertisement for how nice it is to have certain premium body parts. Now those body parts lay claim to The Daily Show. The little man behind the desk will be gone; the statuesque young deity will be there, wearing a tie and stacking his papers. The divinity will open his mouth and astonish everyone with his well-honed, highly individual wit. Well, probably not. Or, as the phenom might put it, “No, wait...”

Embarrassing quotes.  But not by Trevor Noah. At Salon, the TV critic had a warning for us on Monday: “The tenor of conservative criticism of 'The Daily Show' is about to get very, very ugly. This country spent years embroiled in a debate over whether an American citizen who became the president was 'really' American; what are we going to do to Trevor Noah?” We are going to get upset because the fellow says snotty, or would-be snotty, things about Jews, women and women's weight. The right hasn't had to stick its head in; everyone else is mad enough. That includes the few of us who object to—sorry about the term—hacky attempts at humor.

“He’s going to bring the perspective of a whole other hemisphere to the American conversation,” Salon's critic says of the young South African. Ha, yeah. Turns out the whole other hemisphere includes the Hilarity Hut, second-biggest comedy club in Bayonne, New Jersey. “I hope we can prove to Noah that we deserve him—and that we’ll stand for him, too, when it’s necessary,” the critic winds up. “Because though it’s clear that he’s used to backlash, I’m not sure that we are.”

I don't deserve him, that's for sure. As for backlash, we give just as much as the other side. He's about to get some now.