We'll Never Be What We Were 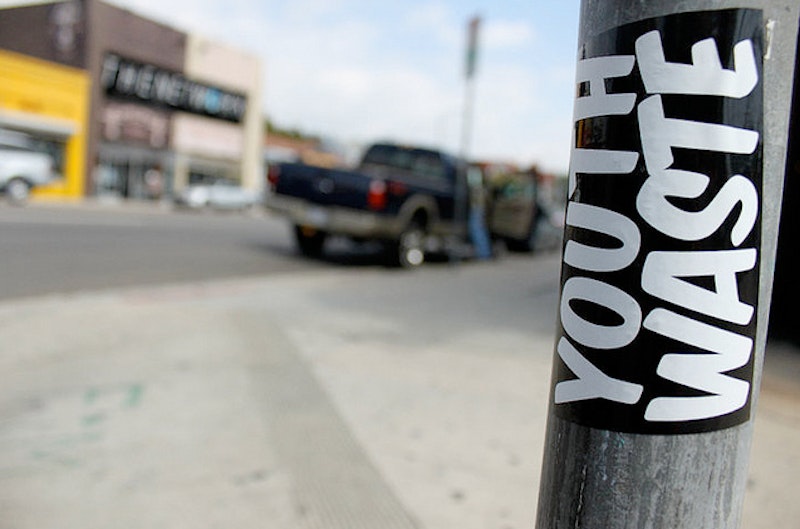 Dunkin’ Donuts: the new depressant. Sick pink walls around drooling bums and cubicle drones contemplating suicide on sticky orange furniture. Employees who hate each other and everything else about the store—the awful food, the customers, and a hellish fluorescent hum. Bratty little powder puffs raised to become Ronald McDonald's new whore. It's a Social Darwinist's villa of disappointment. Just yesterday I was in line when a mother and her eight-year-old daughter walked in. The mother, svelte, talked with her chubby girl about exercise. "I have a new app on my phone that counts how many calories I burn when I do stuff" little princess replied, to a barely registered sigh of approval from her mother. "I want the breakfast sandwich," the girl demands, and the mother limply reminds her to watch what she eats. "But I want it. And I want the yellow donut. I don't know what it is, what it tastes like, but I want it. It's yellow." Donut Mom sounds like she's been beaten down PTSD-style when she orders that eggy breakfast sandwich and "the yellow thing. No, over there. Over there. Too far. Under the munchkins..."

How hard is it to say no to your kids? I've never had to deal with a mewling feed and money bucket for that long, but if you buy them fast food, what do you expect? It'll make them anything but fat and unhealthy? And this notion that it's okay to give in to a kid's demands like that. Most kids are stupid, and one hopes the parent is smarter than them to know that rewarding every impulse blindly is what's killing the human race. I get this feeling as the world gets worse and worse on every front—politics, media, economics, culture, killing sprees—people's defense is to drop out and anesthetize themselves from everything around them, and to stick to a pattern. Nostalgia is cherished and basked in by young people with no future in sight, who would rather talk about Hey Arnold! or Digimon rather than confront the reality ahead of them.

The last 10 years have been a truly insane time to come of age. At this point, 9/11 really does feel like the last time people were jolted out of their comfort zones and brought to life, through intense communal fear, anger, and sadness. That sort of psychological assault could've gone the other way: there was a window of opportunity where our country could've proved itself to be truly exceptional, but we're a bloated, sick parody of what we were. The bitterness and cynicism run deep everywhere you look, and none of the sincerity and reality of post-9/11 America is there anymore. We've been beaten down, by bad news, bad leaders, and an unending stream of death, destruction, and decay brought to you in HD, next to a silly ad for the new Justin Timberlake innuendo romp—and the luxuries we have are all people can handle. Mom doesn't want to deal with princess throwing a fit—she's all out of Xanies.

The youth has no reason to mobilize, and we're stuck with a generation of kids so desensitized to the world, so detached and cool and above the awful and stupid things happening in the news. The future is too immense and incomprehensible, so they check out, give in, and give up. Everyone needs to take responsibility for their own lives, their own philosophy, and their own actions, before they go to customer service for help. Dunkin’ Donuts is a microcosm of what's wrong with America, but it's too easy to just get the yellow blob of sugar.