From The Authority to Moon Knight. 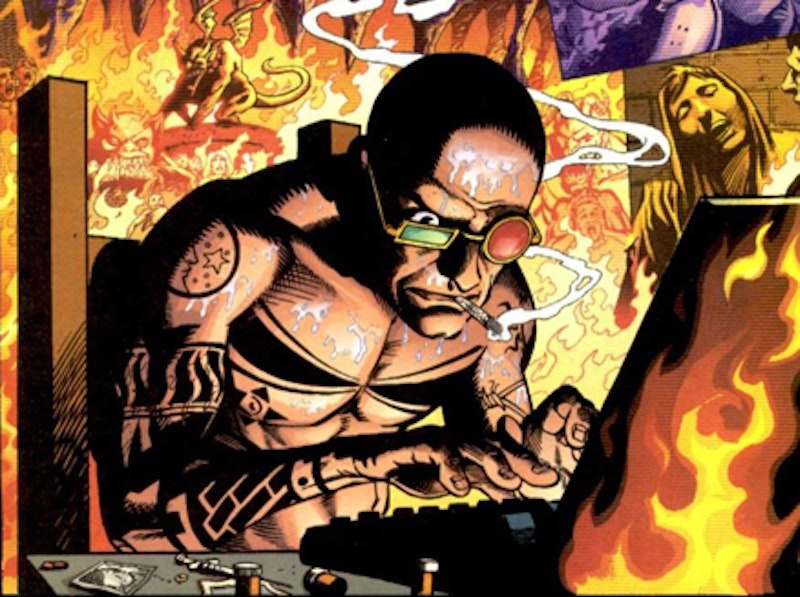 Fanboys everywhere had multiple brain orgasms in November from the fact that Warren Ellis, comics creator, was coming to America. He was only in town for a day or two on business—probably related to his new Moon Knight series at Marvel Comics with Declan Shalvey and Jordie Bellaire—but he found the time to sign books for some star-struck fans at Forbidden Planet in Manhattan. I was one of those fans.

I've idolized Ellis since I was a teenager, since my dad got me hooked on The Authority and other stories far younger than I should have discovered them, and finally got to meet the man himself for half a minute—time which we spent talking about an artist we both love and how sorry I was that I'd brought eight different books for him to sign. There were just too many things I wanted to say to him in the time we had, but if I'd had just a few minutes more, this is what I'd say.

Mr. Ellis, as a kid that grew up in a Caucasian Buddhist household, your heroes made quite an impression on me. In The Authority alone, there was Jenny Sparks, spirit of the 20th century, barely holding back from electrocuting squadrons of extra-dimensional English soldiers, and Jack Hawksmoor, who used the raw power of cities to explode a monstrous rapist's torso. I had—and still have—enormous faith in the power of big cities and gatherings of people, especially as a kid from upstate New York who grew up surrounded by Not Fucking Much.

But that was just from one story. Some time after failing to comprehend your epic Planetary books, a friend slipped me a CD with JPEG files of every issue of Transmetropolitan. He’d gotten them online, a luxury for me—my house still ran on an AOL 128k dialup connection—and we read them together during matching study halls, invariably spent in the library. Spider Jerusalem and his crusade against two presidents were absolutely inappropriate for a scholastic environment, but we knew the librarian and he cut us some slack. Transmet hit me soon after I fell in love with American counterculture kooks like Paul Krassner, Abbie Hoffman and Ken Kesey, scribes for hardscrabble Truth that could, in Spider's parlance, blow the kneecaps off the world.

I spent quite a few years after that re-reading Planetary as it slowly shuffled to completion, perusing your Thunderbolts issues with great fascination as the only interesting part of Marvel's “Dark Reign” event, and contemplating those bizarre tales published by Avatar Press (including the marvellous one-shot Apparat experiment). I was a regular Freakangels reader for some time before getting side-tracked by college.

In fact, one of the few ways I don't know you is online, though you're known as Internet Jesus among your acolytes. You have podcasts, multiple blogs, Web columns, and so forth. You write like a fiend, smoke like a bundle of leaves saturated with English rain, and have more mad thoughts on the hour than most of us are allowed in two lifetimes.

There's room for so much in that expansive skull—superhero plots, dramatic and spoof alike; wild genetic engineering; things that might comprise the whole of Reality; justice; doing the right thing regardless of the outcome, because no matter how weird shit gets here on Earth, some things are just constant.

I've met my idols. They were all inside one man, and they were very kind and English and not disappointing even a little bit.

And when I met them/you, and you signed my dad's copies of Planetary and The Authority, I thought I saw a bit of his sparkling soul glittering in the eyes of a man who inspired two generations of writers, and who will keep on fascinating and puzzling more for years to come.

In short: thanks for my life, Warren, and I'm looking forward to Moon Knight. I bet it'll be extra weird.