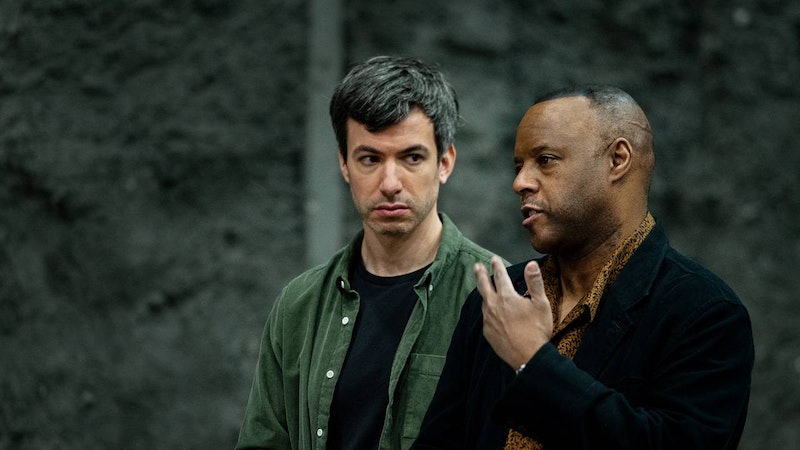 While comparisons to Synecdoche, New York are more than superficial, Nathan Fielder’s new show for HBO, The Rehearsal, is completely different from Charlie Kaufman’s 2008 film in one important respect: Fielder’s searching outward and seeking people he can help, while Caden Cotard (Philip Seymour Hoffman) is just as ambitious but completely solipsistic. A terminal hypochondriac and a lifelong whiner, all he can do with an apparently unlimited stream of money from a MacArthur Genius Grant is replicate his day-to-day life in all of its mundanity inside a life-size replica of Manhattan in a warehouse in Manhattan. You probably know the plot of Synecdoche, New York if you’re familiar with Fielder’s previous work (most notably Comedy Central’s Nathan For You), but Kaufman’s grand 2008 masterpiece still hasn’t quite reached modern classic status. It remains his best work by light years, and the two things he put out in 2020—the novel Antkind and the film I’m Thinking of Ending Things—were the kind of failures that force you to reconsider an artist’s entire body of work.

Synecdoche, New York holds up, because even its most earnest monologues about a meaningless universe and inevitable, infinite death are ostensibly coming from the dying mind of an artist who, in the words of his actor doppelgänger, “could never see anyone but [himself],” undercutting them and making them as much of a joke as the plumber who says he’s “seen boy parts before” or the succession of cruel and unusual doctors. It’s a much darker and more cynical film than anything Fielder has produced, but The Rehearsal has a similar disorienting and overwhelming quality to it, even if Fielder’s only replicating a building or two. He’s posted a Craigslist ad asking if anyone “has something they’ve been avoiding” and to send a video message.

He meets Kor, a trivia night ritualist who lied to his trivia buddies about having an advanced degree; in fact, he just finished undergrad, with a Bachelor’s. He’s gone along with the lie/misunderstanding for years, and is afraid of one friend in particular: Tricia. He’s convinced this woman will explode at him and end their friendship for being a liar. She’s even passed on job listings requiring advanced degrees. Kor can’t bring himself to do this on his own, so Fielder helps him by building an exact replica of the bar where they have trivia night, hires actors to play all the key players, and they rehearse every possible permutation of the night and when to confess. Fielder has to hire his own actor to play Kor so that he can rehearse his own interactions and predict what’s going to happen.

Kor is so insecure that he nearly chokes and doesn’t tell Tricia, a chatterbox, that he only has a BA. But when he does, she “totally doesn’t mind” and “totally understands” why he’d do that. He ends up talking about himself for an hour and a half, and they have a nice evening together, “a friendship strengthened” in Fielder’s words. But Fielder has to confess to Kor that, in order to make sure he could focus on the confession, Fielder got the trivia questions ahead of time and subliminally gave the answers to Kor while they rehearsed. We never see Kor’s reaction to this true confession, but we see the actor’s. He’s really pissed. Who knows if that’s how Kor really felt?

The direction of Fielder’s gaze may be different than Kaufman’s, but they’re both looking at “little people in a sea of many little people,” whether or not they’re aware of each other. The Rehearsal is something much more palatable and less heady, even if “exact” replicas will always unsettle people to a certain degree. What makes the show stick is how disturbing it is at a low level, because it shows so acutely how overwhelming and fundamentally out of grasp our own lives are. There are so many different possibilities and choices in every situation that even if you’re not dysfunctionally insecure like Kor, The Rehearsal will make you feel how acutely our time is running out every second of every day and we are flying blind.