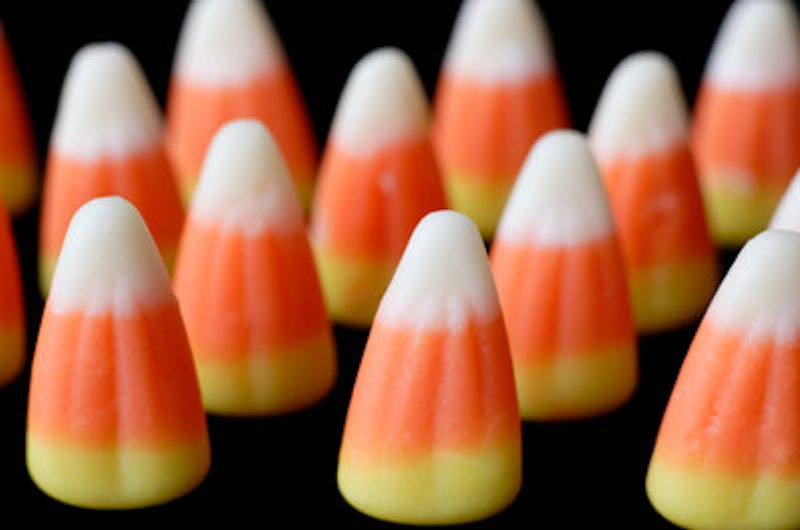 Despite evidence to the contrary—cf. a continued appreciation for Bret Easton Ellis novels, mandarin orange slices in light syrup, and Seinfeld—I do lose interest in foodstuffs, personas, and phenomena over time. The allure of American Idol and ramen noodles and slandering oblivious fashion victims in public eludes me now. But way before I cared about or was even aware of any of the above, I took great pleasure in consuming candy corn in massive, cavity-inviting quantities; I still do.

To appearances, candy corn is three candies in a single seasonally-appropriate package (autumn): the sort of pasty, flavor-less white tip; the denser, more satisfying orange center; and yellow “corn” butt at the end, or, as it’s known to candy corn connoisseurs, “the prize.” (White is totally an autumn color.) And if you eat this stuff the way I used to, by proceeding from the tip to the wider end in a protracted cycle of decapitation by degrees followed by gleeful mastication, you know that the candy corn journey is more journey than destination, and you also know—if you do some soul-searching and are wholly honest with yourself—that beyond hue and maybe consistency, the three segments taste more or less the same.

Differences in flavor are less actual than psychologically manufactured: initially in the late 19th century by inventor George Renninger and perpetuated today by Brach’s, who, according to Wikipedia, sell “enough candy corn each year to circle the earth 4.25 times if the kernels were laid end to end.”

Visually, the triangular candy corn is modern-art bold (solid colors with clear lines of demarcation) and boring in a conventional aesthetic sense (the colors refuse to pop, no logos embossed, being seen eating it isn’t cool). Nobody write songs or novels where candy corn is a prop or a theme or a metaphor; this candy seems to exist somewhere outside of a larger culture of celebrated, branded candies that appear to merit acknowledgement beyond a soccer mom loading up a bowl for a neighborhood Halloween party. I would like to see—no, I would like to write—a movie script where one party ritually pelted another with candy corn, because (a) it would be funny, (b) candy corn is hard enough to sting a little if someone hurled it at you with extreme prejudice, (c) doing so would smooth the way for a scene featuring consenting adults wearing enormous candy corn costumes, and (d) eventually there would have to be a scene where it was literally raining candy corn on somebody, which for some reason is more amazing to contemplate than anything that happened in Magnolia.

And let’s be real: candy corn is like Britney Spears, a scourge that moves huge units but that nobody ever professes to love. I mean, nobody goes off on the classic red-and-white peppermint or hates on Gobstoppers; everybody embraces these things without question. Nobody ever claims that chomping on Nerds is like eating the rocks at the bottom of an aquarium or that slurping down Lik-M-Aid packets is comparable to scarfing kilos of pure uncut strychnine; they just queue up for more.

Maybe candy corn gets a raw deal for the same reason, perhaps, that nobody likes John McCain: it’s been on the scene since the 1880s, and everyone either instinctually mistrusts or stifles enthusiasm regarding stuff that’s really, really old-fashioned and under-designed, because by unspoken rule that’s frowned upon in our society. But even that doesn’t fly, because lollipops date back to the Civil War era and are still enjoyed by orally-fixated tweens and, in altered form, for twentysomethings itching to trip balls in a juvenile way.

The dislike probably comes down, in the end, to the unique consistency of candy corn, which registers for me as a somewhat hard, shaped paste-like substance concealing a dependably mundane deliciousness. The most common complaint offered by the anti-candy corn contingent is that this confection “is like eating wax”; the only reasonable response is something along the lines of “Why have you eaten wax?” The truth, of course, is that nobody has willingly eaten wax, so what’s the harm in enjoying a candy that allows you to pretend that you’re enjoying a buffet feast at Yankee Candle? Not the most penetrating of rejoinders, I know, but when you’re drawn to something that nobody else seems to have any use for, you find yourself scrambling to win strangers to your side by any means necessary, even if nobody understands you because your mouth is full of candy corn.