A NYC ferry ride and a bizarre dinner. 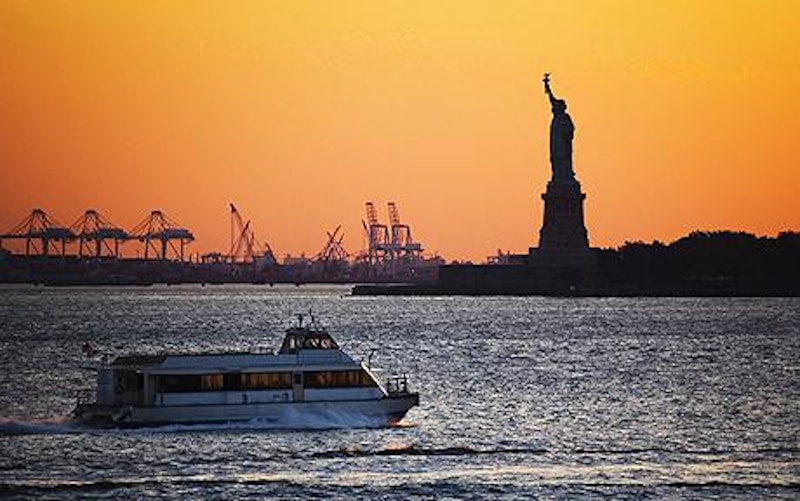 My wife and I took our son to New York City over the weekend to celebrate his sixth birthday. The little guy was thrilled to board the train in Lancaster, PA, but two hours later, as the southern Pennsylvania countryside gave way to the ugly urban landscape of New Jersey, the charm apparently wore off. He complained of being bored and asked if we could go home. Though tempted to storm off into a regrettable rant I was able to distract him with some solar system flash cards. We arrived at Penn Station and immediately headed across the street to Nathan's for a corn dog. My son is a hot dog snob; it's Nathan's or nothing.

We hoofed it for a few blocks before hailing a cab to Pier 83. I’d reserved tickets for a cruise of New York Harbor. We had about an hour to kill so we took a walk around the Intrepid, which is a massive retired aircraft carrier that now doubles as a floating maritime museum. The sheer size of the Intrepid is overwhelming; throw in a bunch of fighter jets on the deck and it's downright awesome. We didn't bother going aboard, as a tour of the Intrepid was likely to take most of the day. We had a boat to catch.

The tour was terrific. A light breeze blew through the cabin as we cruised down the Hudson River, passed the Statue of Liberty and Ellis Island, took note of the construction at 1 World Trade Center, and got a glimpse of the Brooklyn Bridge. We returned to the dock ready to strap on the feedbags. Our ultimate destination was Toys R Us so we walked towards Times Square, and stopped at an upscale burger joint for some lunch. We were seated right away and greeted by a friendly waitress; though we had no idea just how friendly.

After the food was delivered to our table the waitress casually walked by and asked, "How are you doing loves?" Loves? Okay, that's not so weird right? We're from Baltimore where waitresses call people "hon" all the time. A few minutes later my wife asked for some water. The waitress responded, "Sure thing baby love." Huh? That was weird. Was she trying to hit on my wife right in front of me? I thought I was in an episode of Seinfeld, equal parts paranoid and amused; maybe there was a hidden camera somewhere. Had we wandered into a taping of Louie? I assumed the wait staff was getting a big laugh in the kitchen. Perhaps the waitress was just trying to amuse herself, or freak out some tourists, or practicing lines for some off, off Broadway production about the summer of love.

She kept up the act until it was time to ask for the check. My wife headed to the ladies room as the waitress returned with the check. I was unsure what to expect. Would she ask me to father her child? Run away to a commune? Offer a bong hit to my adorable son? Thankfully, the answer was none of the above. She handed over the check and offered a subdued "Peace," overused but acceptable.