Tour the Cathedral of St. John the Divine 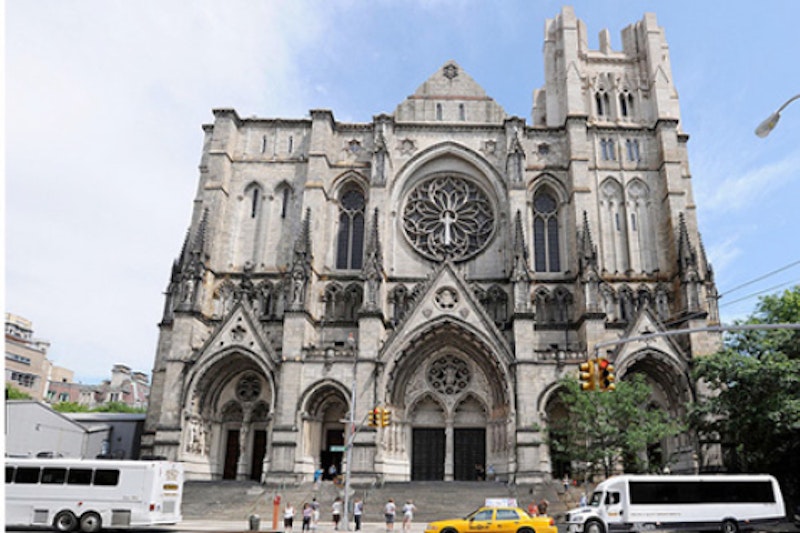 Manhattan’s Cathedral of St. John the Divine is a massive edifice at Amsterdam Ave. and Cathedral Parkway, begun in 1892, with the original architects George Lewis Heins and Christopher Grant LaFarge, the designers behind the décor of New York’s original subway stations between 1904 and 1908, as well as the Fourth Presbyterian Church at West End Ave. and W. 91st St., now the Annunciation Greek Orthodox Church. In the early 20th century, the design was assigned to Boston architect Ralph Adams Cram.

The Cathedral’s been under construction ever since, in fits and starts over the course of more than a century, and is now said to be about four-fifths complete. Work was halted temporarily as a devastating fire ravaged it in December 2001. The Cathedral is now enough of a venerable edifice to contain works by both Rafael Guastavino and Keith Haring, and its Rose Window is the largest stained-glass window in the United States. Adjacent to the Cathedral is sculptor Greg Wyatt’s bizarre Peace Fountain, installed in 1985, that features an Archangel Michael triumphant over a defeated demon and accompanied by giraffes and crabs gamboling on stylized sun and moon figures and a DNA-helix-shaped pedestal. 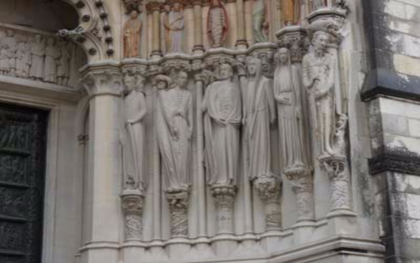 More bizarre still are a grouping of relatively new sculptures on the Cathedral’s western façade facing Amsterdam Ave. and W. 112th St. It was common for prelates of all religions to deliver fire and brimstone sermons, hoping to frighten the faithful into obeying God’s laws; think of Dante’s 13th-century Inferno, or the stem-winding description of Hell given by Father Arnall in chapter three of James Joyce’s Portrait of the Artist as a Young Man. It’s unusual for such depictions of Hell and the Final Judgment to be found in late 20th-century art or literature. But here they are.

Known as the Portals of Paradise, this is an aggregation of odd and unusual figures depicting Biblical prophets and figures from both the New and Old Testaments standing on sculpted pedestals—some of which describe an end-of-the-world scenario—and some scenes which actually came to pass, in a sense, four years after the scenes depicting them were installed.

The presence of such “end-times” sculpture here is no accident. In Christian tradition, the author of the Book of Revelation (Apocalypse to Roman Catholics) was thought to be St. John the Apostle. Recent scholars lean toward an obscure early Church figure called John the Elder, John the Presbyter, or John the Divine, for whom the cathedral is named. The book used bizarre imagery to predict the eventual second coming of Christ: and pop cultural figures from Ken Russell to the Cowsills have employed the images from the Bible’s final book in films (Altered States) and 45-RPM hits (“Prophecy of Daniel and St. John the Divine”). 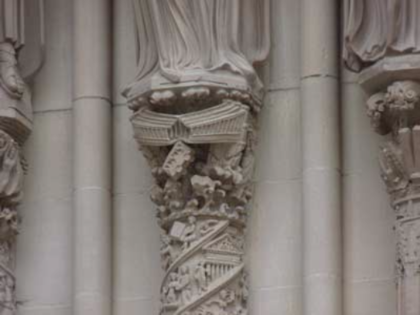 The pedestals predict the Apocalypse coming to New York. In one, the Brooklyn Bridge has broken in half, with vehicles plummeting into the East River. 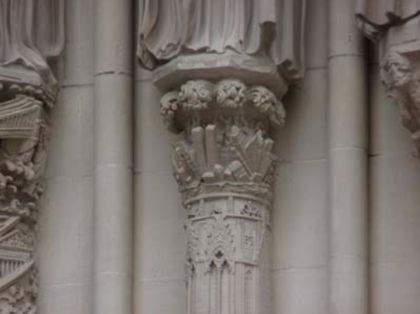 Most chillingly, the pedestal sculptures show mushroom clouds rising over lower Manhattan, with falling towers, including a tottering World Trade Center. Of course we know what happened in 2001, a scant four years after the Portals to Paradise were installed on the formerly blank entranceway. There were no mushroom clouds, but terrorists were successful in bringing down the World Trade Center, a result few considered possible.

Did the sculptor have a line to the Almighty and foreknowledge of future events? I doubt it, but believers may have other ideas.